Prompted By In the Band
5 comments. 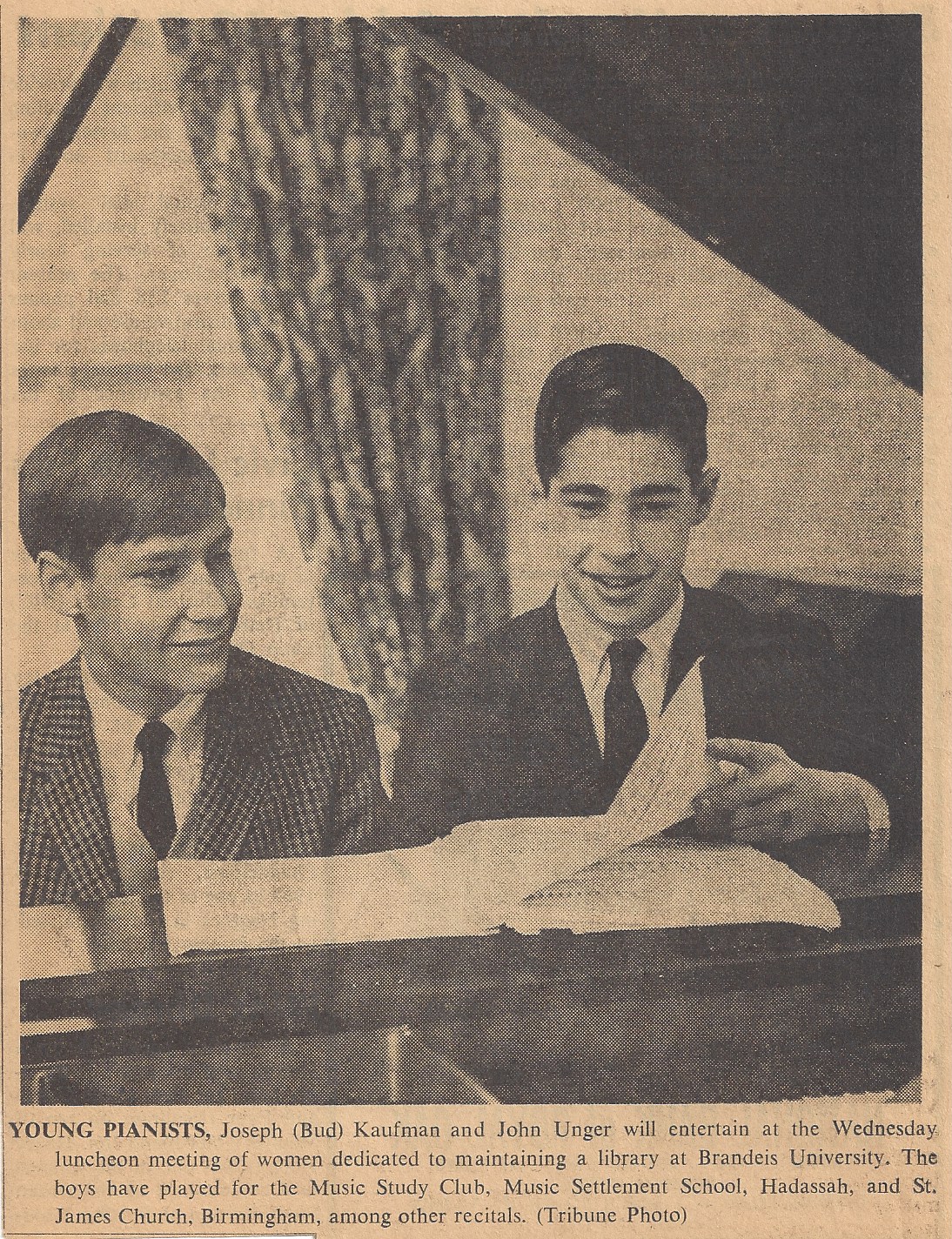 I studied classical piano as a kid, and was pretty good at it, playing Beethoven sonatas and Chopin polonaises in school assemblies and talent shows. Although I preferred solo piano music, that doesn’t mean I didn’t collaborate with other musicians. In fact, my best friend Bud was a fellow prodigy, and we accompanied each other in piano concerti. We gave duo-piano concerts in high school and other venues around Detroit. When we went to music camp at Interlochen, we both competed (and accompanied each other) in the annual concerto competition. We had great fun playing together, and even practicing together was enjoyable.

Under no circumstances, Kodaly told our conductor, will you rehearse anything but my Te Deum between now and the performance.

Still, two-piano versions of concerti are not equal propositions; one piano has the virtuoso solo, while the other has the orchestral accompaniment. In our lessons, our teacher focused on the solo part. The accompaniment was almost an afterthought, and I don’t recall that she ever instructed us on how to play better together.

Although I was a “piano snob” at music camp, I had friends who studied other instruments, drama, or dance. My first year, a cabinmate was in the chorus, and I used to listen to the last ten minutes of their rehearsal before we made the long trek to lunch together. They were working on the children’s chorus part to Benjamin Britten’s War Requiem, and their sound was enthralling. Something magical happened when their clear, pure voices blended. I wanted that.

So, in my third summer, I supplemented piano study by taking operetta and joining my first chorus. No audition was required, and it comprised 500 singers of all ages, a huge unwieldy group that the director, the venerable Maynard Klein, somehow wielded into vague coherence.

We were nothing if not ambitious. The fourth week of camp, we sang highlights of Handel’s Messiah. The music seemed impossible—all those running sixteenth notes! My friend and I walked around camp singing, trying to master our parts. But Dr. Klein somehow pulled it off, and the performance was exhilarating.

After Messiah, we started rehearsing our final program, which comprised a choral setting of Walt Whitman poems and the Te Deum by Hungarian composer Zoltan Kodaly—with Kodaly scheduled to attend. The music, again, was difficult, and much less familiar than Messiah. Not only did we walk around practicing, but we also frequented the music library where we sang along to a recording.

The last week of camp, Kodaly arrived and came to our rehearsal. After listening to a run-through, he conferred with Dr. Klein. Under no circumstances, he told our conductor, will you rehearse anything but my Te Deum between now and the performance. You will devote every possible minute to my piece.

So we abandoned the Whitman songs—that’s probably why I no longer recall the composer—and focused on the Kodaly. And again, we pulled it off. I know, because I bought the recording and listened to it often.

For me, that summer was a revelation. There was something about being one voice among many, about learning to blend and harmonize, about matching vowels and intonation, about being an ensemble.

I was hooked. Two years later, as a college freshman, I enrolled in my college chorus. And twenty-five years later, Patti and I were onstage at Davies Symphony Hall, singing with the San Francisco Symphony Chorus. I was a piano snob no more.