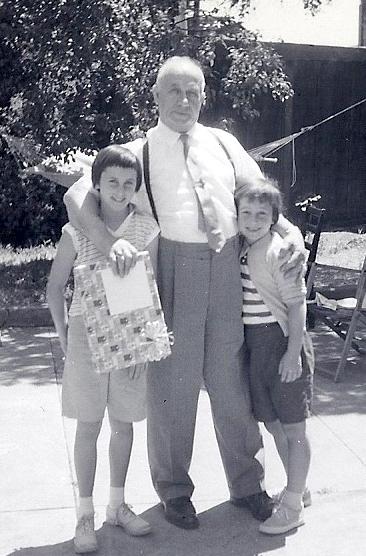 His obituary doesn’t say very much. It’s written in a tiny font and takes up about a square inch of newsprint. I keep the yellowed square of paper in my jewelry box, the one I took with me the day my house burned down in 1991.

He bought us ice cream and pretended to scold us when we stuck out our tongues to lick our cones. When we sat next to him with food on our plates, he'd look surprised and point at something behind us. We'd turn around to look, and he'd have taken a bite of our sandwich. His big blue eyes gave nothing away--he was innocent!

The obituary states when he died: June 11, 1977, but not his age; it lists the names of  family members who survived him, and mentions that he was a former leader of the Jewish Educational Society of San Francisco. His name was Morris, but I never heard anyone call him that. He was Mike to almost everyone, and Grampa Mike to me and my cousins. His own children rarely called him Dad: he was Chief, Father Citrus, Pater Familias, Moishe, and Mike. Mike was his nom de saloon in the days when he owned a bar on skid row in San Francisco. My dad and my uncle were enlisted to work at the bar too, and they all had “bar names.” This was way before my time, of course. By the time I came along, the bar was long gone and had become part of the family folklore.

The obituary didn’t mention the box of stale bread my grandfather always carried around in the trunk of his car. It was his go-to entertainment source for his grandchildren when we spent the day with him. We could go to any park and be ready to feed the ducks and the pigeons. Hours of fun! The aroma of stale bread always reminds me of him. So do flats of eggs, fedoras and ice cream.

Unlike many other Russian immigrants at the time, my grandfather did not leave the old country to settle in Petaluma and raise chickens. Instead, he moved to San Francisco and started his own business as a wholesale  egg distributor–he bought the eggs and sold them to restaurants, bars and hotels. He was the Egg Man! 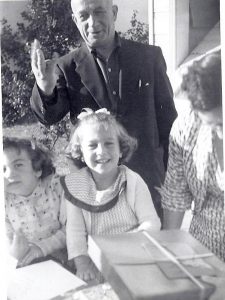 Grampa Mike was always there when we were growing up: birthdays, holidays, ordinary days…and he used to show up with a flat of eggs and maybe some roses that were a little past their prime. He goofed around with us and mugged for the camera. He bought us ice cream and pretended to scold us when we stuck out our tongues to lick our cones. When we sat next to him with food on our plates, he’d look surprised and point at something behind us. We’d turn around to look, and he’d have taken a bite of our sandwich. His big blue eyes gave nothing away–he was innocent!

He loved to write letters and he especially loved to receive letters from his grandchildren. His penmanship was full of flourishes; with curlicues and swoops, the words danced across the pages of the onion skin paper they were written on. He wrote in several languages sometimes, mixing English and Russian and Polish. From the time I learned how to print, he encouraged me to write  letters and stories. I am fortunate to have some of his correspondence to my father, although his letters to me were one of the treasures I lost in the fire. He was a smart man and a thoughtful writer but some of his great business ideas didn’t pan out so well. There were the motels that just happened to rent rooms by the hour, the ill-fated orange distribution idea, and then there was the red rag business (a garage mechanic’s go-to for grease removal), known at the time as The Sanitary Rag Company.

My grandfather died while I was pregnant with the first of the great-grandchildren, so he never got a chance to meet a member of the next generation. But he lives on through the stories we tell about him. I bet that every great-grandchild can tell the one about the time my grandfather concluded an important business meeting with a potential client, reached into his breast pocket for a handkerchief– and pulled out a sock instead. It’s a classic.

One day when I was in my twenties, I held his hand as we walked down the front steps of his house on Turk Street in San Francisco. Though he had some trouble walking by then, his grip was still very strong. He said to me, “It’s a terrible thing to get old.” I remember looking at him and saying,”No, Grampa. you’re not old.” I wasn’t used to hearing him sound  serious and it scared me. Now that I have reached a certain age and have some joint issues, I tell everyone I walk like my grandfather. It makes me think of him and how he usually made light of any physical complaints. 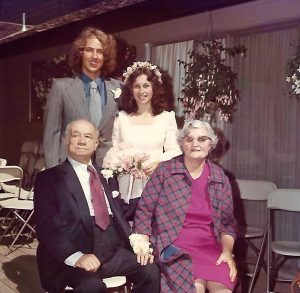 He was a wonderful grandfather, full of fun and tricks to entertain his grandchildren. I’m glad he felt like singing at my wedding, even though the rabbi–a family friend–quietly shushed him.

7 Responses to He Was the Egg Man