Prompted By What We Listened To
4 comments. 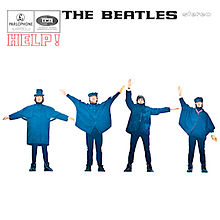 ‘Help’ was the first song on a reel-to-reel tape of Beatles songs that I received from a neighborhood kid who, at 14, seemed to know everything about the ways of the world while I, at 10, knew so little. Told that this was the best music ever made, I played that tape over and over in my bedroom while lying in the dark, trying to decipher the lyrics of such nonsensical songs like ‘Obladi Oblada’ and ‘The Walrus.’ I had just started English as a second language in my 5th grade class, and the Beatles’ lyrics seemed to hold the keys to a whole new world, a world I was eager to explore once I would be old enough to travel outside of Germany.

But without accompanying liner notes, I often misunderstood their singing. For many years I thought that the song ‘Can’t buy me love’ was a sad song about a boy named Bobby who couldn’t find a girlfriend to love. To my untrained ears, the title sounded like ‘Can’t Bobby love?’ Not until many years later when I bought the Beatles’ Red Album and saw the song’s title did I realize my error. But by then I was living in Phoenix, AZ, struggling to fit in as the only foreigner in my high school, and I wished that song lyrics were the only words I misunderstood.