Prompted By Something Wild
4 comments. 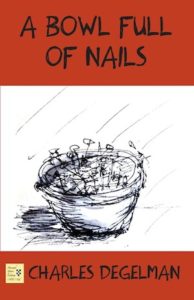 “High Country” is excerpted from Charles Degelman’s novel, A Bowl Full of Nails. Here, Gus Bessemer, our antiwar protagonist, takes a high-altitude break from the intrigue and chaos of his Rocky Mountain counterculture to explore his dance between personal demons and political resistance.

I had been swallowed by the perfect madness of the wilderness.

It was only the middle of August, but I could feel an edge on the high country mornings as I stacked the last of the useable lumber in the Odd Fellows’ Hall. The thunderstorms of mid-summer had disappeared and the sky took on a brassy, polished look.

“Ice crystals,” Norman explained. He and I were soaking up caffeine at the café. “I’ve seen it snow before the first of September.”

A summer of jousts with Jewel, bar fights, porcupine quills, the immolation of Hazel’s building, stolen money, one-lunged miners and now, a gang of freaked-out acid marauders had left me with no room to get my head together in this little mountain town. Maybe the truth lay higher up the hill, in the big peaks.

I packed a sleeping bag, a fishing line, a rucksack full of hiking grub and a bottle of brandy and drove into the National Forest above town. Norman had directed me to the trailhead of an old Arapahoe trade path that climbed through the high passes of the Continental Divide.

“You got to be crazy to wander around up there,” Norman had said. “Air’s too thin and a rock could fall on your head.” He handed me a flask. “Here. Everybody’s fool enough to roam around up there once or twice.”

He stabbed a stubby finger at a blue emerald in the midst of the map’s elevation marks. “Duck Lake,” he said. “Good place to settle in for the night. Plenty of firewood scattered around and you might even catch yourself a fish or two for dinner.” I climbed through the pines to the alpine meadows that soaked up the runoff from the snowfields above. I climbed beyond hunters’ territory into a prehistoric land. By noon I had reached the stunted pines around Duck Lake. The sun arched across the seamless bowl of a perfect sky. I clambered over granite moraines scrubbed by glaciers, threaded my way through talus slopes where boulders rested willy-nilly after crashing down from the great granite walls above. Each had broken loose, created a moment of thunder and then returned to stasis. Now, nothing moved. The chaos of stone surrounded me with silence.

I felt fear. Not of the exposure. I was smart enough to stay away from precipitous climbs. No. The fear came from the wilderness. A ringing, hissing, no-sound silence lay huge and hollow on the landscape, as if the vibrations of a great bell had rumbled down the canyon and fallen silent a million years before. Above me, the steep passes roared like dinosaurs. I was not the hunter, I was prey. Tiger bait like my ancestors, with millennia of rock and cave existence imprinting deep still pools of fear in my collective subconscious. But this primordial terror read like personal fear, my fear, mine alone to succumb to, mine alone to shake off, mine alone to ignore. I chose to live with it and carry on, regardless.

I snorted brandy to calm my nerves and made steady progress on switchbacks that cut across a barren rock face. By late afternoon I was above timberline. I had reached my limit. I was above 13,000 feet and still, the ragged, snow-capped massif flew up and away on either side like the granite wings of a great bat. I stopped. The sound of my breath was immense. It filled the void of the universe. 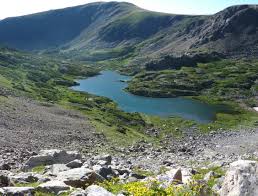 I looked back down toward the green-rimmed lake that would be my campsite. It glittered small in the bowl of tundra and glacial debris that fell away below me. I tried to imagine this same scene in the winter, the wind and snow whipping unchecked through these blasted canyons across the tundra to the pines below. The power of the place rolled over me, an ant, a speck, a nothing. I had been swallowed by the perfect madness of the wilderness.

A hell of a place for reflection, I thought. I barely existed here. How could I think? What plans could I make? Who down below, in that mountain town, who were my brothers and sisters? What had become of the enemy? I took a wad of money out of my pocket. The coins and crumpled bills lay abstract and meaningless in the callused crater of my hand. The wind blew the ball of a dollar away. I let it go and hunkered down on the barren granite slope.

Wind buffeted my eardrums. I was empty, a vessel bound by sinew, tendons, and the pulleys of my knees, ankles, elbows and wrists. I could hear my heart pound. I flexed my hand before my eyes and peered through my fingers. My spirit rushed out of my forehead, flowed through my fingers and dissipated into thin air.

I let go of the oil refinery that had pounded flame into the sky. I misplaced the home I had shared with the tall, thin San Francisco woman in jeans who smoked Camels and marked time, caring only for her two blonde children. I knew nothing of the grim logic pushing the crew-cutted, madras-shirted California boys into the Oakland Induction Center, or why I had pleaded so sincerely with them, or how a heavily armed U.S. destroyer in the Tonkin Gulf could have been threatened by a tiny typhoon-driven Vietnamese gunboat. I pondered the forces of war but they seemed blurred, the recollections of a drunk.

I watched another crumpled dollar bill skip down the slope. I knew that my old man, his khaki pants and blue cotton shirt, his constant search for work, his sudden end, the money, I knew they were all connected. The People’s Theater Collective, Montgomery, Colorado, the Blue Meanies and the draft board, they had come after the searing loss of my old man, but they were all linked. I just couldn’t find the glue. I looked down at my hand. I could wiggle my fingers. I stood up, gained my equilibrium in the swirling heights, and began my descent.

By the time I reached the lake, the sun had dropped behind the ridges to the west. Mammoth shadows strode across the tundra. I found a sandy flat where I could dump my pack and spread my sleeping bag. I gathered deadwood snags for a fire and took a shot of Norman’s brandy. In the reflection of the light cast down from the peaks, I pulled out the hand line, a number three hook, and the salmon eggs.

I found a pool where the water circled slow and deep and I could see the fish grazing, feeding off the algae that grew along the creek bank. The clever little bastards kept nibbling eggs off the hook, but if I gave a yank at just the right moment, I could haul them flopping onto the mossy tundra at the shoreline. I caught a little mess of the browns and cakewalked back to my campsite, grinning like a satisfied bobcat. I lit the snags, gutted the fish, and roasted them in one quick, chilled ritual. The cold came quickly with the setting sun. I half sung, half whistled a song I had learned ten years earlier, when I was still a kid.

Stayed around, played around,
This old town too long,
Summer’s almost gone,
Winter’s comin’ on . . .

I gathered pitch-filled knots of the stunted, high-altitude pine that circled the lake, threw the knots on the fire, and spread my sleeping bag on the sand. I lay back against a log and drank the rest of the brandy before I fell asleep with the wilderness howling above my head. I dreamt no dreams. When I woke up, I knew that I was going to spend the winter in Montgomery, Colorado, hassles or no hassles.

“High Country” is excerpted from Charles Degelman’s novel, A Bowl Full of Nails.