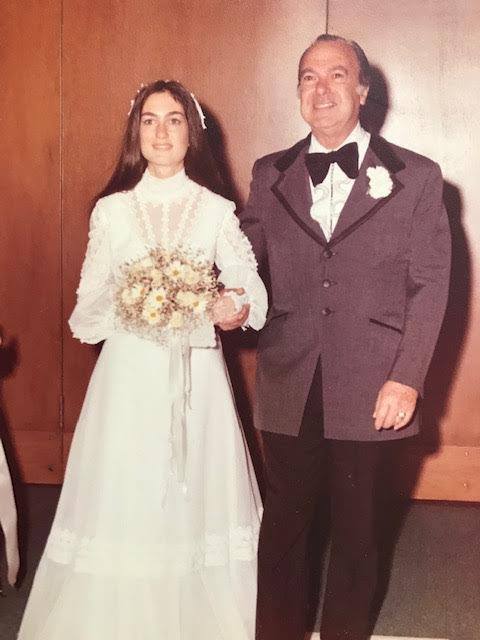 My father had a challenging childhood, the youngest of eight children. His mother was bipolar, long before there was effective treatment. She had her last two children to “cure” her because she seemed better when pregnant (something about the hormones that was not understood). She was in and out of mental institutions by the time he was eight years old and permanently incarcerated when he was twelve. I suspect he was too young to understand why his mother was missing from his life (he never spoke of this with me, nor did the sister who raised him, when I thought to ask her after he died). He sought answers to some of life’s questions for his entire life. He was always a good listener, a kind, gentle, simple man.

He was proud that I did well in high school and went off to Brandeis. He wanted me to find my own path, but wrote me a few notes during my early days at school. One, I turned into a little sign which I hung above my desk. The other, I still have in his original writing.

Fear results from loneliness.
Boredom and fatigue follow.
Let your smile open the door to friendship.
Learn to listen – listen to learn.

Excel in something – so that you have something to give.
Give generously and receive graciously.
To be happy – have a friend – be a friend;
Friendship is Man’s greatest treasure.

(The following is the note still in my father’s handwriting)

“Long ago, Man and Woman were one Creature. Somehow, they became separated.
All our lives we seek for that other half – that will reunite us and make us that whole person.”

My dad was a romantic; he wanted to be whole again after the trauma of his youth. My own mother did not provide that for him.

But the greatest advice came when I returned home after my first year at Brandeis. I was very upset. My first-ever Pap smear had come back Class III (pre-cancerous), and I was very late for my period, though I had always used birth control. My father noticed my sour mood, closed the door to my room late one night and asked what was wrong. This was May, 1971, before Roe v. Wade. Abortion was not legal in Michigan. I came home, aged 18, thinking that I was either going to have a baby RIGHT NOW, or have ovarian cancer, need a hysterectomy, so NEVER have a baby. I was a mess.

“I think I’m pregnant and I’m going to kill myself”, I informed my father. His eyes widened. “Don’t do anything until I get home form work tomorrow. We’ll take a walk and talk about this.” So I waited for him to come him. There was no subject that was off-limits with my father.

We took my dog out for a walk (this was always a way to escape from my mother’s watchful eye and ears; she did not understand anything), and had a long talk. I poured my heart out. I was five weeks late, didn’t have a boyfriend at the time, couldn’t face my judgmental mother and her sisters. Death was the only way out for this 18 year old. He took it all in, calmly. He reassured me. He told me to find an excuse to borrow my mother’s car (claim that I was visiting my old high school), but instead, go see his golf partner, Manny Jacobs, OB-GYN and get tested. He was sure I wasn’t pregnant (I had a history of irregular periods), but Manny would know for sure.

Dad went on to tell me not to worry about Mother and her sisters. He would speak with them, if that was needed. And if I WAS pregnant, he would try and get me a therapeutic abortion in Michigan (those were possible in that era), or if not, he would take me to New York, where abortions were legal. Now THAT is a supportive father!

I saw Manny later that week. After the exam, he also didn’t think I was pregnant (the test would confirm that suspicion), gave me a shot of progesterone, which would bring on my period, but was concerned about that Pap smear. He didn’t believe it (I’d had it done twice by the OB-GYN in MA), yet he wanted to be sure also. This one also came back Class III. He scheduled me for a chryocauterization later in the summer; that is, the lining of the uterus is frozen, the bad cells are sloughed off. I have been Class II ever since.

My period came on a few days later, late at night. My father was already asleep. He snored terribly, so he now slept in my brother’s room. I wrote a cutesy little note and left it on his nightstand, hailing the important arrival.

When my father died, almost 20 years later, my brother and I went through his papers. I found that note in its own folder, saved all those years, as a hallmark of the closeness between father and daughter, and how much I meant to him. He never failed me. 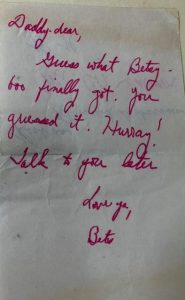