Prompted By How We Met
10 comments. 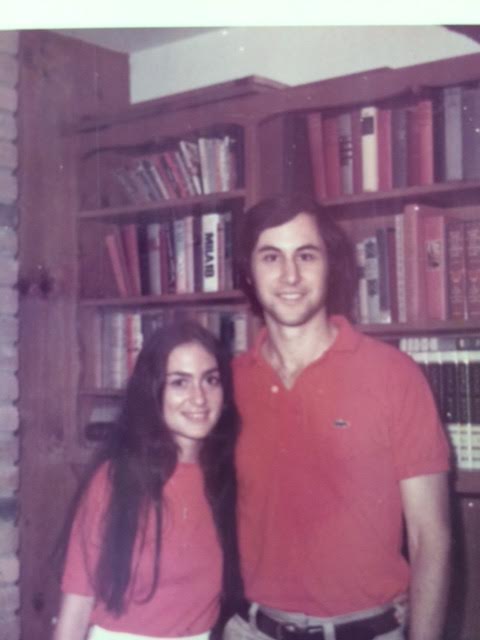 “You know I almost didn’t ask you out”, said Bob. We had been dating six days, were in bed, post-coitus. “A guy named Dan Pfau told me you were a tease.” “Who is this guy to call me a tease (since I, obviously, am NOT!), and how do you spell PFAU?” I queried, quite upset with the whole conversation. I was entranced with Bob and really astounded that some guy I didn’t know was spreading false rumors about me. This was sophomore year at Brandeis. I couldn’t help it if guys projected their fantasies onto me.

I told my suite mates the story. Some knew this guy, Dan Pfau, and described him as dark-haired, about 5’10”. They had described half of campus. They promised to be on the look-out and we spent much of the rest of the school year looking for him. A friend finally pointed him out to me toward the end of the year, walking by. He lived in my quad, was in the back shooting hoops while I sunned myself in a skimpy bikini during exam week. I’ll show HIM! I didn’t bother to put on my cover-up, but flounced past him on my way back inside. Harumpf! I think he noticed.

I continued to date Bob, on and off into my junior, his (and Dan’s) senior year. I took more notice of Dan. He was quite cute and smart. Bob would graduate at the semester, so I began to think about my future. Dan was on my list of eligible men.

At the beginning of November, 1972, I had opening night for “Guys and Dolls”. I played Sarah Brown, the Salvation Army lass. It was also Casino Night, some sort of fundraiser at the Student Union and Dan was a dealer. He wore a tuxedo with a blue ruffled shirt and looked uncommonly handsome. We both went to dinner early in the Union, as I had early call for my show and he had to be ready for the black jack tables. By that point we had been introduced properly and talked a bit. We’d had brunch one Sunday morning and I had thrown him for a loop when I asked him why he had called me a tease (he had heard from someone else…the rumor mill grinds on).

But that night, we had dinner together with a few friends. I was smitten. I came looking for him after the show. A friend’s father took a group of us out for pancakes. Dan went to meet a girl. I asked Barbara about the girl: “Old girlfriend or current?” Barbara’s boyfriend lived with Dan off-campus and told Dan that I was interested.

Word passed. We had a first date; swimming and sauna at the school pool. On my birthday, December 10, Dan showed up at my dorm with a bottle of perfume for me. Bob gave me nothing. I still have the empty bottle in a bottom drawer of my bureau. 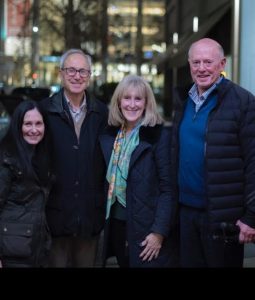 Nov, 2019 with classmate, Sue Goldberg Benjamin and her husband Bob

Tags: tease, PFAU, Brandeis
Characterizations: been there, right on!

10 Responses to How Do You Spell PFAU?