Humbug, or Sightless in the Circus by Charles Degelman
100
(148 Stories)

Prompted By Can't Leave Home Without It
16 comments. 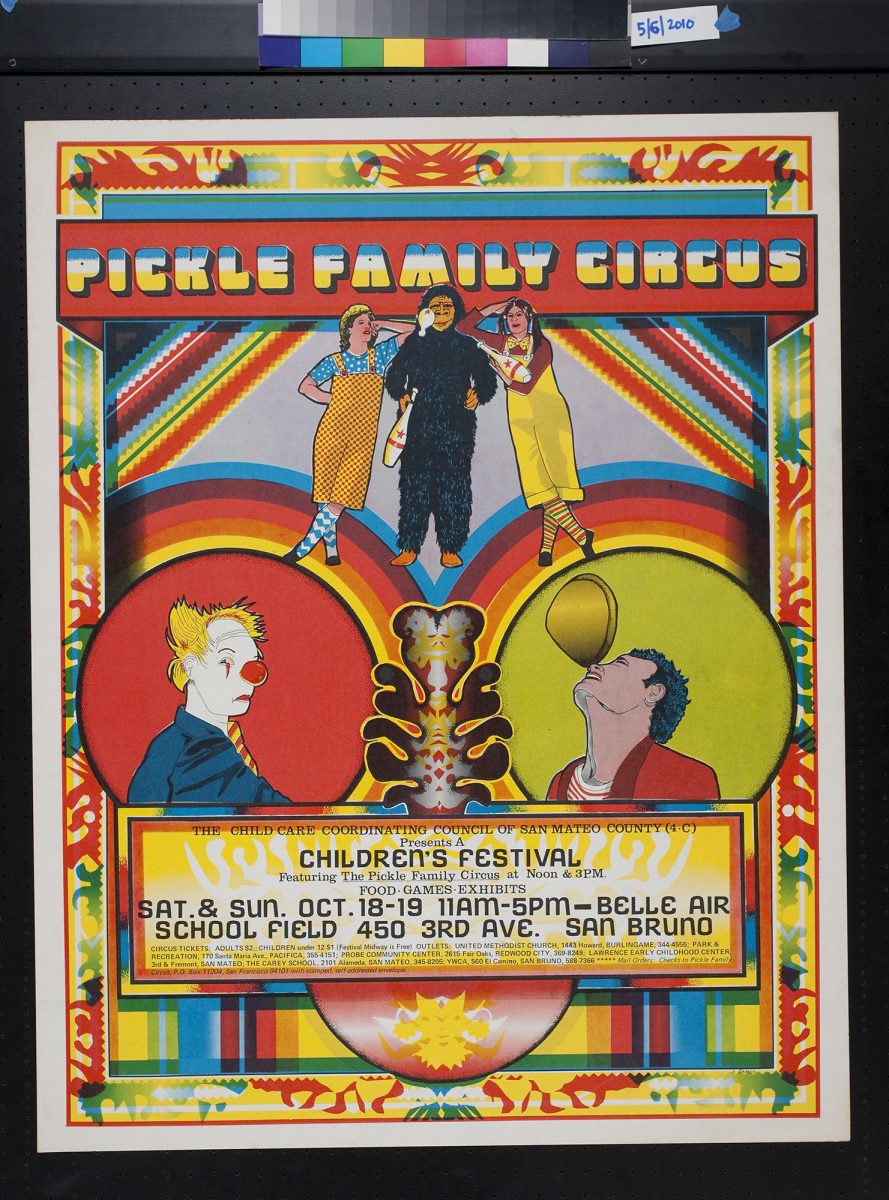 I’ve worn glasses since I was a kid. I was a vain and insecure adolescent, but I didn’t much give a damn for wearing glasses. They gradually become a fact of life, like zits. Nobody called me four-eyes or kicked sand in my face. Besides, I liked to see the world clearly after a year of pre-prescription blur.

I didn’t much give a damn for wearing glasses.

I tried hard contacts when they first came out, but I kept losing them under chairs and tables or dust would get under them, so I’d pop them out and stick them in the watch pocket of my Levis. When I needed to see again, I’d swish them around in my mouth and slide them back onto my eyeballs. That kind of ocular abuse didn’t seem viable in the long run, so I reverted to glasses. 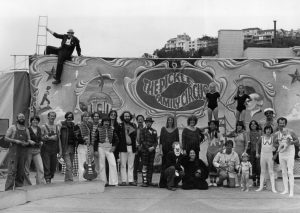 When I toured with the Pickle Family Circus, we’d be on the road for six to eight weeks, traveling in a vehicle caravan up and down the coast from town-to-town. I had an old Chevy station wagon that accommodated a tidy, solo futon, a cooler, a duffel bag and, of course, my axe. A musician never lets his axe out of sight. My amplifier and costume rode in the truck with the rest of the circus gear.

We’d pull into town on a Thursday, drive to a pre-determined spot (we had an advance person), assemble the bleachers rack-by-rack with boisterous teamwork, lay down a bright blue canvas floor with a big red star, circle the one-ring stage, rig the trapeze and backdrop, and assemble the bandstand hopefully under the shade of a tree. We’d surrounded the whole spinning cirque de Pickle Family with a red-and-yellow canvas wall — they don’t call it a circus for nothing — and call it a night.

Friday, Saturday, and Sunday, we’d unleash our unique brand of circus on unsuspecting but respective audiences. Sunday night, we’d strike the circus rig. The band might play in a local joint, or we’d hunker down for the evening at the now-empty circus site. The next morning we’d take off to visit nearby friends or head to the nearest national park to camp, relax, and explore. 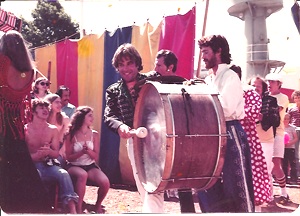 When I lost my glasses on the second week out, there wasn’t much I could do about it. We didn’t stand still long enough for me to acquire another pair, even if I had a prescription.

At first, I panicked. From my underwater POV, reality became indecipherable, from the cars and semis whooshing past, to the road signs, the audience’s faces, to the notations on my music charts. But it’s difficult to stay uptight when you’re traveling around with a bunch of talented, hard-working freaks who improvise around impossible circumstances as a way of life.

I could make out the performers easily enough. They did their acts underwater in my own personal sea, but I knew the characters and their routines. If I didn’t know a tune, I’d just slide up close to my music stand and squint. I knew all my fellow performers by their clothes, hair, voice, and body language, so recognition wasn’t a problem.

Touring by nature assaults you with too much information about your fellow artists. Accordingly, my undersea myopia forced me into a blissful ignorance. If only I couldn’t hear, I thought. But then I couldn’t play, so I had to settle for the myopia.

All went well until one Sunday night after we’d played the weekend in a Corvallis, Oregon fairground. It had been a full moon weekend. When you are in the theater, you become aware of phenomena that might explain the ever-changing mysteries of performance. Granted you’re performing off a script or, in this case, a tightly choreographed 90 minutes of circus acts with music. So, when shit happens you look for why. We took the waxing moon as an explanation. 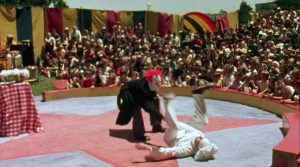 The whole weekend had been weird. The audience felt unpredictable and restless. Props broke. A juggler twisted an ankle. A drunk caused trouble on the midway, a rare circumstance when the midway consisted of fund-raising booths for daycare centers, organic farmers, and environmental groups.

Regardless, the weekend ended, and a small group of us started out for Humbug Mountain State Park, and a beautiful spot I had discovered the year before. We began climbing into the foothills, four cars in caravan, me in the lead, squinting my way along the path to Humbug’s sublime alpine, creek bed Nirvana. Even with the north country’s long summer days, darkness descended as the canyons steepened around us. 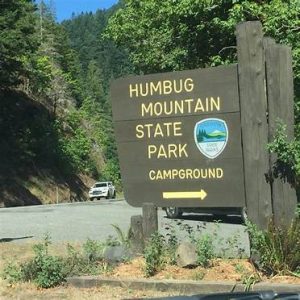 Once away from the flatlands, the road signs thinned but I zero’d in on the familiar park signs that flared in the headlights. I became so intent on using my mole-like sniff-and-recall navigation technique that I failed to notice that the headlights behind me had disappeared.

I pulled off onto a gravel turnout and waited. Had one of my compatriots broken down? Had I driven blithely uphill, numb to the horns and flashing lights that might have signaled distress? Had they turned left when I had taken a right fork? Had I taken the wrong fork? Beset by doubts, I turned around. I knew they hadn’t driven past me.

I groped my way down the dark mountain, my headlights the only sign of life. I had passed a roadside bar, the last commercial establishment before the Humbug National Forest imposed its wilderness on the world. Maybe they had stopped there.

Not a car had passed me going up the grade. Gliding downhill through the darkness, my mind began playing tricks on me. I had been abandoned on the mountainside like Oedipus. Had I been abandoned to prevent me from sleeping with my mother? I didn’t want to sleep with my mother.

Had they all driven over the side of the mountain, like three blind mice, following one another’s taillights into oblivion? Like Oedipus, I was blind. Besides, losing one’s glasses doesn’t compare to sleeping with mom or gouging out your eyes. I had to get a grip.

Through a stand of pines, I caught a glimpse of a large, orange fireball, floating in the distance. Was I hallucinating? Had the nuclear holocaust begun? Was I being tracked by aliens who could prey on my sightless condition to kidnap and dissect me?

The glowing orange ball disappeared behind a ridgetop. As I squinted after it, searching through the haze of my naked vision, I nearly sideswiped the bright yellow VW bug owned, driven, and lived-in by the vivacious roustabout, Zoe. And there they were, the tiny caravan of compatriots, gathered along the rail of an uphill turnout, oohing and aahing at the fuzzy orange moon.

So caught up were they in their moonlight reverie, it hadn’t registered on them that I had disappeared.

Bathed in the bright light of the full June moon, all was forgiven. Reunited, we made our way into Humbug, past the padlocked ranger’s gatehouse and on to my creek side campground, empty but for us. We pulled up, lit a barbecue pit, ate, drank, laughed and tumbled into our various makeshift mobile beds.

From that point on, I resolved never to drive blind again at night. I never did sleep with my mother, but I did discover that — after weeks without glasses — my vision had sharpened considerably to the point where my subsequent visit to the optometrist felt like surrender. Glasses. Never leave home without them. Humbug.

16 Responses to Humbug, or Sightless in the Circus