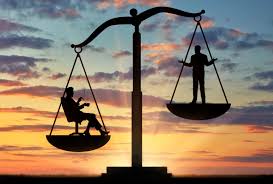 Inequality, something I think will always exist but I hope that there will be less of it in the future.  Due to the Black Lives Matter summer, I have done plenty of thinking about this issue.  Since I live in a town that is approximately 60 % Asian, 25 % white, and 25 % others (Hispanic, Native American, Black and others), it has been a big issue to me.

Inequality and the role of stereotypes

I believe that stereotypes are a big driver of inequality. When we encounter a person who is not like ourselves, we often believe the stereotypes since it is the simple and easy thing to do. The world is very complicated, and that makes it impossible to quickly judge all people individually. However, I have many examples where stereotypes have been proven wrong. For example, we often think of Japanese Americans as very honest, but I have known exceptions. We think of Afro-Americans as criminals, but when I was assaulted by a large white man on the BART transit system, it was two black me that defused the situation. None of the 50 other passengers came to my aid, except my girlfriend started screaming. Inequality exists for other reasons too. For example, many of my fellow college classmates in science wanted to attend the University of California (UC) for graduate school. UC admissions did not think much of graduates from San Jose State College (later San Jose State University), so they went to graduate schools in different states. It was a loss for UC and California, but was an easy way for UC to reduce the pool of applicants.

One of the few, good things the selective service draft did was mix men of all backgrounds together. They quickly learned the fastest way to success was for all men to work together. When a man would complain that he was not going to work with a ***** man, the sergeant’s answer was he only saw army green “so get over it”. I would be in favor of some sort of national service for all young citizens and immigrants. It would help the country and individuals would receive valuable life lessons.

The one idea that troubles me is we too often measure equality in terms of equity of outcome. While it is a good measure of equality, it does not always work. I was the president of a San Jose youth soccer league. We had approximately 50 boys teams and 30 girls teams. It is about the same ratio today. I would not want to reduce the league to 30 boys teams in the name of equality. That would be a loss for many youth soccer players.

In my lifetime, 71 years, I think we have made major progress in equality. Progress still needs to occur. My biggest disappointments in equality is the widening wealth gap and a widening educational opportunity gap for all Americans. I hope progress can be made in those areas soon.

3 Responses to Inequality and Stereotypes