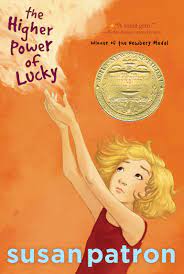 I am a big fan of Lucky Trimble. I find her endlessly engaging, appealing, original, irrepressible. I loved introducing my college students to her when I taught Children’s Literature as part of the Creative Arts core at Massachusetts College of Liberal Arts in western Massachusetts.  I don’t think any child or adult should have been put off by the fact that the word scrotum plays an important role in her story. (None of my students ever were.)

It was the scrotum of a canine, not even that of a boy or a man that got this award-winning book banned from certain schools and libraries.

To be clear, the word appears on the very first page of the novel (the first of a trilogy) that introduces Lucky.  On that opening page, she is listening to—eavesdropping on—a man telling a story that will introduce one of the central motifs of the novel. Of course, we as readers do not yet know that his story is foreshadowing anything, and so we may be a bit startled by the word choices.

Lucky, aged ten and one-half, is listening through a peephole to a 12-step meeting that is taking place in her tiny town in the California desert (Pop. 43, says the highway sign as you enter). She lives in a mobile home with her guardian named Brigitte (the woman is from France and her name is pronounced the French way, Bri-JEET, as Lucky explains to readers).

Twelve-step meetings are apparently one of the only things happening in the town of Hard Pan, besides people just surviving, and Lucky is captivated by the stories that men and women tell of hitting “rock bottom’ and then finding their “higher power.”  She has listened in on meetings of gamblers, smokers, and overeaters (we learn all this in the opening paragraphs), but at the moment the novel opens, she is listening to some alcoholics. A man she knows very well, called Short Sammy, is holding forth, telling his personal narrative.  It’s her very favorite of all the stories she has heard at these meetings of what she calls the “anonymous people.”  The fact that she has a favorite conveys to us that this kid has listened to quite a few of these stories, and obviously, she has heard this one before. She pays attention not only to the content and details of the story but to the way Sammy tells it.  She savors in anticipation that “Sammy’ voice always got low and soft when he came to the tragical end of the story.”

Lucky is not really supposed to be listening through the peephole, but she is supposed to be hanging around nearby. She has a paying gig—one of the only jobs in the whole town for a kid–to use a broom and dustpan and pick up all the litter that is left behind at these meetings.

Short Sammy tells the story of a time he had been drinking rum in his ’62 Cadillac, hanging with his dog Roy. A rattlesnake somehow gets into the car and onto the passenger seat. Sammy, in his drunken state, falls out of the car, and Roy ends up killing the rattler, but not before the snake bites him–on the scrotum.

When Sammy awakens from a drunken slumber many hours later, he sees a lot of blood and a dead rattlesnake but no trace of his dog. He makes a vow to his Higher Power that if Roy is still alive and can be saved, he will never take another drink. It turns out that Sammy’s wife has found the dog and driven him 50 miles to a vet and gotten him there just in time for the anti-venom treatment to work. The dog will survive; the wife will leave for good, and Short Sammy will join AA and begin telling the story of hitting Rock Bottom and finding his Higher Power.

The name of the novel—aimed at nine- to twelve-year-olds but suitable for older teens and adults of any age—is The Higher Power of Lucky. The author is Susan Patron. The book was published in 2006 and won the Newbery Prize for literature in 2007.  As readers of this commentary now understand, it was not even the scrotum of a boy or a man that got this award-winning book banned from certain schools and libraries; it was the scrotum of a canine.

I couldn’t find any data specifying the number of school districts or public libraries that banned the book, but it was reported in 2007 that discussions about banning it were widespread. A New York Times article from February 7, 2007, is headlined, “With One Word, Children’s Book Sets Off Uproar.” “The inclusion of the word has shocked some school librarians, who have pledged to ban the book from elementary schools and reopened the debate over what constitutes acceptable content in children’s books.” The article quotes a librarian from Durango, CO, who claims Patron’s use of the word was, “a Howard Stern-type shock treatment just to see how far they could push the envelope.”

Does this award-winning book really deserve comparison to the antics of Howard Stern (pictured here with his wife)?

Susan Patron appeared on the NPR program, Talk of the Nation, on February 28, 2007, and took questions from listeners as well as the host. One of the callers offered this comment: “I’m wondering if texts like this might be taking the childhood away from the child.” Another caller stated, “Far more objectionable to me is the author’s reference to binge drinking. In the first chapter of her book, Ms. Patron mentioned a character’s consumption of a large quantity of rum.”

The author, who worked for decades as a librarian before writing her first book (this one) in her late fifties, responded to these questions by noting that “children live in the same world we do.” She also commented that “many children are experiencing…trauma in their childhood…on television…in real life. And books can only empower them. It gives them a way to make some good decisions, to think deeply about issues, and to make some choices.”  With regard to Sammy’s story, she believes it is not the quantity of rum Sammy drinks that makes an impression on Lucky, or on readers. “As we know, if we read along, Sammy has hit rock bottom and he has stopped drinking. I think that’s what Lucky finds so empowering and encouraging. He has become an adult that she can trust.”

Here are Lucky’s ruminations, after listening to Sammy’s story, on that elusive word that got the author in such trouble. “Scrotum sounded like something green that comes up when you have the flu and cough too much. It sounded medical and secret, but also important, and Lucky was glad she was a girl and would never have such an aspect as a scrotum to her own body. Deep inside, she thought she would be interested in seeing an actual scrotum. But at the same time—and this is where Lucky’s brain was very complicated—she definitely did not want to see one.”

On the final pages of what turns into an extremely emotional (and very emotionally satisfying) narrative, Lucky comes to terms with the death of her mother and her abandonment by her father. She finally achieves a sense of security, on learning that her guardian, Brigitte, is not going back to France, as she had feared, but is becoming Lucky’s adoptive parent. Finally, she has someone to whom she can ask a question that has been on her mind since page one.

“Brigitte, what is a scrotum?”

“It is a little sack of the man or the animal which has in it the sperm to make a baby,” said Brigitte, in her deep, quiet voice. “Why do you ask about that?”

“It was just something I heard someone say,” said Lucky.

For some reason, Brigitte said, “You know, if anyone ever hurt you, I would rip their heart out.”

Readers of this essay now know every single instance in which the word scrotum is used in The Higher Power of Lucky. And they know some—but not all—of the main characters: Lucky, Brigitte, Short Sammy. But they don’t have any clue why this book earned the Newbery Medal. They don’t know that Lucky named her dog HMS Beagle because he was her constant companion in perusing the world and trying to make discoveries, just as Darwin had a ship of the same name. They don’t know about the lists Lucky often made—such as lists of good traits versus bad traits in mothers, or the list of contents you would need in a survival pack. (She actually had a survival pack, so the latter was not theoretical.)

They don’t know about Lucky’s best friend, who might be on the autism spectrum but that is never mentioned in the book. His name is Lincoln, or more fully, Lincoln Clinton Carter Kennedy. He is a champion at tying all kinds of knots. He also carries out the most useful act of graffiti vandalism I have ever encountered in real life or in fiction, adding two large daubs of black on a traffic sign so that it no longer reads, “SLOW CHILDREN AT PLAY.”  It reads, “SLOW: CHILDREN AT PLAY.”

Readers of this essay don’t know that Susan Patron gives power to this narrative deploying the same techniques that Short Sammy uses to make his story compelling—as Lucky observes in the opening chapter. “Short Sammy didn’t head right up to the good part. To stretch it out and get more suspense going for the big ending, he veered off and told about the old days when he was broke and couldn’t afford to buy rum, so he made homemade liquor from cereal box raisins and any kind of fruit he could scrounge up. This was the usual roundabout way he talked, and Lucky had noticed that it made people stay interested, even if the story got quite a bit longer…” Patron, like Short Sammy, takes readers along some wonderful sidewinding paths before she heads “right up to the good part.”

Readers of this essay who have not read the book will not even realize that this story is brilliantly told in the third-person. I have made numerous references to learning various things from Lucky, so someone reading this essay might have presumed this was a first-person tale. Patron has brought us so deeply inside the head of her ten-year-old protagonist that we almost feel when it is finished that we did read it in the first-person. Instead, it is a most audacious and inspiring example of the use of third-person-limited, where we as readers know and see only what Lucky knows and sees. If we are fortunate (lucky?) we also take on some of her courage, wit, empathy, and spirit of adventure as we tag along inside her enthralling mind, and heart.