Prompted By How We Met
9 comments. 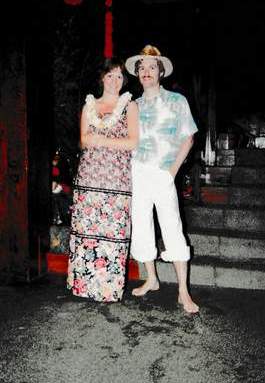 Two years later, a luau at the fraternity.

I attended a women’s college in the ’70s.  That meant in addition to the work of defining our identities as young adults, we were also struggling to help define this social movement called feminism.

One of the women in our dorm was dating a guy at Stanford.  On a Thursday at breakfast, she approached a small group of us thusly.

“Mark’s fraternity is having a party on Saturday night.  Come along, they need more women who aren’t Stanford students.”

“Huh?  So, these guys are either really cool or really hopeless.  (Skeptically..) which is it?”

“They’ll have free food and booze.”

We were savvy enough not to get stuck at a frat party at the mercy of potentially desperately hormonal square dancers.  So five of us went in together and rented a car.  The agency gave us this big ol’ maroon beast of a Lincoln, all they had available that was big enough.  I had a driver’s license and wasn’t much of a drinker, so before it was a social concept, I became the designated driver.

So here we are, curious to see the inside of a real live frat house. Greeted at the door by cute and nice guys — and I’m giving the story away to admit, are among my best friends to this day.  Walk through the entry of this beautiful old home. Collect a Velvet Hammer in the dining room, which was being served from a five gallon cooler. Shouldn’t that have been a clue? Out the door to the back yard decorated in a surplus of hay bales. And I saw Him. Forever after I have believed in Love at First Sight.

He was already talking to one of the other women from my group.  I got nearer, assessed the situation, and as I recall it, I unceremoniously hip checked her off that hay bale and latched on to this guy who changed the course of my life. My college was hosting its own dance on a boat on the bay the following weekend. So in good feminist style, I invited him out for our first date.  This required exchanging phone numbers. I got out my check book (!) and tore my address and phone number off the corner of a deposit slip.

A lasting memory from the evening doesn’t even involve Himself. The drive home required crossing an old, four-lane drawbridge that just skimmed the surface of San Francisco Bay. In the backseat was a freshwoman who had imbibed several too many of the notorious Velvet Hammers.  About halfway across the bay, this head appears in the rear view mirror and an unhappy voice commands “Pull over!”  Uh..no.  There is no “over.”  “Over” is choppy salt water – granted, not too deep at the south end of the bay, but still. A cooler head in the back seat recommends opening the window, which was very nearly successful.  Much of the projectile probably landed on the windshield of any car unfortunate enough to be tailgaiting us that night.  But a memento of the hoedown landed in the back seat to the deep consternation of all.

So the morning after I met the man of my dreams I was cleaning out the inside of a rental car. It took me years to admit publicly that I met my husband at a fraternity party.

9 Responses to It was a fraternity party. (Shhh.)