Prompted By Those We Miss
10 comments. 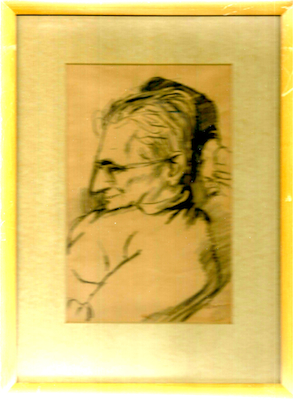 Ever lose somebody without saying goodbye? A friend goes off to war, he wasn’t drafted, he enlisted, it’s been awhile, you’ve gone in opposite directions. No rancor, just divergence, then gone.

A girlfriend slides into her father’s car to drive home too late. You lean down, kiss her through the window. She’s so pretty, her eyes glisten in the night light. “See ya tomorrow.”

“Not if I see you first haha…”

The ones you miss, they run away, they go into hiding, they turn into jerks or you treat them badly. They pile up halfway down the mountain with a truckload of heavy equipment. They shoot up and accidentally overdose, fall off a goddamn cliff… They leave you hanging.

My old man never said goodbye. Did he know what he was about to do? He’d given the subject plenty of thought. Had he told me, I might have snapped back. “What, again?”

I suck in my breath. Such impatience, such anger! But it’s scary to watch someone struggle with constant pain; it sucks the oxygen out of the room and nobody gets to breathe. The pain causes fear, the fear can lead to anger, impatience.

It could have been an accident. It could have been a mistake. He’d been in and out of hospitals for years. I imagined him changing his mind too late when no one was around, when there was nothing left to grasp. I can only speculate that fear and anger had become too much for him. He refused to take thorazine; we would never have recognized him. Later that year, lithium came on the market. But by then he was gone, leaving me to sift through shadows.

I wrote this story to recall how Johnny never said goodbye.

Ayer, Massachusetts exists to serve Fort Devens. A sad strip of main street reveals a desperate reliance on the military — trailers for rent, officers’ uniforms for sale, free alterations, too many bars. The used car lot hawks deals for dogfaces. Tattoo parlors, a dentist, too many lawyers’ shingles, a photo shop offers quick pics looking sharp in your regimental scarf and sharpshooters medal, ideal to send back to mom and the girlfriend before they ship you out.

Gus and his old man, burbled down Ayer’s Main Street in the old Plymouth and pulled up to the bus depot’s dirty windows.

Gus broke out of the passenger door like an escaped prisoner. “Give me the keys,” he said.

Gus’ old man shut off the engine and climbed out of the Plymouth. Gus stood by, ready to jump out of his shoes, hands rammed into his chinos, holding back his rage.

Johnny pulled the suitcase out of the trunk and handed it to Gus. “There ya go,” he offered.

Gus grabbed the suitcase out of his father’s hands. His old man followed him into the bus station.

Gus crossed to the ticket window. Through the bars, a wizened Yankee scarecrow peered at him through watery eyes.

“One for Philadelphia,” Gus said. “One way.”

The old Yankee turned his attention back to Gus. “Philadelphia. Can’t get there from here,” he drawled.

“New York. You gotta purchase a ticket to New York. That’s where you connect to Philadelphia.”

Gus pulled out his carefully folded sheaf of bills and peeled off a brand-new, withdrawn-from-savings $20.

His father called to Gus from the bookrack. “Got your ticket?”

The agent turned and selected a ticket blank from a rack on the wall.

Impatient, Gus faced his father. “No. I haven’t “got” my ticket yet. Hold on a minute!”

His old man didn’t offer to pay. It never would have occurred to him. Money meant nothing to him. Not because he had it; he didn’t. But money was a hindrance, an abstraction. He would bounce check after check on the family account until Gus’s mother would wail in despair.

Gus’ old man held up a paperback from the bookrack, but Gus couldn’t see the title. He turned back to claim his ticket and the change. Fourteen bucks to Philadelphia.

His old man called out, his voice thin and personal in the empty terminal. “You ever read this? McTeague?” He crossed toward Gus holding up the book like a question mark.

“Hey hey hey! The newsstand guy leaned out over his stack of Daily Records and Globes, and hollered past the stub of a cigar that punctuated his round face. “You gonna buy that book, or just borrow it for a while?”

Gus’s father jerked around like a puppet on a string. “Oh, yeah. Sure. How much do I owe ya?”

The newsie looked at him, not sure how this man had reached middle age. “How the hell do I know?” Contempt edged his voice.

Gus rolled his eyes in humiliation but apparently the old Yankee ticket agent didn’t give a shit about Gus’s old man—or his absent-mindedness. “One way to Philadelphia.” The ticket master slid the ticket under the grill.

Gus took the ticket and turned around. “Don’t buy the book, Pop. I don’t need it.”

“No, you ought to read it,” he called out. “It’s about a dentist in San Francisco.” He handed the newsstand guy a dollar bill. “Of course, it’s about much more than that. You’ll see. You can read it on the bus.” He handed Gus the book. The back of his hands looked like parchment.

“Have a good time this summer.” Johnny studied a gum-speckled square of the bus station floor. “This Students for a Democratic Society… Why don’t you join a labor union, you wanna organize people? That’s the way to do it. Get ’em where they work.”

“Never mind. You’ll probably learn something.” A diesel roar rattled the terminal windows. Beyond the dirty glare of sun on glass, the silver and red of the Trailways bus glided into view.

Gus jammed the book into his jacket pocket, and clutched his belongings. His old man followed him to the door and stood there while Gus handed the suitcase to the driver. The driver’s blue uniform shirt bulged over a beer belly; he bent to stow the bag.

Gus couldn’t wait any longer. He climbed halfway up the bus steps and stopped.

The driver navigated his girth past him into the driver’s seat.

Gus looked back down the steps at his father, standing below him in his khaki pants and blue oxford cloth shirt, clenching and unclenching his hands. “Thanks for the ride, Pop.”

The newsstand guy came to the door and called out to his old man. “Hey, mister. You want your change? ”

“Oh, yeah. Sure.” My old man turned and walked back inside the bus station.

Gus climbed the last step onto the bus. The doors closed, the diesel revved. Through the dirty plate glass, he could see his old man talking to the newsstand guy. The bus roared out of the parking lot and his old man faded from view. Johnny never did say goodbye. And neither did Gus.