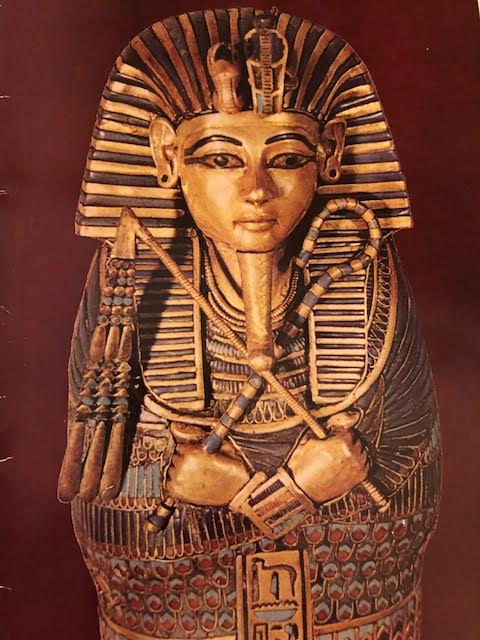 From about 1539 BC to around 1075 BC, the Valley of the Kings, in ancient Thebes, was the burial site for the rulers and some nobility of ancient Egypt. Though known about, the exact whereabouts had been lost through the ages, until archaeological excavations led by Europeans during the time of Napoleon began in the early 1800s. With those explorations came grave robbers, who looted the newly discovered tombs of many of the precious artifacts as they were uncovered, the contents sold through the black market.

In 1899, English archaeologist Howard Carter was appointed the Chief Inspector of Upper Egypt. In 1907, he thought he might have discovered the tomb of King Tutankhamun, the Boy King. It actually took many more years for Carter to make his famous discovery. 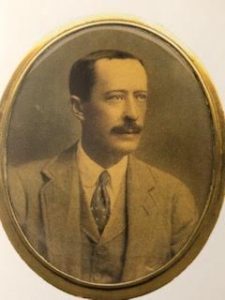 The 5th Earl of Carnarvon

The 5th Earl Carnarvon had had a series of motor car accidents and was advised to winter in a warm climate as a way to recuperate. Always fascinated by Egypt, he traveled to Luxor in 1898 and installed himself in the Winter Palace Hotel on the banks of the Nile. There, he met Howard Carter. The two would become great friends and work together for 16 years. An American excavator, Theodore Davis, held the concession to dig in the Valley, but gave it up in 1914 to Lord Carnarvon, after declaring there was nothing more to find. There were lean years as the Great War depleted the Lord’s estates, increased his taxes and Britain was in a recession. In 1921, Carnarvon told Carter he might have to wrap things up, but Carter pleaded for one more season. 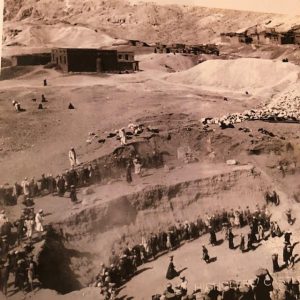 Carter arrived ahead of his patron in the winter of 1922 and began work at a new site. He sent an excited telegram: “At last have made wonderful discovery in valley a magnificent tomb with seals intact; recovered for your arrival. Congratulations Carter”. Carnarvon and his daughter, Lady Evelyn Herbert, hurried to Luxor, arriving on Nov. 23, 1922. Over the next two days, rubble was cleared from the passageway of the tomb and a hole was knocked through the door. As the gap widened, they began to see the antechamber, packed with chariots, furniture, “everywhere the glint of gold”. Further exploration led to three more chambers which included the golden shrine and coffins of Tutankhamun.

He had been a minor king, but this was, perhaps, the most intact tomb ever discovered and word quickly spread about the find, bringing in press from around the world. The Boy King had been lost for 3,244 years but once found, he became one of the most famous Pharaohs of all time due to his magnificent tomb. Everyone wanted access to the tomb and information (and rumors flew about what was being done with its contents). Carnarvon had to manage it all.

He was exhausted and sailed up the Nile to Aswan for some rest, then on to Cairo to deal with authorities about plans for how to deal with the preservation of the tomb and its contents. Worn out, and ill, having nicked a mosquito bite while shaving, the wound became infected.  Septicemia and fever set in. His wife flew in by a specially chartered biplane from England. His son, Lord Porchester (for those of you who watched “The Crown”, this was “Porchy”, the young Queen Elizabeth’s close friend and eventually, her Master of the Horse), arrived from Mesopotamia, now Iraq, where he was serving with the the British Army. Lord Carnarvon died, with his family by his side, on April 5, 1923, at the Continental Hotel in Cairo, months after his great discovery. Porchy was now the 6th Earl.

The contents of the tomb went to the Cairo Museum and in 1963, went on a grand tour to 16 cities across the United States, including Detroit. One Sunday in August, my family was at one of our large Sarason family brunches. I was 10 years old and don’t remember the exact reason for the gathering (perhaps my beloved cousin Alan was in town, but I can’t be sure). I just remember what followed. It was the last day the King Tut exhibit was at the Detroit Institute of Art and my dad decided our family should go see it. Perhaps someone at the brunch said it was a “must see”. This was before the era of timed tickets. Off we went into Detroit. I loved going to the DIA.

The line stretched on FOREVER. It meandered through many rooms of the museum and velvet ropes zig-zagged around the large main hallway. We waited for hours before we got to enter the special exhibit. We became friends with everyone waiting on line with us, but no matter. We all knew the wait was worthwhile. When we finally entered, we all drew a collective breath, like Howard Carter did half a century earlier. He was reputed to have said, “I see wonderful things.” We did too (though the large golden mask did not travel with this exhibit). The Featured photo is the cover of the catalog from the exhibit. I hand wrote “August 1963” inside the cover.  I was so excited by this exhibit that I wanted to give money to the Aswan Dam project in Egypt. My parents quickly ended that dream. I could plant trees in Israel, but not send my allowance money to Egypt.

This spring, before I left to come to Martha’s Vineyard, I did a massive clean-up project in Newton. I went through and threw out old magazines, programs, piles of stuff that had been lying around for years. I went back through old boxes and found the King Tut catalog in a box packed up from my childhood, when my mother sold our house after my parents divorced in 1981. That winter, my brother and I flew home, went through our closets and drawers and determined what was really meaningful to us. At that time, I brought what remained back with me on my return flight to Boston. What had long been buried in a box was found again.

Like so many others in 2011, I became a huge fan of the PBS series, “Downton Abbey”. Sometime during the screening of the show, I learned that it was partially filmed at Highclere Castle, the ancestral home of the Lords of Carnarvon. I did not make the connection to the 5th Earl who supported Howard Carter’s work, though. Not until 2017, when I was fortunate enough to be part of a group that toured the estate and took tea in the main salon (we were not allowed to photograph inside the castle; we had to buy the catalog). I admired the room where Lady Mary came down the stairs, at last, as a bride to the waiting arms of Matthew, but Lady Edythe was jilted by her Lord on the same grand stair case. 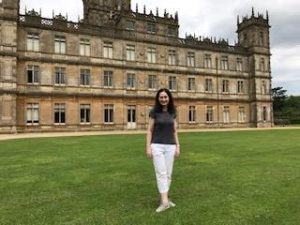 After the group tour, we were allowed to wander the grounds for a bit on our own. That is when I discovered the whole exhibit on the discovery of Tutankhamun’s tomb by the current Earl’s great great grandfather. Since Highclere has become a tourist destination, there is now a whole wing dedicated to the dig with facsimiles of many of the artifacts. 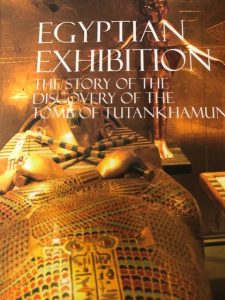 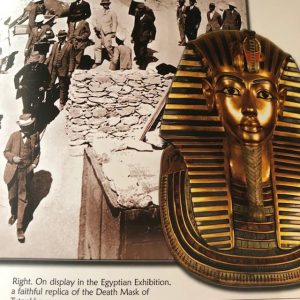 The display was informative and fascinating, adding a tremendous amount to my knowledge of events that took place almost a century earlier, and brought back fond memories of my day at the Detroit Institute of Art as a child; the day I viewed the real artifacts in person.