Prompted By Vacation or Staycation from Hell
12 comments. 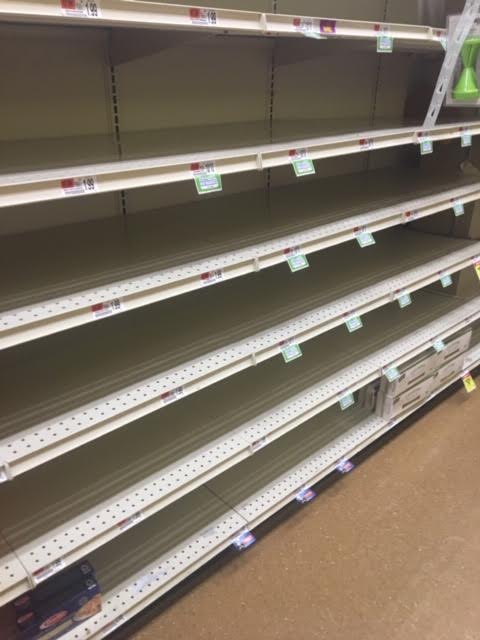 Chorus is canceled. Trips to California and Europe, which would include visits with our children – gone. Gym shuttered. Restaurants open for take-out only. “First-world problems”, a friend teases. He is right. We have our health, we have food and plenty of toilet paper (what gives with the run on toilet paper?).

I did grocery shopping just as the shut-downs started. It was wild, no social distancing, no food! The Featured photo was taken by a friend at our local grocery store. It is the pasta section. I walked out with nothing, but tried again, earlier the next day and found what I wanted.

People are stuck in their homes and bored. We have exercise equipment here. Dan has his treadmill, which I’m now using (though I use it only out of necessity; not really my thing), and last year he bought a fancy, smart trainer for his bike (no more rode biking for him, after three serious accidents). In anticipation of the coming closings, I bought a little home equipment myself. I’ve done classes at my local branch of Equinox for years, so am doing a combination of Josie Gardiner’s Core Synergy class (my favorite!) and mat pilates, alternating with a trot on the treadmill to get my heart rate up. 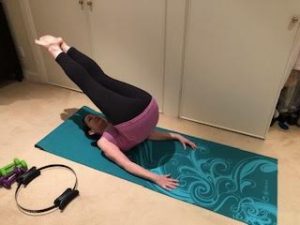 the jack knife position from Pilates 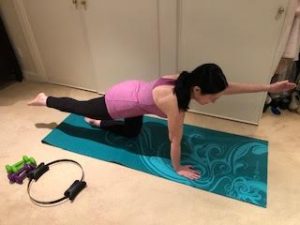 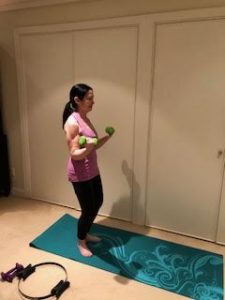 This morning, Josie is teaching Core Synergy on-line through Zoom! We signed up and paid a small fee yesterday and have an email with the call-in number already in our in-box. I’m SO excited! I can’t wait to be motivated by her and exercise with her again. She’s a marvel; 73 years old, former member of Boston Ballet, inventor of Zumba Gold (for seniors), she is known around the world and the BEST there is. We are lucky to train with her. 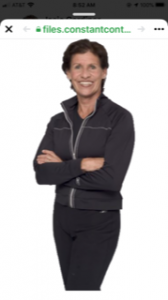 We don’t know anyone who is sick. We can stay in, read, watch plenty of TV, from recorded movies to streaming shows from Netflix to Amazon. We are in touch with both our children on a regular basis.

One lives in San Jose, which has been a hot zone for weeks (when I first wanted her to come visit and checked their status, three TSA agents had already contracted the virus). She frequently works from home, so that isn’t different, but now she is in lock down. She was in a terrible mental state just 10 days ago, afraid of the virus, afraid of global warning, afraid of the presidential politics. She was as low as I’ve ever heard her. She begged for some time off and was given it, which helped a bit. Now we really are in crisis, but she is in a better place to deal with it. I am hugely sorry that we can’t see her in a few weeks, just to soothe her and personally assess her.

My other child is in London. He was supposed to attend a conference in Ethiopia in April, then we would visit in mid-May at the end of a two week cruise through Spain, Portugal and France. He was peeved when DeepMind canceled all their employees out of the Ethiopian conference, several weeks ago, deeming it too dangerous a place to visit (I was secretly relieved). Within two days, travel for Google Europe was canceled for the foreseeable future (DeepMind is a division of Google). David began working from home on March 12. He lives in a small apartment with his long-time girlfriend but at least they have two bedrooms. We are staying in close touch. London is not in good shape. Boris Johnson took a different approach, deciding to let the population get the virus and develop “herd immunity”, but sickening and killing off a large portion of the population in the process before presumably gaining immunity (the virus is so new, no one knows if this is true or not).  Shocking! Due to repeated cuts and underfunding in their socialized healthcare system (sorry Bernie, but it’s true), they have massive problems now, caring for all the sick people. Boris finally understood the severity of the problems he’d created and closed the schools on March 18! David told me on March 16 that the UK and Belarus were the only European countries not to have closed every public place! Of course, in the original travel ban, the UK was exempt. I am not sure why, given what was going on there. Could it be that Trump owns three golf resorts in the UK?

You may have read about people going to Martha’s Vineyard or Nantucket to get away from the virus. We have no plans to do that. We are comfortable here in Newton. But my heart aches for friends from the Vineyard in the hospitality business who have had to shut down restaurants and lay off their employees. They are good, hard working people, for whom life changed in a moment. And I know that is true for all owners of small businesses and restaurants. And for those who did seek refuge on the Vineyard, the first case of COVID-19 was reported on March 19. The hospital has 5 respirators.TOTAL. They cannot handle the influx of “summer people” who have come trying to escape the inevitable.

Everyone is doing the best they can to stay afloat. We have learned the term “social distancing”. We wash our hands raw on a daily basis, while singing “Happy Birthday” a bazillion times. We talk to doctors vis FaceTime or some other computer or phone call way. On the 19th, I called one of my dearest friends on her 65th birthday. Normally, we’d share a delicious chocolate cake. Today, I sang her happy birthday via FaceTime and blew her a kiss. She is trying to keep her piano lesson business alive via FaceTime. We are living in a new reality.