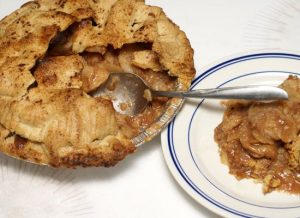 I have some cherished stories from the times that my Mom took vacations to go back east to visit family leaving my father and I home to fend for ourselves. One time while she was gone it was my job to cook for dad when he got home from work. I enjoyed it and it seemed that those times brought us closer. One day I really went all out and I baked my very first apple pie. I had watched Mom make hundreds of them so I did exactly what she did. I made the pie crust, rolled it with a rolling pin, put it in the pie tin, put in the apples I had picked and sliced, put the crust over the top and slit it, and then trimmed the edge of the crust with a fork to give it that great look. Then into the oven and boy did that smell good and even better was that it was finished cooking right about the time we were done with dinner. I was so excited seeing it was my first one and I said, “Hey Dad, I have a big surprise.” He said, “I have been smelling it since I came into the kitchen and boy I can’t wait. Let’s take a look shall we?” With a great amount of pride I grabbed a pot holder and put the pie in front of dad and asked him to cut us a couple of pieces. He got up and grabbed a big knife and went over to cut the pie while I grabbed a couple of small plates and some vanilla ice-cream which he loved on his pie.

I watched as he began to cut the crust but all I heard as the knife hit the crust was, “Thunk!” Then again he tried…. Thunk! I asked, “Geeze Dad, what’s wrong? Is that knife that dull?” And he asked me, “Let me ask you a question… What all did you use in your crust recipe?” So I told him that I used flour and some water and how I rolled it and so on. Then he asked, “How much Crisco did you use?”  To which I replied, “Cisco? What do you mean… are you supposed to put Crisco in the crust?” Then dad began laughing as he told me I had baked a cement pie and I was all bummed out. Then he started with the one liners like, “Well, I suppose we could take it to the mill and get a cutting torch and cut a piece… Or maybe we could try a hacksaw. On second thought, we may need to use a stick or two of blasting powder.” Finally, we laughed so hard that he was able to break a piece of the crust off and we scrapped out the apples and Dad said, “I can’t say much about your apple pie , but that’s some of the best damn applesauce I’ve ever had.”

3 Responses to Looks Aren’t Everything