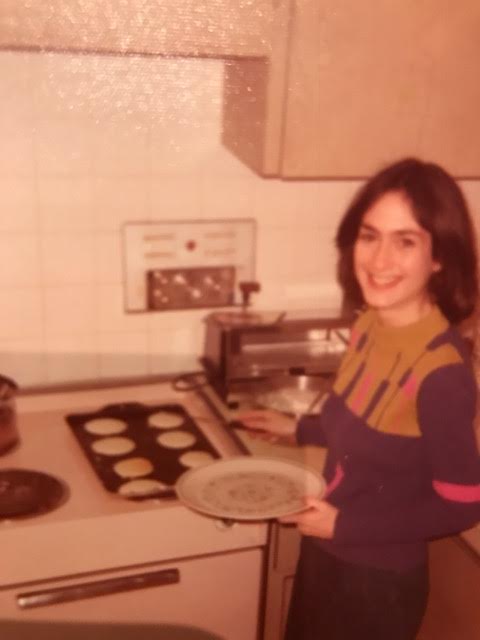 Perhaps because he was the youngest of eight, raised by an older sister once his mother was institutionalized when he was 12, or maybe because he didn’t marry until he was 32; for whatever reason, my father liked to cook and was good at it. If we had Thanksgiving at home, he did all the cooking. He loved to hold barbecues and entertain friends in the summer. He was a sociable guy.

He loved to make breakfast or brunch for family or visitors and that often meant bringing out the griddle and making the “Sarason Secret Family Recipe” for the sweet batter. He added a little vanilla, some syrup, melted butter to grease the griddle and added the rest right into the batter, so the pancakes tasted terrific and were, indeed, his speciality and his delight to make. He made them for me any time I visited, even after I left home. He’d make them for us any time he visited us in Boston. They became my stock-in-trade also. The featured photo is in our first apartment in Waltham, MA, making brunch for some friends in the autumn of our first year of marriage. The griddle was part of a box of household necessities given by my two bridesmaids (you know who you are!). I still have it, though not much call to use it these days. Pancakes are not on my diet. 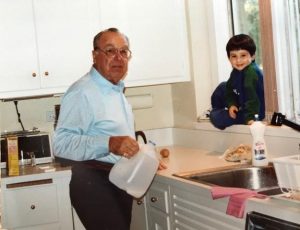 My husband was a management consultant who traveled all the time, so I frequently did “breakfast for dinner” with my kids and took great delight in passing along their grandfather’s recipe for pancakes, particularly since he died when my boys were 4 and 8 months old, respectively. It was a way for me to talk about my dad and share his legacy with his grandsons who would never know him. The kids loved that the recipe was a “family secret”. One came home from nursery school fairly distraught one day. What was the problem, I enquired? He had spilled the beans and told the teachers about the secret family recipe. I assured him it was OK to share such a good thing with other people. His grandfather would be happy to know that his grandchild cared enough about his pancake recipe to share it with others he liked.

The pancake recipe continues. Feel free to eat and share. Ken Sarason would be pleased.