Prompted By Guns Then and Now
23 comments. 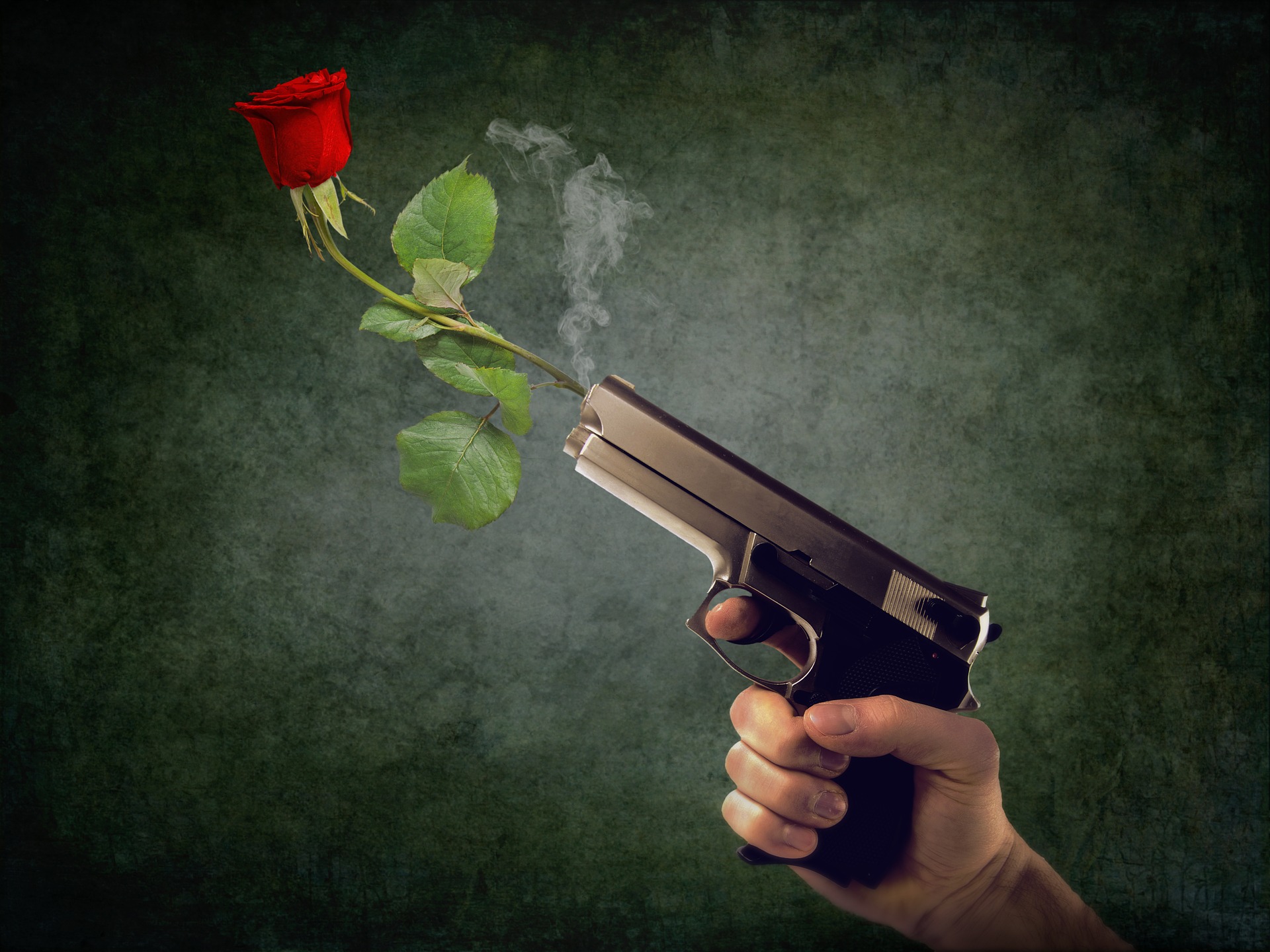 Growing up, I was the only girl on the block, so I played with boys who had toy guns. We enacted a lot of cowboys and Indians scenarios. No one thought much of it. Once I passed that stage I became afraid of guns. Through the 60s and Vietnam, guns meant violence. Criminals used guns, but so did police. Somehow they didn’t cancel each other out.

He aimed and started shooting ... I found the whole practice terrifying.

Then, in my mid-twenties, I met Hugh. He grew up in east Texas, the fourth in a family of seven, with three older brothers. Hugh kept a rifle in his attic. I have no idea why, because the house was in Campbell, a suburb in the Bay Area. Hardly hunting territory, and no need to run off critters. Hugh wasn’t a sporting or violent person at all–just the opposite–so I was puzzled. I wish I’d asked him.

One day, two of his older brothers, Marvin and Edwin, drove in from Texas in a large American car, with the windows open, beers in hand. They wore cowboy hats and boots. We all were having a nice visit on Hugh’s back porch, when one of the brothers suggested doing some shooting. Edwin went and retrieved two large pistols from the trunk (thank God they’d been in the trunk) and set up the now empty cans of beer along the back fence. He and Marvin aimed and started shooting. Hugh took a shot or two, but wasn’t that interested. Edwin offered me a pistol, but I shrank back and covered my ears. I found the whole practice terrifying. For some reason, I never discussed what happened with Hugh, but I began to understand this type of gun use as something regional, maybe cultural.

The next time I had a personal encounter about guns was with another boyfriend, James, in 2000. Entrepreneur, genius (literally), with a PhD, and very eccentric, he grew up in upstate New York, in a rural, poor area, where everyone had guns. He, too, had rifles and pistols in his attic in the suburban Bay Area. It was his rural upbringing. James could defend himself well if needed with a small arsenal, but could probably do much more damage with his amazing computer hacking skills. I felt uneasy and more puzzled than terrified.

During our relationship, James had explained why he didn’t serve in Vietnam and didn’t have to dodge the draft. He was drafted, but the army rejected him when he failed the psych evaluation. They determined that if James thought his commanding officers were doing something stupid and putting him in harm’s way unnecessarily, he wouldn’t hesitate to shoot them. The army got something right.

By this time I could see that, besides all the other issues related to guns, there were cultural and rural-urban divides. I didn’t want to own a gun, but I wanted to understand more about them. In about 2010 a friend named Don invited a large group of people to spend a weekend in the country, to stay at an old house in Sheep Ranch, north of the California gold country, near the town of Arnold. It was a lovely rural setting, with pleasant days and cool nights. That Sunday, Don suggested going to an outdoor range to do some target shooting. I jumped at the chance to learn more.

At the range, I shot a rifle that was somewhat too big for me (the rebound really made my shoulder hurt), and I tried to shoot a medium-sized pistol but wasn’t strong enough to pull the trigger. Someone handed me a .22, and finally, using both hands, I could shoot it. Later, back in the house at Sheep Ranch, Don showed me the components of the pistol and the basic principles of gun safety. My general fear of guns diminished.

Since then I haven’t had direct exposure to guns, but I have made some conclusions about where I stand. These conclusions apply to “regular” firearms only. Semiautomatic and assault rifles have no place except in the military. It’s an outrage that they cannot be banned.

Do I want to own a gun? No, and I don’t think a gun would keep me safe in a suburban or urban environment. Where would one keep it to use quickly enough? In a drawer? Under a pillow? What about others in the household?

Do I understand the appeal of guns? Yes, especially to people who grew up in rural areas with certain cultural values. I think this culture is here to stay in the U.S., both legally and culturally. But guns need to be “managed” somehow.

Do I believe in gun control laws? Absolutely. I think there should be “gun licenses,” just as there are driver’s licenses. Maybe also “possession” limits, as there are for certain drugs. In late-breaking news, the San Jose City Council approved drafting of a law to require gun owners to carry liability insurance. They are using a tobacco analogy to have users pay for any damage caused.

What about kids? I doubt we can stop children, especially boys, from being fascinated with guns. We just need to educate appropriately.

There are no good answers to our gun-owning and sometimes gun-obsessed culture. But we need to do all within our power to keep the people safe.

23 Responses to Making Peace with Guns