On May 10, 1933, university students burned more than 25,000 “un-German” books in Berlin’s Opera Square (pictured below). 40,000 people gathered to hear Nazi chief of propaganda, Joseph Goebbels, make a speech in which he said, “No to decadence and moral corruption!” Sound familiar?

This past January, the McMinn County Board of Education in Tennessee voted unanimously to ban Maus, a Pulitzer Prize-winning graphic novel by Art Spiegelman about the Holocaust, from being taught in its 8th grade classrooms. The book was removed from the school curriculum because board members said some of the material was “inappropriate for students.” They were most upset not about its content depicting the Holocaust, but rather because “of its unnecessary use of profanity and nudity and its depiction of violence and suicide.” 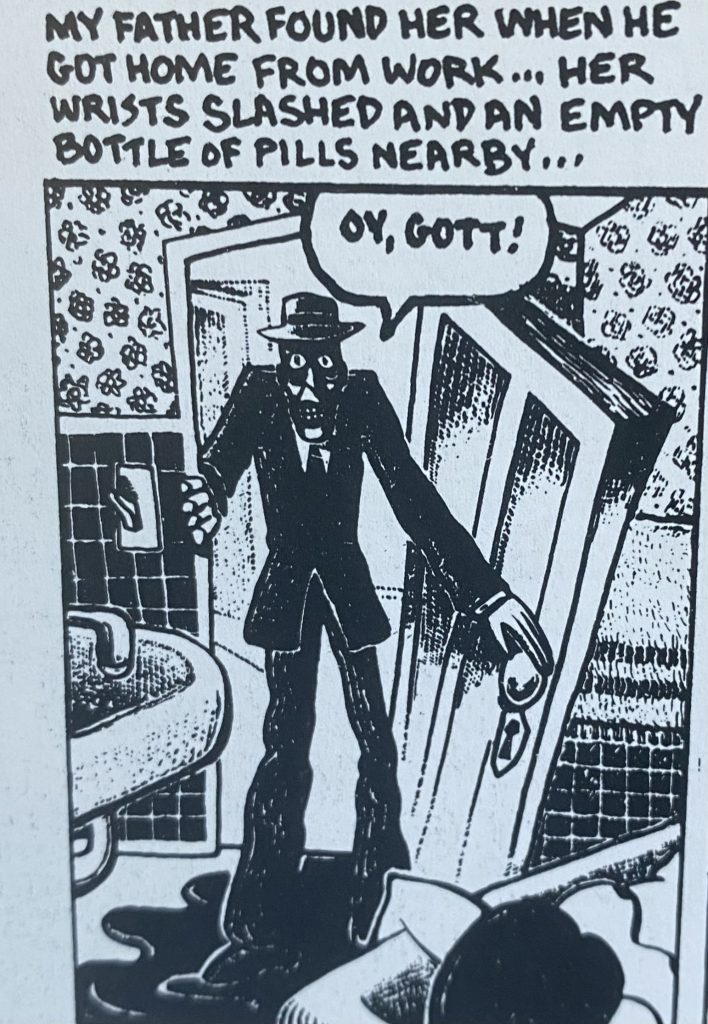 “Nudity” of mother’s suicide in the tub

Nude mice in shower at Auschwitz

The “inappropriate words” included damn, God damn, shut up, shit, and bitch, all words that eighth graders know and use. There were unpleasant images of mice hanging and baby mice being killed. Worst of all, the book includes an image of a partially nude woman (Spiegelman’s mother who committed suicide in the bathtub), as well as some nude mice being sent to the showers in the concentration camp. 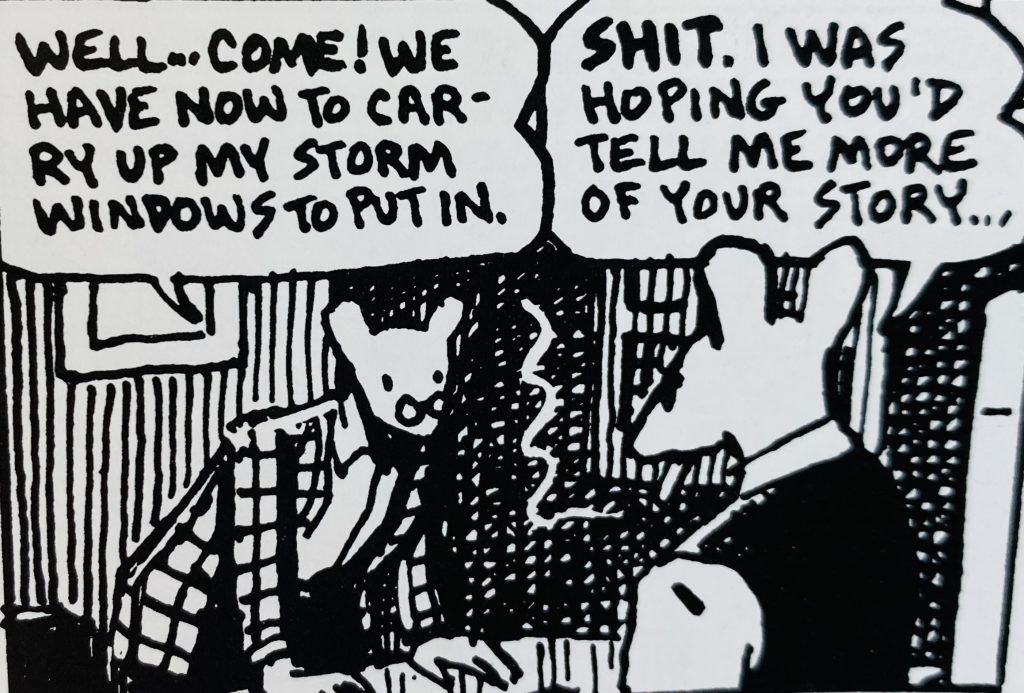 More bad language every 8th grader has heard before

Now I was curious. I had never read Maus, or any other graphic novel. But like so many others who loath the notion of banning books, I ordered two copies on Amazon, one for me and one for my 16-year-old granddaughter. The books took a while to arrive because so many other readers did the same thing that Maus went to the top of Amazon’s best sellers list. Banning a book only makes people want to read it more.

After the Tennessee school board banned Maus, many copies of the book were donated to the local public library. High school students were as eager as my granddaughter to find copies of the book. Emma Stratton, a junior at McMinn County High School, said, “If they take away this book, what else are they going to take away from us. They’re trying to hide history from us.”

I was amazed by my first experience with a graphic novel. Not only did Spiegelman tell his parents’ story of surviving Auschwitz and the Holocaust, but he did so through drawing anthropomorphic mice as the Jews, cats as the Nazis, pigs as the Poles, and frogs as the French. As I read, I understood why the book was the first graphic novel to win a Pulitzer Prize. Spiegelman both created a plot that alternated between his point of view as he tried to entice his father to tell him the story and his father’s recollections, and he had to decide how to arrange the panels containing his illustrations of the plot.

The character of Art’s father resonated with me as Spiegelman captured the syntax of English spoken by a native Yiddish speaker. Vladek spoke exactly like my grandparents. Spiegelman’s difficult and complex relationship with his father reflected what many children of survivors experienced. That a graphic novel could reveal the depth of Artie’s feelings, both deeply angry and loving, is an amazing accomplishment. A book so filled with history and interesting characters should not be removed from school curricula and libraries.

Growing up, I don’t remember books being banned, with the exception of the ones my mother hid in her nightstand. Books like Peyton Place and Lolita were banned in some places for their sexual content, but my friends knew exactly what pages to read and I will confess now to taking a look. I don’t think I read the whole book, just the “good parts,” but I survived with my morality intact. In high school, I know I read Huckleberry Finn, The Catcher in the Rye, The Great Gatsby, The Grapes of Wrath, and Lord of the Flies. All of these titles have been banned but no one objected to them being taught to me. As a high school English teacher, my classes studied these books as well as additional novels that had been banned like To Kill a Mockingbird, Flowers for Algernon, and Catch 22. No one raised any objections. 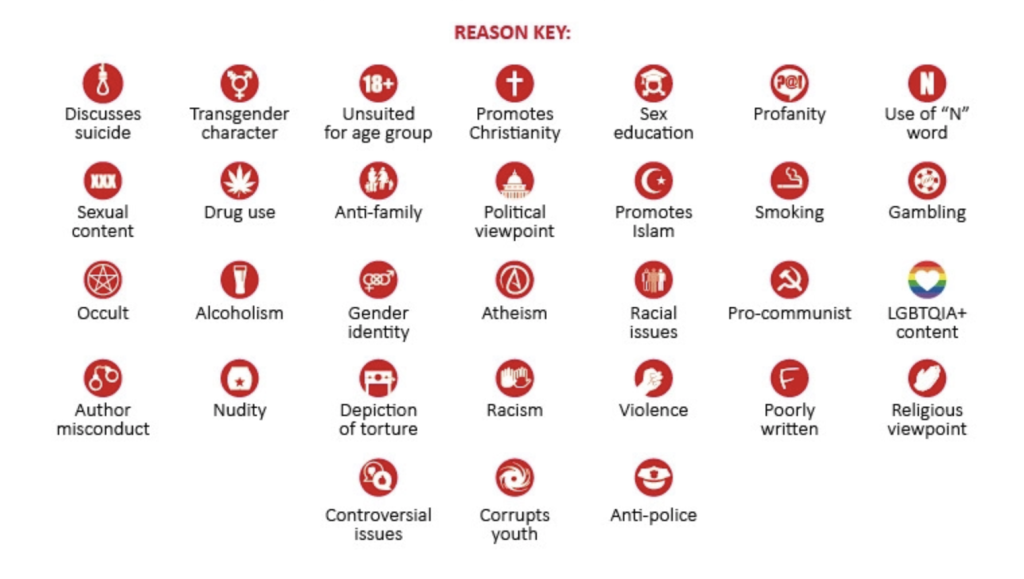 Today’s criteria for banning a book

According to Slate, we are now in an era in which people are pushing hard for more bans of books like Maus. Is this a symptom of increased Holocaust denial? Do some parents fear that exposing their children to ideas and values different from theirs will somehow corrupt them? What is the knowledge and history that must be taught and preserved? Spiegelman wondered if the Tennessee school board members wanted to teach a “nicer Holocaust.” Or perhaps, no Holocaust at all. I have these concerns and more, as parents and state legislators push to ban additional books from school libraries that make students feel uncomfortable about their race or gender.

Banning and burning books is characteristic of totalitarian societies. It is painful to see this trend on the rise in 2022 America. 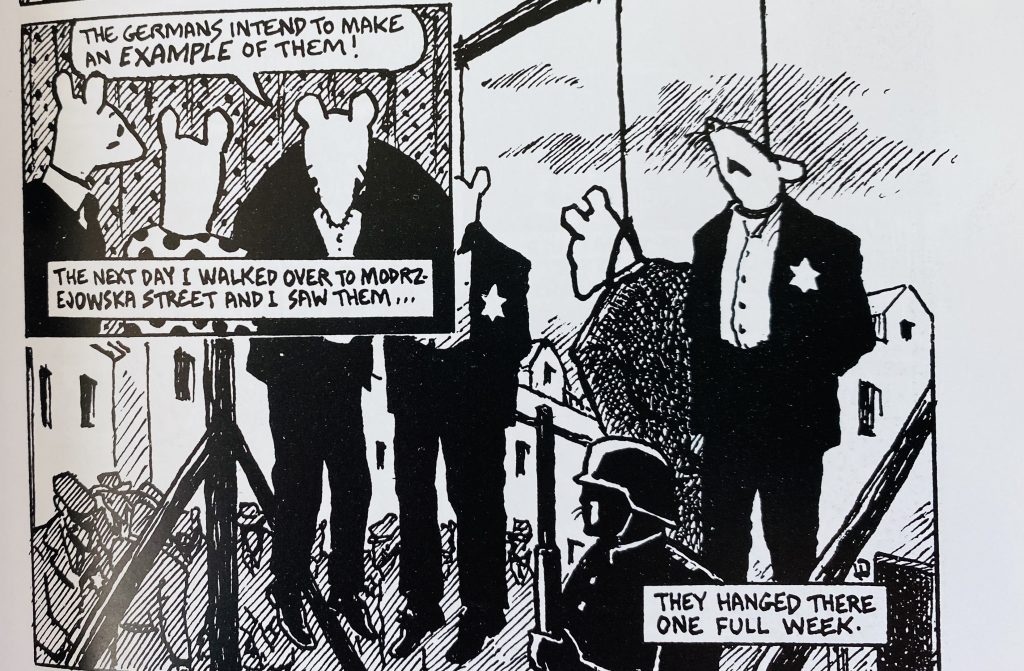 Banned because of hanging mice