Mind the Gap by paulaestelle (1 Story)

Prompted By Mind the Gap
14 comments.

What else could the phrase “Mind the Gap” mean to me but that day I arrived  in London at Victoria Station after three months of French immersion to hear that famous directive as I managed to step off the Chunnel train and adjust my ear to English?

It was disorienting and absolutely wonderful! As though I were being told everything will be easier now. No fog of translation to work my way through! I will know what is being said to me. I had imagined myself as  the oldest Immersion student to try Paris ever. There was also the blatant fact that I probably was the worst student ever to try the patience of my hostess, lovely  Mme Bonfils, thirty years younger than I, with a three year old Mousquetaire named Baptiste at her side. Anne was so kind, too kind actually, because she  felt so bad for me or was so impatient with my fumbling French she switched to English almost immediately. So after weeks and weeks of daily French classes and blissful wanderings all over Paris where virutally everyone I tried my little French sentences on  switched immediately to English, here I was on my way to visit my aunt and uncle in St. Ives, where I would speak English, English and only English! It was a vacation!

(I spent the week obsessing on how to say Mind the Gap in French: Attendez l’ecart? Faites attencion a l’ecart? Or would there be a S’il vous plait? After all, it would be in France.) 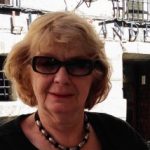 14 Responses to Mind the Gap

Those Were The Days My Friend
by Kevin Driscoll