“To see into another’s heart, Eyes are the place to start” by Jim Willis
10
(18 Stories)

Prompted By The Eyes Have It
19 comments. 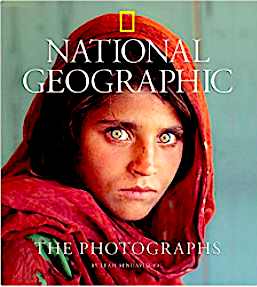 Sharbat Gula, then only 12 years old, captivated readers of the June 1985 National Geographic. The photo of “The Afghan Girl” was taken by photojournalist Steve McCurry.

This week’s prompt, “the eyes have it,” can have many applications, and clearly all of them are not related to glasses or eyewear. For example, our eyes can — as the saying goes — be the window to the soul.

Science calls it Iris Recognition technology. Most humans call it looking into the windows of the soul.

Poets have known this forever, as is witnessed by the headline for this piece, which is a line from poet Vern Eaker’s work,  Eyes are the Windows to the Soul.

Case in point: we all know the role eyes and eye contact play in becoming emotionally connected to another person,  perhaps to the point of falling in love.  Can you not think of the moment(s) you met someone and found yourself locked into a deep gaze that seemed to last much longer than the few seconds it actually did?

Such moments may be the ultimate example of the power nonverbal communication wields. No words needed, thanks. The eyes have it.

Another way of detecting the power of the eyes is to ask ourselves why we find a portrait or closeup photo of a total stranger so magnetic.  The answer may well lie in the eyes.

The most vivid example of that, for me anyway, came when I saw the cover of the June 1985 edition of National Geographic. You probably recognize it as the featured photo above this essay. And, like me, you probably know how hard it’s been to get that image of 12-year-old Sharbat Gula out of your head. Even if you wanted to.

And, of course, the reason is the eyes. They draw us in and insist that we spend some time thinking about this enigmatic and beautiful young woman trying to survive by fleeing the bloody war zone between Afghanistan and Russia.

The eyes may be a window to the soul, but we view them through the prism of our own eyes, where we see what is most subjectively recognizable to us individually. Making things even more complex is that my eyes may reflect different emotions to different people because I’m not equally engaged emotionally with all of them.

So, beyond the physical appearance of Sharbat Gula (whose identity was unknown to all including the photographer then), we may see different things. This “Afghan Girl,” as she was known, may be courageous; she may be lost; she may be determined; she may be strong. Most would probably find a determination in those eyes. Or, of course, she may be all of these and more.

For example, Sharbat reportedly told a journalist later that she was indeed afraid when the 1985 photo was taken, but her fear was of having her picture taken in the first place. Muslim women do not generally allow their pictures to be taken unless they are fully covered. She said she ran from the room right after McCurry snapped her photo.

The rest of the story

You may know the rest of the story about Sharbat and National Geographic. McCurry was touring an Afghan refugee camp in Pakistan, shooting hundreds of pictures of those in the camp. One was a young girl whose name he didn’t know and never would for many years, and he wasn’t even aware of how striking she was until he was reviewing his day’s photos later.

Sharbat’s identity remained a mystery, until so many readers wrote in asking about her and wanting to help her over the years, that the magazine sent McCurry back to the region in 2002 to try and find the now-grown woman, learn her story, and shoot another photo of her.

Once again, it’s the eyes

Establishing the true identity of the woman from many counterfeit posers who presented themselves as Sharbat to McCurry, presented a challenge. Iris recognition software was used to scan the eyes to prove this 29-year-old woman was the true Sharbat Gula. 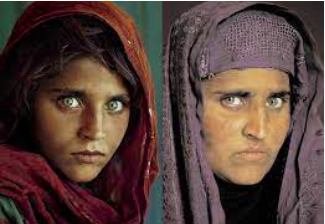 At that point, Curry took a second photo, and National Geographic ran the two photos side by side in its April, 2002 issue.

Today, as a result of the 1985  “Afghan Girl” photo and of the discovery of who she is, an international outpouring of support for her arose.

She stayed in Pakistan, married, and raised a family until 2017 when she and her children were deported back to Afghanistan because they possessed forged identity documents.

She was given a large home in Kabul by President Hamid Karzai, plus a monthly stipend to live on, and “The Afghan Girl” became a high-profile figure. But when the Taliban took control of Kabul in 2021, Gula’s life was threatened, so she and her children were granted refugee status by Italy and were evacuated safely there.

The Image and the Eyes

As a journalist, I have long known how powerful a single photograph can be, and I’ve reminded my students of that over the years. The editors of National Geographic have chosen “The Afghan Girl” as one of the magazine’s top 5 cover photos, out of some 1,500 cover photos it has published in its long history that dates back to September 12, 1888.

As for Sharbat Gula, she would have had a much different and much more austere life were it not for that single cover photo.

And, quite possibly, because of the eyes peering out of that photo to millions of compassionate readers..

19 Responses to “To see into another’s heart, Eyes are the place to start”