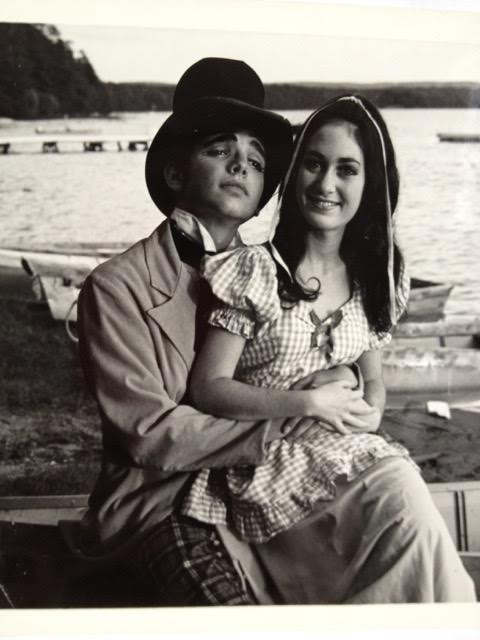 Behind Kresge before The Sorcerer, sitting at the edge of Lake Wabakanetta

The moon has a spell-binding hold on our collective imagination and never more-so than the summer of 1969.

That summer was my sixth and last summer as a camper at the National Music Camp (now Interlochen Arts Camp) in Interlochen, MI, the granddaddy of fine arts camps, set in a pine forest between two lakes in northern Michigan. All the girls divisions, as well as most of the main performances buildings at the time were set on Lake Wabakanetta, including Kresge, where the Gilbert & Sullivan operetta was performed, and Grunow, where the High School division put on its plays.

I had a good summer, portraying the glamorous actress, Irene Livingston in Moss Hart’s Light Up the Sky, a role originated by his wife, Kitty Carlisle, a fact I got to tell her years later. 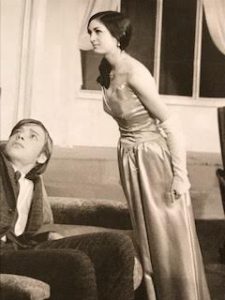 I was also Hermia in A Midsummer Night’s Dream. We performed The Sorcerer in Operetta and, though always in the chorus, I was given a small part in the opening pantomime during the overture. In the Featured photo, I and my partner, David Maier, are in costume just before the start of the show. For the third time, I won the Chorus Award for Best Chorus Member; a record, I believe.

There was one moon-drenched night that I will never forget. It was July 20, and anyone alive will always remember where she was when man first walked on the moon.

Camp was quite regimented. We wore uniforms, awoke to Reveille and went to bed by Taps. But this night, High School Girls were allowed to stay up late. A small black and white TV was brought in to the Sun Decker, a three story structure, long-gone, but at the time, a concrete haven for fun. It had indoor space for boat storage, ping pong, fireplaces for cook-outs on rainy nights, and decks outside to sunbathe on, recessed into the side of the hill sloping down to the lake and we, the last of the naïve generation who didn’t know the dangers of skin cancer, would douse ourselves in baby oil and lie out to soak up the rays when we could. It was inside, on the second level where we camped out on this particular night, packed in like sardines as we watched the scratchy image on the old TV.

My heart raced as the door of the space capsule opened and Neil Armstrong stepped out. I climbed over the bodies of the other girls and walked out to the edge of the railing around the concrete deck. I turned my back to the TV and looked out at the moon, reflected perfectly in the quiet lake below, gorgeous twin images of reflected light. Behind me, as in a dream, I heard Neil Armstrong’s voice:  “One small step for man, one giant leap for Mankind,”

He spoke to me from that glowing disk I gazed at in the sky. How marvelous! How unthinkable. In an era of drug-induced hallucinations, my real experience far surpassed anything that could have been imagined. One of my countrymen really had landed on the moon; I had just witnessed it with my own eyes. And there stood 16 year old Betsy, looking out at Wabakanetta, this beautiful lake I had so enjoyed in my many years at camp. There was the reflection of the moon. But on this particular night, an American stood on the very real surface of that moon, which itself can only reflect light; twin reflections, far away, yet only as far as a pebble’s throw.