Movies That Made a Difference by Betsy Pfau
200
(323 Stories)

Prompted By What We Watched
6 comments. 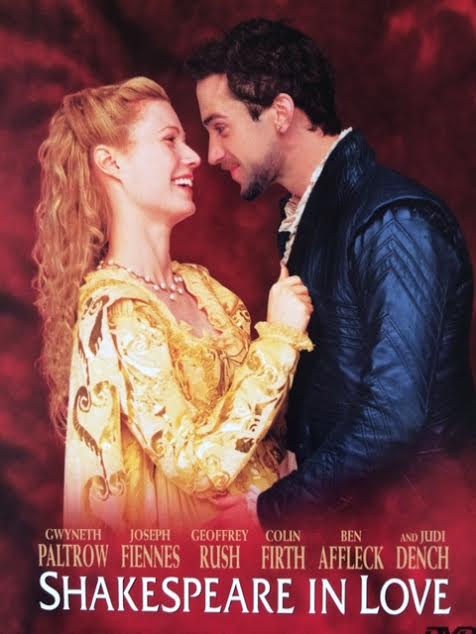 I tend to love romantic movies; big sweeping costume dramas, though occasionally go for thoughtful dramas. It is difficult for me to pick just five that have rocked my world, as I love to come back to favorites and watch them over and over again, just for pure pleasure. So I will share my top five and then add a few honorable mentions.

Favorite all-time movie. Saw it 15 times in the theater. It became migraine therapy when I had a headache (which was frequent in those days) and I couldn’t take any more medication that day. It is absolutely the perfect film, combining romance, witty dialogue, the supposed genesis of “Romeo & Juliet” (my favorite piece of literature in the English language, and oft-used source for monologues in acting and speech classes in college…it was a sad day when I realized I was too old to play Juliet), gorgeous costumes and music. The source of continued battles in my household over the relative merits of this film vs. “Saving Private Ryan”, since it beat the latter for Best Picture Oscar. I watched it again last summer and found it as wonderful as ever. And it takes place during the time of Elizabeth I, my favorite period in history. What could be better?

This took me by storm and continues to cause turmoil. Best movie kiss of all time. “Stay alive…I will find you!” Be still, my beating heart. Who knew that Daniel Day-Lewis had it in him. This movie hit me at a peculiar moment in my life. I was just turning 40, and saw it over Thanksgiving weekend, always around the time of my father’s birthday; he had just died two years earlier. I became obsessed with the movie and Daniel Day-Lewis, saw it 7 times in the theater, watched it the second it was released to video, my husband (almost as a joke) presented me with a laser disk of the movie for Chanukkah that year, (“That’s nice dear, we don’t have a player…oh you bought a player too!”) We wound up owning seven movies in that format. TOO early adopters.

As an acting major myself, I was fascinated by what DD-L did, how he transformed and I watched all his early work (I had only seen “My Left Foot”, brilliant, but didn’t cause heart palpitations). I spent hours in the library (this was pre-Internet), reading up on him. I decided I had to meet him and did (another essay, already written and quite long; I will post some other day). It took years before I came to see all the father themes in the movie and how I responded to them at that period. The movie still speaks to me. And Day-Lewis is, arguably, the finest actor working today, though even he had some clunkers at the beginning of his career. There was a straight-to-video number called “Eversmile, NJ”. AWFUL!

I read the book in 8th grade. I honestly don’t remember the first time I saw the movie, as it is now a home-viewing fixture. Quiet intensity, raw power. Though I grew up in integrated Detroit (not moving to the lily-white suburbs until nearly 11 years old), I had never encountered racism or rural poverty like this. And I looked so much like Scout at that age. Gregory Peck quickly became a favorite actor of all-time. I even own a self-portrait cartoon he drew, purchased at a charity auction. I wanted to be Scout and curl up in the protection of his arms.

The Americanization of Emily, 1964

Julie Andrews, James Garner, black and white, cynical WWII movie.  Brilliant use of Mary Poppins against-type in this anti-war love story written by Paddy Chayefsky. James Garner (long before Rockford) always reminded me of my dad, which didn’t hurt. This particular movie had him playing an irresistible cad who Julie Andrews falls for against her will, having already lost her husband, father and brother to the war effort. She doesn’t want to fall for another man in uniform and refuses to glorify the war. It takes place around the D-Day invasion and the search for heroes. Bracing. I don’t get to see it often enough.

Just about anything with Audrey Hepburn in it…here are my favorites::

-Roman Holiday, 1953 Black and white…Princess Anne escapes the strictures of the palace and falls for journalist Gregory Peck (see above), but gives up love for duty. Filmed in Rome, so locations to die for.

-Two for the Road, 1967 Bittersweet road trip in France with Albert Finney as boyfriend, then husband, filmed non-sequentially (which was radical at the time). Shows them as poor college students and successful adults, young marrieds, parents, cheating spouses…runs the gamut. Great cars and locations, true and difficult emotions. And Finney winds up with Hepburn instead of Jacquline Bissett! Some funny scenes, some with great pathos.

-How to Steal a Million, 1966 A comic trifle co-starring Peter O’Toole, great outfits by Givenchy, in the heart of Paris. About a wealthy family with art forgers at its heart, but stead-fast Audrey must find a way to clear the family name and enlists O’Toole’s help, thinking he’s an art thief. Of course they become romantically entangled and comedy ensues. I do watch this over and over and never tire of it.

For someone who likes sweeping, romantic sagas, this is the biggest of them all. I read the book in 8th grade. Though I would never compare myself to Vivien Leigh, with my green eyes, pale skin, black hair and a 20″ waist, I did think I bore a passing resemblance to Scarlet, of the printed word. Clark Gable never did it for me as Rhett Butler, but those are little quibbles with this magnificent film. And the film proved to be a bonding experience with my mother, who saw it when it was first released and took me to see it when it was re-released. She had a second edition copy of the novel, a birthday gift from her brother, which is now mine.

I know everyone loves the Colin Firth version, but I loved the Keira Knightly recent edition and watch it over and over again. I find it literate and charming, though Matthew Macfadyen was a bit gloomy. The rest of the cast was just perfect and I loved the way it was filmed.

Directed by Franco Zeffirelli who cast gorgeous unknown British youngsters as the leads, I bought the album and listened to it ad nauseam. I could probably recite whole parts of it right now. Liberally edited (including cutting my favorite monologues) it still flows and makes sense. The leads wound up doing print ads for Yardley cosmetics. I still have those ads. It is considered the best Shakespeare ever put on film. I didn’t know, but learned while reading up on it for this essay that Lawrence Olivier (uncredited) spoke the opening and closing monologues. Very classy.

6 Responses to Movies That Made a Difference