Second semester, senior year in high school. I walked into the first day of my last Social Studies class to be greeted by Norman Bienstock, a brand new teacher. This was his first job. He seated us according to a seating chart and called out our names, to put them with our faces and begin to learn his new students. “Elizabeth Sarason?” “Betsy”, I replied. He peered closely at me. “Are you any relation to Robert Sarason?” “Yes, he’s my cousin.” The color drained from his face.

My cousin Robert, son of one of my dad’s brothers, is seven years my senior and was a wild kid growing up. I only saw him at big family get-togethers, but he was constantly in motion; the kind of kid who would tease his younger cousins, or try to pull up the skirt of the little girls for a quick peek. He rode a motorcycle, wanted to be a vet, but couldn’t get through college. He wound up as the head of HAZMAT at UC Davis, quite a responsible position. In adulthood, I’ve found that Robert cares a lot about family and has a soft spot for all of us, but I didn’t know that then. He seemed like something out of Rebel Without a Cause.

Mr. Bienstock explained he had been friends and “running buddies” with my cousin. I looked at this mild-mannered guy and that seemed improbable. He might have worried that I had my cousin’s wild temperament; he couldn’t have been more wrong. I was the valedictorian of the class, into music, theater, a real goodie-goodie, as he quickly learned. He could count on me for decorum and discipline. We got along fine.

Until March, 1970. My Uncle Roy, Robert’s father, passed away rather suddenly after a short struggle with pancreatic cancer. He was the first of the eight Sarasons to pass and the family was heartbroken. Robert came in from California for the funeral. It was the first time I’d seen him in years. That night, at shiva I spoke with Robert. (Shiva means “seven”, as we traditionally observe seven days of mourning after the funeral, though that is no longer strictly observed. But it is a time when the community cares for the berieved family, so they can grieve and not have to tend to daily needs. We all come together and express our grief communally.) I told him that his old pal Norman Bienstock was my Social Studies teacher.

His face lit up. “When you see him tomorrow, ask him about Rozelle”. “Who was that”, I queried? “Never mind, just ask him.”

So I went to class the next day, raised my hand, waited to be called on and said, “Mr. Bienstock, who was Rozelle?” He stared at me for moment, as if in a trance. His face turned a thousand shades of red. He refused to answer. I didn’t seek to embarrass him, but I told him my uncle had died and Robert was in town. I, again, put forth the question. He looked uncomfortable. I am not normally a smart ass, but now others in the class took up the question and started chanting, “Ro-zelle, Ro-zelle!” He was trapped. He collected his thoughts for a moment, trying to be delicate. Finally, he said, “Let’s just say, nothing that a shot a penicillin couldn’t cure.”

Naïve as I was, it took me a moment to process this. Rozelle was a pro who had given my cousin and his buddies a venereal disease! So Robert had deliberately sent me on a mission to embarrass his old buddy. And I succeeded. I felt pretty small and was sorry I had put Mr. Bienstock in that position. He seemed to get over it and quickly moved on to that day’s lesson. Perhaps this gave him a certain amount of “street cred” with the tougher element in class.

Norman showed up at shiva that night. He and Robert embraced like the old friends they were. He told Robert about the day’s embarrassment. Robert had a good laugh, as this was the desired effect. But all was quickly forgiven and forgotten and I saw the two of them in action (though it was still difficult to imagine this mild-mannered teacher running with my wild cousin). I was relieved that my part in the scheme was forgiven as well.

Robert went out of his way to see me when I came to Northern California, and even came east for David’s bar mitzvah in 1998, pictured here at my house, the following day. He sent comforting words when our oldest first cousin, who we all thought was immortal, passed away, many years ago now. 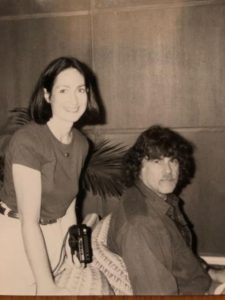 I did not stay in touch with Mr. Bienstock, but came across the Featured photo on my high school Facebook page a short time ago. The person who posted it said it is three years old and he was 70 in the photo. Norman is now retired. She commented that he was her favorite teacher and lots of other students chimed in about him as well. Evidently, he grew into a compassionate, caring teacher. Happy to find my momentary lapse in judgement had no lasting effect.