Prompted By What My Father Told Me
15 comments. 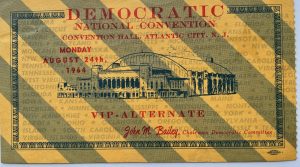 Although my mother had been brought up in an orthodox Jewish home, my Dad was never even a bar mitzvah. His religion was the Democratic Party, FDR was God and  he considered election day his holy day of obligation.

My Father's Religion was the Democratic Party

I remember my father hunched over the round end table in the living room of our small Bronx apartment, sharpened pencil in hand. It is  the presidential election in 1948 and he is busy creating  a well ordered  list of the states with boxes for each of their  electoral votes.   Before the magic of instant computer calculations on television,  my father would manually  tally the electoral votes while listening to  the returns on the radio. This is my earliest memory of him. My  father, usually laid back and undemonstrative,  acted almost giddy the next morning with the news  that Truman had won re-election.

Our family dinner conversations were generously sprinkled with his take on current events and politics, and I witnessed debates with his extended family that bordered on great theatre. My father was very anti-communist, but his  brother-in-law, my Uncle Grisha, was a card carrying Communist . (Dad saw the success of the New Deal as the answer to socialism).  In the throws of a disagreement,  my uncle and my father would  leap out of their chairs  with Grisha screaming “You just don’t understand Stalin and the Soviets”, with my  Dad yelling back,  “I understood  Stalin the minute  he signed a pact with Hitler!” The decibel level was high, with my mother trying to calm things down by reminding everyone of “the neighbors”.  As a child I  never really understood exactly what they were yelling about, but  this frenzy never frightened me. I learned that politics was a passionate and exciting game,  and it was one of the few times I  saw  my father animated about something. (My mother, by contrast,  kept silent during these debates, other then to try to shut everyone up.  I knew she voted every year, but  I never once heard her utter a political opinion.)

Some of mother’s relatives were eager political commentators as well.  The family had started a cousins club where there would usually  be a meeting about  the purchase of cemetery plots in New Jersey. It was stupefying,  but there was often a vigorous political conversation over coffee and cake. Here cousin Leon, also a Communist, would do battle with Dad and my Aunt Rosalind, who was a  Jewish  outlier – a Republican!   Political oil and water, but I loved the rousing debates.

I never participated in any of these discussions. I just listened and took it all in.  But I was fascinated and drawn to the excitement of a political duel.

I got to witness full political  spectacle in full technicolor when I became a “Johnson Girl” at the 1964 Democratic National  Convention in Atlantic City. It was a political junkie’s  dream.   I rubbed shoulders with Robert Kennedy and Hubert Humphrey. And I stood just  a few feet away from  Martin Luther King, Jr. during a spontaneous interview  with him by a small group of reporters about the controversial issue of seating delegates from Mississippi.  I was a star-struck groupie.  An Adlai Stevenson sighting in a restaurant definitely trumped a view of super stars Paul Newman and Barbra Streisand who appeared at a youth rally.

The most thrilling event occurred  the night of President Johnson’s acceptance address. The “Johnson Girls” were randomly directed  to seat the delegates and I was assigned  to the New York delegation which had front row  seats right under the main podium.  I ushered in the most important  Democrats in New York State.   And because of my father, I knew all about most  of them.   I directed   “Boss” James Farley, the aristocratic Averell  Harriman, congressmen and  state senators to their seats. I knew them like a baseball fan knows his statistics: who’s in a slump and who’s on a streak, who’s up and coming and who’s headed to retirement.  And President Johnson was  less than 30 feet away!  All I could think about was how excited my Dad would be knowing that I was rubbing shoulders with his heroes. I couldn’t wait to get home and tell him.

I expected to go over all of the details with him  about  this amazing week, but I have no memory of any post convention discussion.  Because  when I arrived home, my parents  told me the news that my  beloved Uncle Jack,  who had been sick for a long time, had died while I was away.  My mother and my father had kept the news from me, not wanting to ruin what they knew was such a special time. I expressed annoyance  at first for not being told, but secretly I was glad they had waited to tell me the bad news.

My Dad died many years ago, the last decade of his life in an Alzheimer’s haze.  I don’t think as much about him any more, but when I’m watching television during  political conventions, hearing political debates or  speeches, and especially when the votes are being tallied, I feel the excitement that he experienced and passed on. It was his legacy to me.

15 Responses to My Father’s Legacy