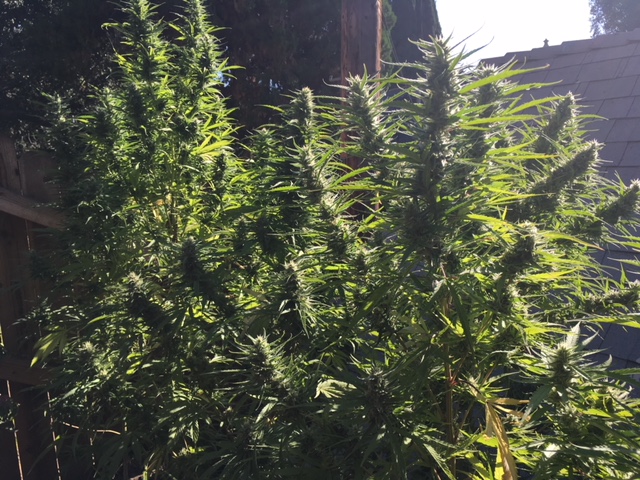 I have a friend who grows his own marijuana. He lives in an old but well-kept house nestled in the hills of a large American city. He grows his marijuana on a fenced-in corridor behind an A-frame studio. Trees border the hillside keeping the sun off the slope until mid-morning. As the afternoon progresses, the sun follows an arc perpendicular to the single row of weed seedlings before it disappears over the studio’s roof line. The location is banal, typical of  backyards in a neighborhood that is civilized but not extravagant. The landscape seems Mediterranean with its white stucco buildings and terracotta roofs, all surrounded by palm and cypress trees, blazing bougainvillea and the ubiquitous ficus.

Season after season, he perfects his crop amidst civilization's sturm und drang.

My friend calls his garden the Ho Chi Minh trail because, like its Vietnamese prototype, the marijuana and its camouflage— bamboo and  bougainvillea — is potted and portable. The plants are constantly in flux as they grow taller and require protection from different angles and positions. Over weeks and months, the marijuana and its potted floral camouflage dance in stop action, courtly, facing, circling, and bowing to one another. 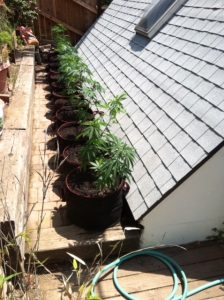 My friend has never been discovered, even after decades of guests, gardeners, and meter readers, the plants maturing from yellow to dark green beneath the thudding blades of cop ‘copters. “I keep the place mundane,” my friend told me. “So as not to attract attention.”

In contrast to its mundane surroundings — the middle-class homes, the winding streets, the city spread around him — my friend’s marijuana yields a bounty of exotic, and powerful buds. Grown from carefully pedigreed seeds, marijuana strains pass on an ancient dichotomy between indica and sativa. Eighteenth-century botanists first noticed this indica v sativa dyad when hemp competed with cotton as an alternate material good for fabricating rope, ship sails, paper, and clothing.

Indica strains probably developed in the Himalayan ecosystems of Afghanistan. They produce sticky, powerful resins as a protection against a high-altitude climate. Indicas elicit dreamy, mellowing effects from their passengers. When you smoke an indica strain you feel “stoned” in the classic sense, a few beats behind the action, your whole body feeling happy, hungry, or sleepy. As a medicine, indicas can stimulate hunger and nurse away anxiety, insomnia, muscle pain, and more.

Sativas differ from indicas because they developed in opposite environments, the equatorial forests of South America and Southeast Asia for example. Sativas are more cerebral. They can turn you on, speed you up, give you bursts of energy. You might want to talk or go somewhere to trip on reality, like out in the world. Sativas make good medicine to deal with depression, attention-deficit disorder, and fatigue. My friend knows them all and could describe them in greater detail than I. 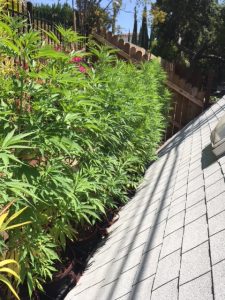 My friend’s farming methodology has changed over the 20-plus years he has cultivated his hillside garden. He began by keeping seeds from a great batch of Humboldt weed that his friends grew above a river that ran into the Pacific on a black-sand beach below. In the spring, at the equinox, he let the seeds sprout in a womb of water for two days, then carefully lowered the fragile plants into gardening soil. The yield was low, but by July, he already had a row of exuberant plants growing in the sun behind his studio. He had already found his spot.

He learned how to sex the plants. Males were immediately murdered without mercy. The boys produced pathetically low cannabis content and no buds; their leaves would give you a sore throat before they got you high. And the exuberant young males spread their pollen everywhere, impregnating their female companions and thereby distracting them from blooming.

“It’s harsh,” my friend told me. “But by killing the males, we push the females to blossom into fragrant buds imbued with their own ecstasy. Which would you choose? Generating resinous glory or producing seeds for the next cannabis generation? Regardless, if the males were to survive, they would burden the remaining females with reproductive responsibility. Sexual harassment lurks even in botanical realms.”

In the beginning, my friend closely guards the seedling shoots. Within two days, the sprouts poke through the dark soil to greet the sun. After hibernating in a tiny peat cup filled with warm potting soil, each root triumphantly thrusts the two halves of its seed shells aloft until the now-vestigial seed wombs dry up and blow away. After a week, my friend would fill 12 or 15 five-gallon plastic pots with soil, a rich blend of composted humus, peat moss, Pacific fish emulsion, crab meal, shrimp meal, worm castings, sandy loam, perlite, bat guano, granite dust, kelp, and oyster shell (for pH adjustment). Recently, he graduated to sturdy cloth baskets, each holding 25 gallons of special soil. Now, he waters his ‘babies’ with a tea he steeps in a bright blue plastic container with an air pump that bubbles oxygen into the brew. 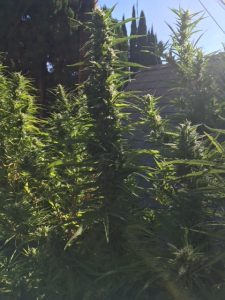 Four weeks after planting, he admires the beautiful yellow-green cannabi reaching upward toward the sun in a universe of rich dark loam. He also learned to put no more than three plants in each planter bucket. Yes, there is often attrition and the boys will be murdered but — according to my friend, “weed behaves according to the fundamentals of botany. Space serves as a constant; the plants will consume whatever air, light, and water available in a given space. A single, mature plant can yield more than three plants occupying the same space.”

And so it goes; the great green beauties grow to form their own Ho Chi Minh canopy of foliage. The grasshoppers who first appeared as diaphanous, light-green babies grow and harden, their legs and bodies turn dark green, then brown. Of course they stay. They live their whole lives fat, protected, and stoned. Harvesting begins with a few outrigger blossoms. After an afternoon of drying in the sun, these buds can be smoked. With the resin forming crystals on the myriad of tiny leaves, this early pot can be mind-numbingly powerful, a promise of highs to come. The rest of the crop comes down plant by plant.  By the time of harvest, my friend has manicured the plants, immaculately stripping away vestigial leaves, atrophied buds, manicuring the buds on branches while they’re still in the ground. When cut, the branches a sequestered in a dark garage with a humidifier and gauges to ensure their potency. 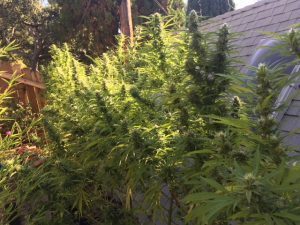 Today, we all celebrate. January 1, 2018 signaled the end of weed paranoia for generations of pot heads. And my friend? Season after season, he perfects his crop amidst civilization’s sturm und drang.

8 Responses to My friend