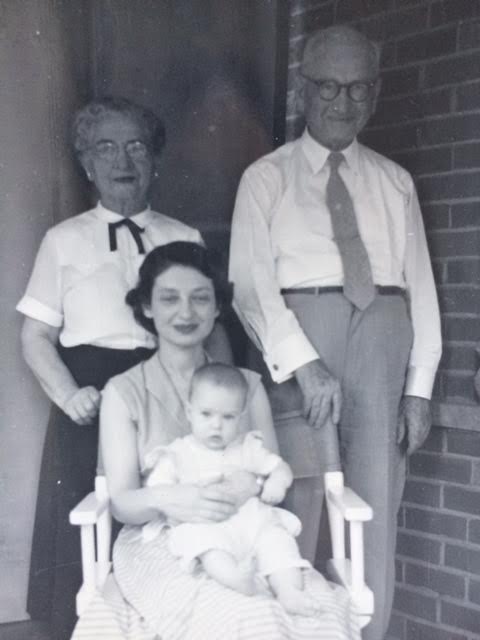 Belle Potocsky and Zalman Beckenstein were married in the “old country”; Bialystock, Lithuania in 1902. I have a dress that Grandma wore to a ball when they were courting. These were not “shtetl” Jews like in “Fiddler on the Roof”. They were educated and erudite. My grandmother’s dress is a beauty, with a train and a loop to pick up for dancing, a velvet opera jacket, whale bone stays and fancy lace up the high collar of the separate top. Here is a photo taken 45 years ago of me modeling it. I have since had the ensemble restored and packed away in acid-free tissue. Someday, I plan to give it to a museum of Jewish heritage. 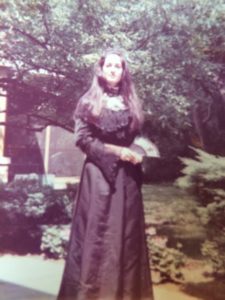 A doctor I admire tells me that Bialystock was the intellectual capital of the diaspora. I had never known that. My grandfather was prosperous. He worked for a watchmaker, buying and selling jewelry, went on buying trips to Warsaw. My grandmother had a maid. Two children came along quickly, Anna and Joseph, one dark-haired like Grandma, the other with copper hair, very fair. Grandpa was blonde and blue-eyed. 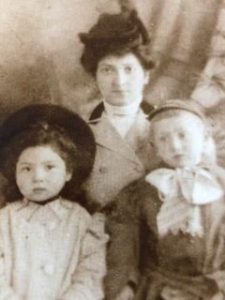 Belle with her first two children, before leaving Russian, around 1905.

They were friendly with everyone in their community, which saved them when the pogroms swept through in June, 1906, killing all the Jews they could find. As the pogrom began, my grandfather ran home through back alleys to escape the gunfire and the family was hidden by their Christian landlords. 2,000 Jews were burned alive when their synagogue was set on fire. Belle and Zalman quickly booked passage to America’s golden shores and arrived in New York in August, 1906. My mother always told me proudly that they came second class, not steerage. A friend of my brother’s found the manifest for the ship.

Some years ago, a cousin visited Bialystock and tells me there are no Jews remaining, only two plaques, one in a park where Jews were gunned down, one where the burned synagogue stood. All other traces of a once-thriving community have been wiped out.

Since Grandma’s parents were already there, they made their way to Toledo, Ohio, and shared a two-flat with them. The homes were connected through the basement. Zalman, now known as Samuel Stein (he dropped the “Becken”; Grandma’s family became “Perlis”, after a sister married a man with that name) opened a jewelry store on Adams St. in downtown Toledo, a store that prospered and provided a living for himself and his son, Joe, who joined the business as an adult.

Two more daughters were born once the family was settled in Toledo; blonde Stella and my mother, Connie, who was fair, but with dark hair. I often felt that the four children were a perfect display of Gregor Mendel’s genetics code. 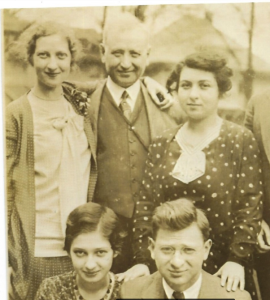 The four Stein siblings with their father in the early 1930s

The featured photo shows 6 month old me, sitting on my mother’s lap, flanked by her parents in our Detroit backyard, summer of 1953.

Grandma was the oldest of 9 children, all of whom came to live in the US, most in Detroit. Two of her siblings married cousins of Grandpa’s, so there were several double cousins in the family. They included professional people, a doctor, a lawyer, one played clarinet and taught my mother about the instruments in the orchestra. He played in the Marine band that was on the ship that brought Woodrow Wilson to Paris to sign the peace treaty that ended World War I. He brought my mother back a doll from France that I now own.

Grandpa had two brothers who came to the US (one also shortened his name to Stein, the other to Beck), one who moved to South America and lost touch with the family. He had two sisters who stayed behind in the old country. After the first World War, that part of Russia became Poland. That whole branch of the family perished in the Holocaust except for one daughter, Paula. She married a Zionist and they fled overland, arriving in Palestine in 1939. My grandfather was in touch with them for a while, but eventually lost touch. We didn’t even know her maiden name, much less her married name.

My brother spent two years in Israel as he studied to become a rabbi. There are amazing networks to find people displaced by the Holocaust and my brother set about to find our cousin, with very little information. But the first person he asked happened to know someone from his army days who had come from Bialystock. His name was Yaacov Nishri. It was Paula’s husband. My brother found her! She was over-joyed to find the son of a first cousin.

My brother took me there when I visited in 1972. It was unbearably hot and I had my long hair braided and twisted across my head. When Paula opened her apartment door, she startled. She said I looked like her sister Eshkie, murdered by the Nazis. Family ties run deep. I stayed with her and her family for a week. She and Yaacov spoke no English. They just fed me and fussed over me. Her daughter Hannah, just out of the army, spoke excellent English and we became friends, though we also lost touch as the years wore on.

My grandfather loved this country and all it had to offer, but he understood its limitations. He knew that Jews were still disliked and couldn’t hold certain jobs. My mother wanted to be a librarian (in the mid 1930s) but was told this was not a profession open to Jewish women. She became the book keeper in her father’s store. My grandmother was terrified of dogs her whole life, as the Tzar’s army had turned them loose on the Jews during the pogroms. Some things one just couldn’t get over.

My grandfather died in 1964, but I’ve thought of him at several moments throughout my life. As I stood at the Wailing Wall (what remains of the Second Temple) in Jerusalem in 1972, I thought how he would have loved to pray there, and to know that his youngest grandson would soon be a rabbi (and become a well-respected Talmudic scholar). I think of my grandfather every time I vote, grateful for our freedom to exercise our civic voice.

I am terribly worried now, thinking that my family survived pogroms and the Holocaust, the most horrific biased expressions of hatred against Jewish people the world has seen. Antisemitism is on the rise. The current administration finds it convenient to fan its flames and feign ignorance. It is intolerable, yet it is tolerated.

I recently returned from the beaches of Normandy where the US is still viewed as a liberating force for good. But at the Caen Memorial Museum, an excellent exhibit covered the end of World War I, the Weimar era, the rise of fascism and the Nazi era. It brought echoes that sound all too familiar today. Santayana warned those who do not study history are doomed to repeat it. Let us learn rather than repeat. We don’t need strong men, falsely promising that they, alone, can solve the ills of society with bluster and false promises while fanning the flames of fear of “the other”, slowly stripping away our civil liberties in the name of “safety” and muzzling the free press. That is how Mussolini and Hitler came to power. My grandparents flourished in this country, as did many of our forebears. This can be a great country, if we remember who we are and where we all came from. As we celebrate another 4th of July, let us truly strive to be the land of the free that the authors of the Declaration of Independence envisioned.

10 Responses to My Grandparents’ Story

My First Test
by Lutz Braum