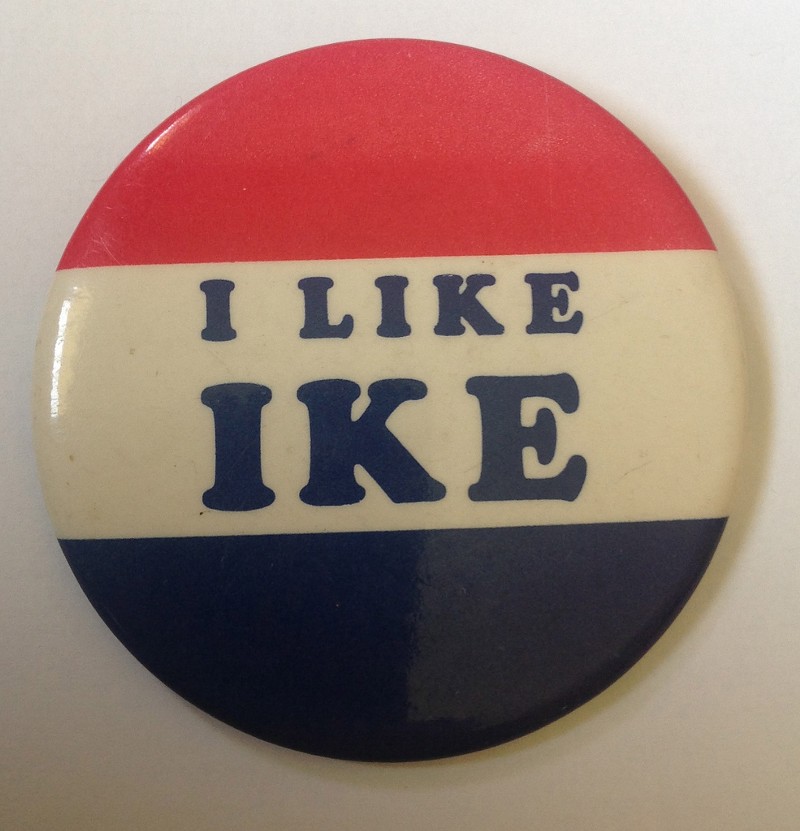 Despite my parents’ indoctrination, I still kind of like Ike.

In 1952, I was starting second grade in a new school and wanted what all of the other kids had, an “I Like Ike” pin. My parents said no way. I could get one for Adlai Stevenson if I wanted. I didn’t. Being the new kid on the block, I wanted the popular pin.

Actually, even as a lifelong Democrat (my parents indoctrinated me well), I kind of still like Ike.

My parents’ explanation about this was short and simple. Stevenson was a Democrat and a smart one at that. They were loyal FDR Democrats and Republicans were the bad guys. If all the other kids at my new school wanted to jump off a cliff, would I follow? I was just seven, so maybe. But I wish they had explained why they loved Stevenson other than his party affiliation.

Actually, even as a lifelong Democrat (my parents indoctrinated me well), I kind of still like Ike. The worst thing about him was his choice of Richard Nixon for his Vice President, especially since his heart issues made a Nixon presidency possible. I never imagined Tricky Dick, who told us we would never have to kick him around anymore, would rise like the phoenix to become president in 1968. But that’s another story.

Back to Ike. He was a genuine WWII hero who moved up the army ranks to become supreme commander of our forces in Europe. Eisenhower returned home in 1945 and went on to serve as chief of staff of the U.S. Army. Then he ran for president and won twice. And he had that cool pin I coveted.

I hadn’t thought much about why, despite my parents’ indoctrination, I still kind of liked Ike until my cousin emailed me a story that made me see him in a different light. She shared that when Eisenhower entered the Nazi death camps at the end of the war, he ordered many photographs to be taken. According to the email, he insisted that all of the horror be filmed and witnessed so no one could claim down the road of history that this never happened. That’s one pretty good reason to respect him.

The email got me thinking about the 1952 presidential election, the one in which I coveted that pin. We had the Cold War and McCarthyism going on, along with the Korean War and a recession. Not so much happy days. I remember ducking under my desk with my hands over my head for atomic bomb drills. Who was going to keep my safer, a war hero or an intellectual with holes in the soles of his shoes?

Because of unhappiness over the Korean War and the recession, Truman decided not to run and the Democrats nominated my parents’ favorite son, Adlai Stevenson. Ike beat him in a landslide with 442 electoral votes to only 89 for Stevenson. Interestingly, Stevenson won the following states: West Virginia, Kentucky, Arkansas, Louisiana, Mississippi, Alabama, Georgia, South Carolina, and North Carolina. Think about that. And by the way, 45, that is a landslide.

Four years later, I was in sixth grade and not terribly interested in the 1956 rematch election beyond having developed an even greater dislike for Nixon. Stevenson almost chose JFK as his running mate, but decided to go with Estes Kefauver instead. This was probably a good thing for Kennedy, as the landslide was even bigger than 1952. The Korean War was over, the economy was improving, and I let go of my need for the “I Like Ike” pin.

Mostly, I remember the rap on Ike was he golfed too much and didn’t work that hard. Sounds familiar, but I couldn’t tell you if that was fake news. My mind was on other things back then. So I decided to learn more about President Eisenhower and Adlai Stevenson to see if my parents were wrong to deprive me of that pin.

Stevenson was intelligent, witty, knowledgeable about foreign affairs, and a great speaker. Still, there is a good argument to be made that Ike’s politics were more similar to Stevenson’s than the Republicans backing Joe McCarthy then. I think Eisenhower was the kind of Republican I could respect today. I remember those years as being politically boring. Boy, wouldn’t that be refreshing?

While he didn’t do much to advance civil rights, Eisenhower strengthened Social Security, built the new Interstate Highway System (a massive jobs program), and worked behind the scenes to end anti-Communist Senator Joseph McCarthy’s reign of terror.

He also continued FDR’s New Deal and Truman’s Fair Deal programs, increased the minimum wage, and created the Department of Health, Education and Welfare. Despite his hands-off attitude toward ending school segregation, Ike did send federal troops to Little Rock, Arkansas in 1957 to enforce integration of a high school there. He also signed civil rights legislation in 1957 and 1960 that provided federal protection for African American voters.

Over eight years, his military intervention in other countries was minimal. Eisenhower even worked to strengthen NATO and created the Southeast Asia Treaty Organization (SEATO). Despite being a general, Eisenhower had a realistic notion of the limits and bad consequences of brute military force. At the Potsdam Conference in 1945, he argued against dropping the atomic bomb on Hiroshima and Nagasaki, fearing using such a terrible weapon would damage America’s prestige and certain that Japan was about to surrender.

In a 1953 address to the American Society of Newspaper Editors (yes, he respected journalists) he said,

“Every gun that is made, every warship launched, every rocket fired signifies, in the final sense, a theft from those who hunger and are not fed, those who are cold and are not clothed. This world in arms is not spending money alone. It is spending the sweat of its laborers, the genius of its scientists, the hopes of its children. The cost of one modern heavy bomber is this: a modern brick school in more than 30 cities. It is two electric power plants, each serving a town of 60,000 population. It is two fine, fully equipped hospitals. It is some 50 miles of concrete highway. We pay for a single fighter plane with a half million bushels of wheat. We pay for a single destroyer with new homes that could have housed more than 8,000 people.”

He also had great empathy for those suffering from hunger throughout the world. In 1958, he spoke of people who “see suffering in the eyes of their children. Many despair that their labor will ever decently shelter their families or protect them against disease.” Eisenhower recognized that when people lose hope, peace and freedom suffer along with them. He said, “For wherever free men lose hope of progress, liberty will be weakened and the seeds of conflict will be sown.”

Ike was also a believer in the importance of protecting the environment, a surprising contrast to what many Republicans tell us today:

“As we peer into society’s future, we — you and I, and our government — must avoid the impulse to live only for today, plundering, for our own ease and convenience, the precious resources of tomorrow. We cannot mortgage the material assets of our grandchildren without asking the loss also of their political and spiritual heritage.”

In the 1950s, Eisenhower was something that is rare these days, a moderate Republican. I’m not sure they exist anymore or where Ike would fall on today’s political spectrum. Looking back, I understand that my parents had a choice to make between two worthy candidates. Both men ran for president out of a sense of duty to country. Both were honest, honorable, decent men. In light of today’s political climate, I’m pretty jealous that my parents had this choice.

I miss my parents, but I’m glad they didn’t live to see the bitterness of the 2016 election between two flawed candidates. I have no doubt they would have supported Hillary out of party loyalty. They were both thrilled to support Barack Obama in the 2008 primary and cried tears of happiness when they watched his victory party in Grant Park. They would have been horrified and frightened by the current president.

A version of this was originally posted in MidcenturyModernMag, February 9, 2018.

Tags: Eisenhower, 1950s, I Like Ike. moderate republicans
Characterizations: been there, well written