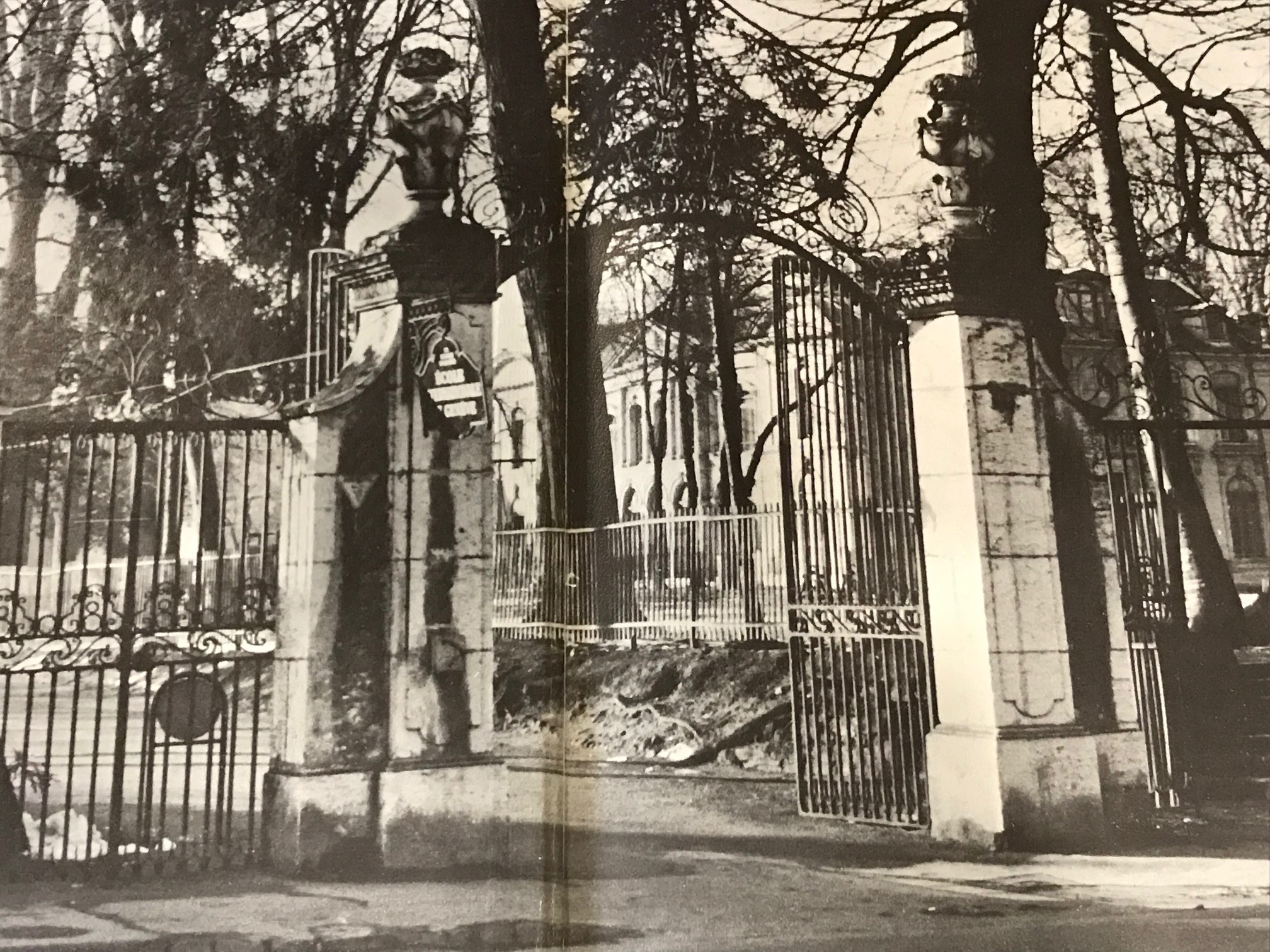 Everyone who remembers junior high as the best time ever, raise your hand!  I see only a few hands out there. That awkward time of emerging pubescence and insecurity can be tough.  My mother taught eighth grade for a while (“the last chance to make a real difference before hormones cause havoc”), and my older sister had just finished it, so I had a glimpse of the future at East Lansing Junior High–and it didn’t look good.  I was In sixth grade, and already experiencing grade school mean girls and uncomfortable boy-girl parties (for which I suffered my first stockings with a garter belt–ugh!).  So it seemed like a reprieve when our family moved to the other side of the world, and just in time.

I had a glimpse of the future at East Lansing Junior High--and it didn't look good. It seemed like a reprieve when our family moved to the other side of the world. I wasn't sorry.

My seventh-grade year was spent in Dacca, East Pakistan (now Dhaka, Bangladesh), where we were posted for two years–very far from Michigan.  Dacca  was a steamy tropical delta with monsoon floods, rural economy (then called “third world”), post-partition remnant colonialism, different dress and language and customs.  I won’t belabor the many memories, but school and classmates were one part.

I met kids from the small community of ex-pat families:  Penny, from Hawaii, whose mother wore muu-muus;  Pam (and her irritating younger brother Larry), who taught me to make candy by burning sugar in a pan and then to climb up on the roof for the first cooling monsoon rain;  Ann and McKay, the younger Taylor kids with frenetic energy, who would take turns creeping along a ledge surrounding the roof of Mrs. Barr’s house, where she gave us French lessons.  A local girl across the street who spoke mostly Bengali taught me to play a game with stones a bit like jacks.  Jackie’s family from Texas left us with their records when they moved away, ones I never would have heard otherwise—Marty Robbins Gunfighter Ballads, Dorothy Provine Roaring Twenties, Dinah Shore.  Even Pat Boone. 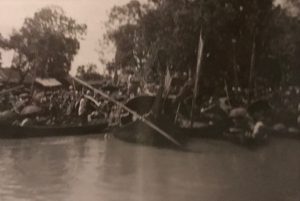 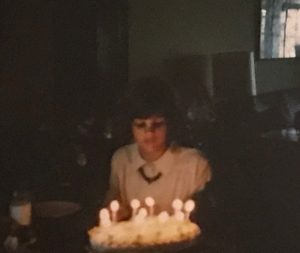 My seventh-grade class in the Dacca American School had a grand total of somewhere between five to twelve students depending on the month. We put on a ridiculous version of “A Midsummer’s Night Dream” adapted by one of the teachers. The day of the performance, in a mild panic, someone threw a horn at me to blow to announce the arrival of one of the characters, not realizing I had no idea how to do that.  The giant “PFFFFFFTTT!” whoosh of air was in keeping with the overall quality of the production—did everyone laugh?  How could they not?  Even now the memory of it cracks me up—unlike the humiliation of the moment.  My erstwhile “boyfriend” McKay, pranced onto stage in his Puck costume proclaiming, “I’m the king of the fairies!”, and that was pretty spot-on, given how he ultimately ended up being one of the most flamboyant gay men I have ever met.  But I digress.

The quality of the classes may have been marginal, the classmates an eclectic mix, and the daily life a huge change, but I was still content to be in Dacca instead of East Lansing Junior High.  I couldn’t complain about a few remarkable trips either (West Pakistan, the Hindu Kush).  However, the school devolved into pretty much a correspondence school by high school, and my mother was adamant that the following year I join my older sister at boarding school in Geneva, where she had already spent her ninth-grade year.

A Swiss boarding school!  It sounded like a fairy tale, a bit daunting, a bit exciting. We were enrolled at the Ecole Internationale (“Ecolint”).  It was mostly a day-school, serving the international community since the days of the League of Nations.  The jump from the subcontinent into the heart of “first world” Europe was abrupt, and thrust me into the privileged side of the global divide.  Please bear with me.

Ecolint offered tracks in French for Swiss or French Baccalaureates, or English for British or American exams. I was on the English side, in “Form 2” (eighth grade), divided into 4 sections by ability.  The stern and aptly-named Mr. Shade interviewed me in a no-nonsense Scottish burr and put me in 2B when I modestly told him I did “pretty well” in school.  I recall classes in chemistry (Mr. Anthony), physics (Mr. Phillips), biology, “maths”, French, and history—and Mr. Shade for English.  When the teacher entered the room, all would stand.  When a question was asked, students raised hands.  Each class required a special notebook, and all work was completed in fountain pen, which was a challenge to use without making an inky mess. We learned to play “rounders” in physical education, a sort of ersatz softball/cricket game; our outfits were odd green skorts, or “trainers and jumpers” (athletic pants and sweaters).  When the teacher admonished us to “pull up your socks”, I obediently bent down and did just that, only to incur her wrath for being “cheeky”.  The beleaguered Mr. Lugg from the music department organized musicals (“Amahl and the Night Visitors”, “Down in the Valley”) with lots of extras (me).  The productions were actually pretty good—and orders of magnitude better than our poor Dacca debacle. 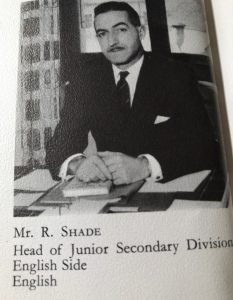 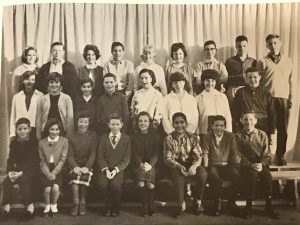 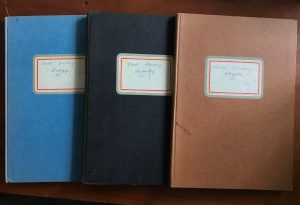 I couldn’t throw these away! 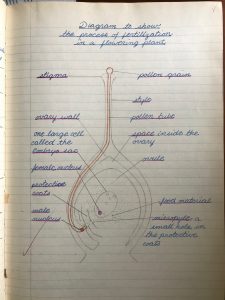 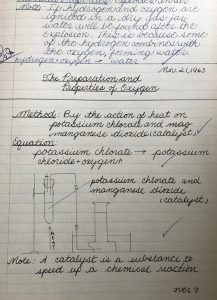 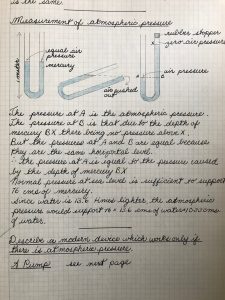 The small number of boarders in the “Internat”–from Forms 2 through 6, about 60 of us in all–lived on campus.  We were treated well, and I got know the boarders better than my classmates—they came from the US, UK, Canada, Liberia, India, Sweden, Germany, Belgium, Iran, Japan, France, and even Switzerland—and surely more places I can’t recall. They seemed, and were, older and more worldly than I. I can’t say I was homesick, but am an introvert, and it was an effort to find my comfort zone.  As one of the youngest “interns”, I lived in the Junior Villa with about 6 other girls. My sister was in the Senior dorm, with maybe 20 others, and both Senior and Junior boys were in their own buildings. We would meet for meals in the dining hall, where I hung out with Sridar and Phillip, and tried to avoid the senior Michael who seemed too interested in me.  Morning always had cereal and yogurt—the creamy Swiss type with fruit mixed in.  For a special treat, we would vigorously mix molasses together with butter and smashed it over French bread.  Maybe once a month we got everyone’s favorite dinner–steak and pommes frites.

Since there was no electronic communication, and phones were prohibitively expensive, my mother kept up a steady stream of correspondence on aerograms, every wafer-thin folded sheet filled with news of home.  In November, all the Americans were suddenly summoned together and, while we huddled in apprehension, we learned that Kennedy had been shot.  My reaction: “Oh no, now Johnson will be President!”

We didn’t have much time allowed off the campus.  We indulged in the patisserie at the tram stop next to the school, and on the short Wednesday afternoons might take the tram into town.  There my sister introduced me to Movenpick, the only place you could order a hamburger, but you had to eat it with a knife and fork or face stern Swiss opprobrium–it could even have been illegal.  By happenstance, a girl I knew from Michigan was a day student at Ecolint, and we spent time at her apartment down the street listening to pop music and commiserating; she was bullied, but I was not, and we became lifelong friends. One day we rode bicycles into town and through a park by the lake, where we were intercepted by a local police officer blowing his whistle.  Not allowed!  Where were our parents?  A torrent of French we couldn’t understand.  Everything was hard.

I washed my face every morning with the cold water in the sink, and visited the shower in the basement once a week.  One morning I got my first period.  When my emerging breasts got sore from gym class activities, I searched at a downtown department store, but they had nothing like a “training” bra.  I was advised somewhat archly by the clerk that, “Je suis desolee, mais je ne peux pas vous aidez si vous n’avez pas de poitrine.” (I can’t help you if you don’t have any breasts.)  I was mortified.

Since we were too far away to return to East Pakistan over holidays, my sister and I were signed onto a winter break ski trip at Zermatt.  How fabulous was that? It was, but it wasn’t.  I was the only one who didn’t know how to ski (lace up leather boots, long skinny skis, instructors speaking Swiss German), and was the youngest one on the trip, so I soldiered on alone, falling off T-bars and trying to keep up.  I ordered a root beer at an apres-ski gathering, and got a real beer instead.  My parents sent Christmas presents as a surprise, and I cried because no one else had any, and I didn’t want them and then felt guilty that I didn’t.  I just felt out of place.

The spring break school trip to Russia was stereotypically gray behind the 1964 Iron Curtain.  It was only 20 years after World War II.  Red Square was filled with a long line to see Lenin in his tomb and the shelves of GUM were sparse.  We dined on borscht and bread a lot and were watched closely by the host Russians. The palace in Leningrad was amazing (malachite columns!) and the trip to Warsaw sobering with a tour of the destroyed Jewish ghetto.  As our train crossed from Czechoslovakia to Austria, guards entered each cabin to demand identification, while others searched over and under the carriages for stowaways.  I hadn’t realized how stressful it had been until we crossed the border and I could breathe again.

Happier trips included a hike up the Saleve, the mountain overlooking Geneva; I had my first café au lait on the way.   A field trip to France introduced me to Avignon, Arles, and the divine nougat of Montelimar.

When it came time to leave at the end of the year, I lingered by the school’s front gate and reflected.  It hadn’t been a fairy tale.  “Don’t”, I clearly remember telling myself, “don’t ever think back sometime in the future and romanticize this year.”  Don’t forget that I was lonely, it was difficult, and I wasn’t happy.   But was I sorry for that year?  No.  I knew I had learned a lot in ways I probably didn’t even know yet, didn’t want to be ungrateful, and presumed I would appreciate everything more someday.  Which of course, I did.

Those two years of an inevitably bumpy transition into adolescence bounced me through vastly different cultures and disrupted any sense of continuity, and the reverse culture shock of a return to U.S. High School lay ahead.  But any difficulties were more than worth it, and best of all, I had avoided East Lansing Junior High!  No regrets.