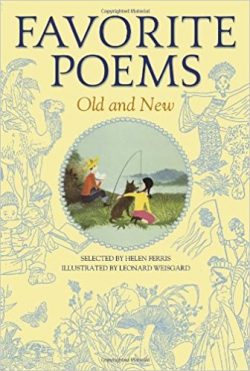 When I was a little girl, we had a great big book of poems. The dark green book with gold lettering was called Favorite Poems Old and New, selected by Helen Ferris. Divided into many sections, the book covered a vast number of subjects: Myself and I, My Family and I, My Almanac, It’s Fun to Play, Little Things that Creep and Crawl and Swim and Sometimes Fly, Animal Pets and Otherwise, On the Way to Anywhere, From the Good Earth Growing; Roundabout the Country, Roundabout Town; My Brother the Sun, My Sister the Moon, the Stars, and Mother Earth; Bird-Watcher; People to Know; Friends to Make; Almost Any Time is Laughing Time; My Fancy and I; Sign of My Nation, Great and Strong; From All the World to Me; Story Time is a Special Time; and From the Family Scrapbook. With its acknowledgments, indexes of authors, titles, and first lines, this book runs to almost 600 pages, no kidding. I guess you could call it a weighty tome.

I eat my peas with honey, I've done it all my life. It makes the peas taste funny, But it keeps them on my knife. --Gelett Burgess

Of course, I am not recalling any of this from memory–once I found that the book was still in print, I ordered a copy. I had visions of sitting with my grandchildren and introducing them to the ones we used to beg my dad to read: all the poems by Ogden Nash and Edward Lear, all the limericks, “Jabberwocky,” and other Lewis Carroll favorites like” “Father William” (“You are old Father William,” the young man said, “And your hair has become very white; And yet you incessantly stand on your head–Do you think, at your age, it is right?”),  and “The Walrus and the Carpenter.”  We never got tired of hearing the poems of Gelett Burgess (“Purple Cow” and “Peas”). A.A. Milne is well represented in this book, as well he should be.

We were introduced to spoonerisms with Lear’s “Once a Big Molicepan.” Hilarious.

At bedtime, my father read to us from this giant book o’poems. Depending on what he was in the mood for, he would read us about the brave Barbara Frietchie in a poem by John Greenleaf Whittier (“Shoot if you must, this old gray head/But spare your country’s flag,” she said.) Or maybe he would read us “The Charge of the Light Brigade” by Alfred Tennyson:

I loved the poems of Robert Louis Stevenson, especially “My Shadow.” 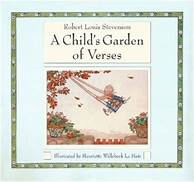 Not only did I love the stories in the poems, but also the new words and phrases: India-rubber ball, or arrant sleepyhead.
One of my favorites: “The Swing”:
How do you like to go up in a swing,
Up in the air so blue?
Oh, I do think it the pleasantest thing
Ever a child can do
My across- the-street- neighbor had a swing set, and I spent many happy hours up in the air so blue.
Here’s a good one by Rachel Field called “Some People” that resonates with the grownup me as much as it did the child me:
Isn’t it strange some people make/You feel so tired inside,/Your thoughts begin to shrivel up/Like leaves all brown and dried!/But when you’re with some other ones,/It’s stranger still to find/Your thoughts as thick as fireflies/All shiny in your mind!
Hearing these poems as a young child instilled in me a love of language and the sound of words. They appealed to my imagination and my sense of humor. And I learned what Stevenson meant when he wrote about “The Land of Counterpane.”
Years later, I became a big Rocky and Bullwinkle fan. Much to my surprise and pleasure, several of the poems my father read appeared (somewhat edited) as a feature on the show.
William Wordsworth’s “Daffodils” gets the Bullwinkle treatment here:

To an Athlete Dying Young
by Dana Susan Lehrman
‘We are the Music Makers, We are the Dreamers of Dreams”
by pattyv

Poetry in Motion
by Suzy