Once Upon A Time (Revisited) by jonathancanter
25
(36 Stories)

Prompted By Do You Believe in Magic?
2 comments. 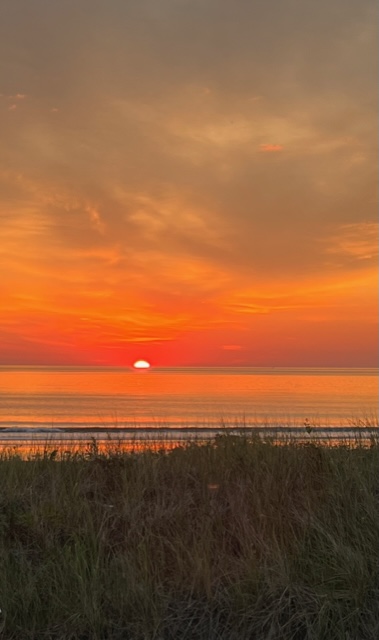 [Author’s note to Retrospect readers: I published an earlier version of the below story under cover of the recent prompt for “magic.” Since then the story grew to include my recollection of the second act that followed my dawn dance with the gull and the dog, as follows:]

Call me ungrateful, but I lacked a plan for the balance of the dawn, or for the rest of my life which stretched before me like the enormous ocean, and I was alone.

Was the last dawn of summer, not as designated on the calendar which I know to be September 22, but last of the summer presence, of unthreatened mildness, balminess, calmness of the ocean and sky, a lingering season of ease and laxity before the alarm bells go clanging and the worries begin again.

I walked onto the beach, face to face with dawn’s broad smile, pink spread like lipstick across the horizon, the fire ball rising over the line, illuminating the mirror of ocean and accompanied by glory, all of which happens in the depths of January, I assume, except the winter colors are darker and harsher, the winter air is sharp and cold, likely brutalist, and dawn’s smile likely a furrowed brow. One cannot scamper semi-clad into the winter waves unless one is doing an experiment in pain tolerance.

Within an hour it all changed.  The summer ended and the next season began.  An erasing breeze blew across. The ocean pocked up with whitecaps. The temperature fell and the sun ran for cover behind a bank of clouds.

Here’s my memory of the hour before the change.

I was drawn to the ocean, flat as a pool table, warm like a bath.  I waded waist deep, giving homage to the sun’s ascent (and the sensation of rising trumpets and strings).  I submerged.  When I came up for air, I wasn’t alone.  I was a trio with a sea gull and a passerby dog.  The gull and I floated. The dog paddled with us, providing instructions and aesthetic purpose.

The dog was our ballet master.  We circled and bobbed at his urging—arms, wings and paws in unison.

I would call this interspecies communication of the third kind.

The dog?  Maybe be had herding instinct.  Maybe he trained at Juilliard.

The gull?  He swam without a ripple.  Proud and graceful as a swan.

Me?  I was young and open to new experience.

I speculate that our pas de trois was not so unique, in the annals of time and experience. Variant brains have been forming since protozoa were young, sharing the experience of dawn over the ocean, which one doesn’t need a recumbent thumb or upright posture to appreciate.

Fifty years have passed, and I haven’t been asked back by the troupe.  Arguably I missed my chances by growing old and cautious, spending dawns in bed, far from the ocean.  I can’t realistically expect a passerby dog to break into my house, pull me from bed, and blow cobwebs out my ear.  From time to time, I’ve looked deeply into the eyes of a dog or a bird, looking for a wink of recognition.  To date no one has spilled the beans, except for me, here.

But that’s not all.

Memory is not a lock box, sealing its contents intact, until the latch is opened, and they spill out as they were before.  More like the ocean, with the appearance of a hard surface but soft and malleable to the touch. I reach in and draw out a prism of water, which reflects on the past, and slips back through my fingers.

So it is that I remember what happened next as I stood alone on the shore in the wake of my dance with the bird and the dog.  I’d been uplifted by them, no doubt.  If they were sent as a sign, fine, much appreciated, mind-expanding, a glimpse behind the curtain, but I desired more. Call me ungrateful, but I lacked a plan for the balance of the dawn, or for the rest of my life which stretched before me like the enormous ocean, and I was alone.

I did not have the tools or wherewithal, or a boat, or an entry point.

Which is when I observed a form approaching me from far up the beach, a form which became identifiable as a person, then as a female person, then was within arm’s reach, then embraced me and I her on the beach for seconds, maybe a minute, until we separated, and she proceeded in her direction.

Seems unlikely, I know.  Assuming she was real, she might have been from the halfway house which was situated up the beach, and she might have been hoping for an affirmation of herself, as I was.  On a wordless level, without any attempt at explanation, or continuation. Heart to heart, a close encounter of the third, fourth, or possibly fifth kind.

Then the wind kicked up, and the season changed. 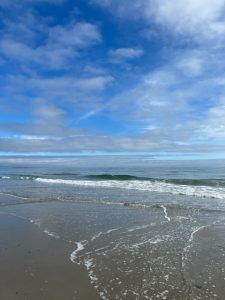 2 Responses to Once Upon A Time (Revisited)