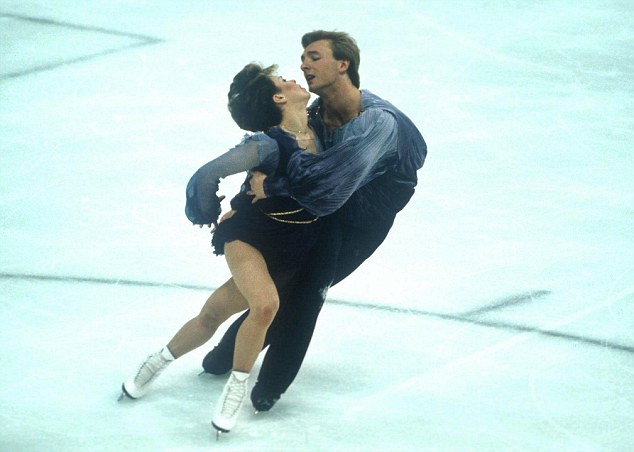 The 2018 Olympic ice dancing competition has just ended, wardrobe malfunction and nip-slip included. The costumes and skaters have gotten ever skimpier as the envelope is pushed to the limit. There were some beautiful performances this year, but for show-stopping exquisite sensuality, I find myself fixated on the 1984 Olympic performance of Torvill and Dean, the team from Great Britain.

When some random country prints a stamp commemorating your performance, you've made an impact.

For those uninitiated, this was one of those seminal moments when something altogether new, different, exciting, and brilliant happened. Like other leaps in art, music, science etc., it emerged from the old forms, and took the discipline to new heights by re-conceptualizing and re-imagining them. 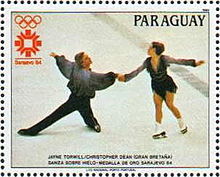 When ice dancing first became an Olympic “sport,” it had some of the same credibility issues as rhythmic gymnastics and synchronized swimming. Yes, it takes a great deal of skill, but is it a sport? Half of the score in these events is an artistic one, but that’s true of snowboarding’s half-pipe, and no one would argue that it’s not sport. We loved to hate-watch it.

In the early years, the skaters really were ballroom dancing on ice. If you’ve ever seen a professional ballroom dance contest, you know how stiff and regimented it is. The worst part was when instead of the short program of today, every couple had to do their interpretation of one specific pre-determined dance. The year it was the paso doble, I thought I’d lose my mind.

Then came Torvill and Dean. It’s hard if not impossible to view this performance from the perspective of today. It may seem tame at this remove, but at the time it was revolutionary. It began inauspiciously (for me) with the music: Ravel’s Boléro. No! Not five years earlier, Boléro was the soundtrack to the hit movie “10,” which ruined its serious cred forever. However, its driving, relentless energy turned out to be the perfect selection for this performance.

The tension was palpable from the beginning. They began kneeling on the ice facing each other swaying side to side looking much like courting birds.* OK, this is different. Once on their feet, their movements were slow, sinuous, rhythmic. More skating than dancing. Really different. Moving in twists and turns, holds and embraces, they became as one, barely letting go of the other. More foreplay than skating. As the choreography and music built in intensity, and the performance ended with them collapsed on the ice, the crowd went nuts. We all need a cigarette. This was the ultimate expression of the art form. Collective head slap. We knew in that moment we’d witnessed something transformative.

The judges agreed: it was the first across-the-board perfect artistic scores in history. I think the fans would have stormed the ice if it had been otherwise. There may never be another like it.

* Ravel’s original Boléro composition is over 17 minutes long. Olympic rules state that the free dance must be four minutes long (plus or minus ten seconds). When Torvill and Dean went to a music arranger to condense Boléro down to a “skateable” version, they were told that the minimum time that Boléro could be condensed down to was 4 minutes 28 seconds—18 seconds in excess of the rules. Torvill and Dean reviewed the Olympic rulebook and found that the actual timing of a skating routine began when the skaters started skating. Therefore, they could use Boléro if they did not place their skate blades to ice for the first 18 seconds. They timed the performance so that when Torvill first placed a blade on the ice, they would have the maximum skating time remaining. (Adapted from Wikipedia)

One Response to Paradigm Shift