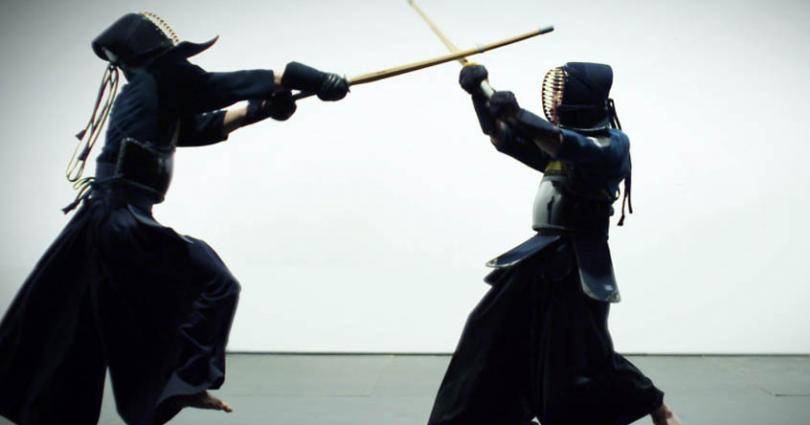 I’ve never been a particularly athletic person. I could swim, ice skate, and, when in college, I enjoyed and did well at fencing. When I saw this prompt I thought about writing up the general perils of PE, and particularly the horror of gymnastics, which I was forced to do in 7th and 8th grade, when I was 5 feet 7 inches tall and weighed 135 pounds–which is my exact size now. But I’m sure others had the same experience. My kendo practice was a much rarer experience.

For the first and only time, I saw humans flying, literally levitating around the room, so graceful that their bare feet never made a sound when they landed.

I discovered kendo in the late 1980s while I was working on a project for a Japanese company and attended an Obon festival. Among the martial arts demonstrations was kendo, literally, the way of the sword. I was immediately intrigued–it looked like full contact fencing on steroids!  After the demo, we were allowed to try it out, and I was hooked. My then husband, a middle distance runner who disliked contact sports, thought I’d lost my mind.

In kendo, you wield a flexible bamboo sword (the shinai) that you strike, somewhat like a saber, against your opponent’s heavily armored body. But scoring a point is difficult because only three areas count: the top of the forehead (men), the sides of the trunk (doh), and the wrists (koteh). Not only must you strike cleanly, you have to call out, in a karate-like fashion, the area name before you hit. All the while your opponent is defending themselves by body checking you.

Practice was rigorous and grueling. As with other Japanese activities, there was a rigid system for everything, starting with how to put on all that armor: kneel, tie a men kerchief around your head, lace your breast plate, put on and lace your helmet, put on your gloves. To warm up, run around the dojo with the 25 pounds of armor. Get used to visual limitations through the metal bars on the helmet. Swing the shinai until you think your shoulders are going to fall off.

Everyone, all ages and ranks, practiced together, so it was wonderful to learn from the most skilled teachers (senseis). The master was 84 years old, an 8th degree belt, which was one of the highest in the United States. Even though his knees didn’t work like a young man’s, all he had to do was look into my eyes and he knew where I would move, and I was beaten. The youngest were the 7-year-olds, and their parents were tough on them. I ended up partnering with one poor little boy who looked up at me in terror and said, “Oh please, don’t hit me too hard.” I wasn’t supposed to show any mercy, but I whispered, “Don’t worry, sweetheart, I’m a beginner too.”

Women were relatively new to kendo, in Japan and elsewhere. We were treated well in my dojo, to promote the sport. There were women’s kendo clothes, but it turned out I was too tall to fit them, so I had to get men’s clothing and equipment and improvise, padding the helmet and gloves because they were too big. Most of the time the senseis were as demanding of us as the men, with just two concessions: we got extra practice with parrying body checks so that a stronger man wouldn’t send us flying, and we were allowed to drink water during breaks, a practice discouraged for the men. (Turns out because of our body composition women got way hotter in all that armor than men, and we were fainting too often.)

With all that punishment, why did I like kendo? It challenged me physically, mentally, and spiritually. I learned I could be hit and wouldn’t fall apart. It was OK to lose as long as I did my best and fought honorably. Alas, after about a year, I realized I’d need to practice a lot more often to get to the next level, and responsibilities of adult life were taking precedence, so I reluctantly sold my armor to the 13-year-old son of one of my practice partners.

I’ll never forget the evening that Japanese visitors, young men in their prime, came to our dojo to practice with us. After our usual practice, we were allowed to watch them sparring. It was like magic. For the first and only time, I saw humans flying, literally levitating around the room, so graceful that their bare feet never made a sound when they landed. Their shinais moved so fast I could barely see the strikes. It was a wonderful sight and is my lasting memory of the art of kendo.