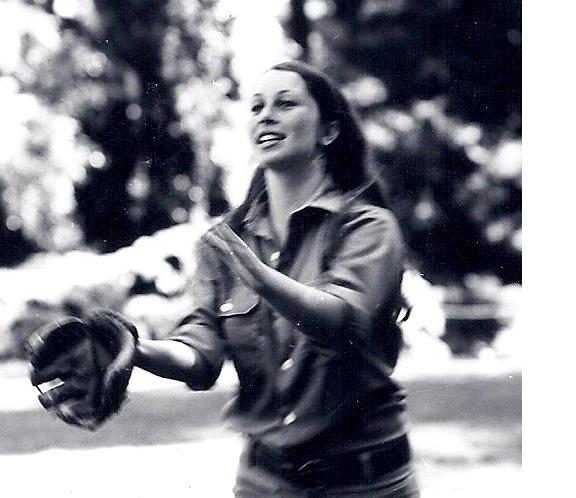 Family legend has it that my dad fully expected me, his second daughter, to be a son.  I imagine him pacing in the waiting room in the maternity ward, punching his fist in a glove, thinking about the times he’d play catch in the backyard and discuss the finer points of the game with a willing child. If he was, in fact, disappointed at having two girls, he never let on. And he went ahead and played catch with us and taught us (two lefties, no less) how to swing a bat. Or a branch. Why he never actually bought a bat for us, I’ll never know. Even with our limited equipment (branch and tennis ball), my sister and I still managed to break a neighbor’s window with a hard-hit shot to right, which sailed over the fence and smashed the glass next door. 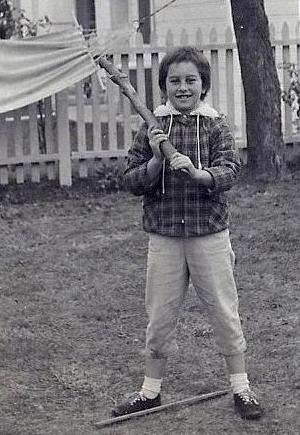 As a teacher himself, he took an interest in our schoolwork–but as a life-long baseball fan, he also quizzed us about our performance on the playground diamond. Instead of “How was school today?” he would greet us with “Did you get any hits?” We learned statistics by following batting averages. He took us to see the San Francisco Giants play at Candlestick Park, where we bravely hunkered down in the wind and cold to root, root, root for the home team.

I had a serious swing even during fun games in high school. 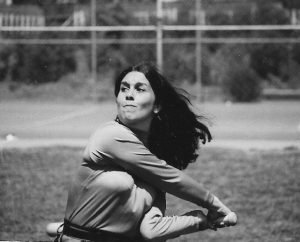 In college, a group of friends used to get together for friendly games of softball. Despite all logic, I mostly played second base–a position that lefties do not usually play. But I liked being in the middle of things, and that’s where I usually ended up. My then boyfriend (now husband) gave me a wonderful blue left-hander’s glove, which carried the signature of Oakland A’s pitcher Vida Blue. That glove was my pride and joy, and I only wish I had a color picture of it. 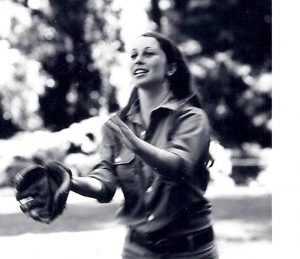 During the years when I was a young mother, I found a group of women who played softball at the local schoolyard during the summer months. Our teams consisted of moms and kids, and we had a blast. We rarely let men play in our games because they told us where to stand and to “choke up” when it was our turn at bat. I loved playing so much, I timed the birth of my second child for the off season so I’d be ready to rejoin the team in June.

As my dad got older, my husband and I took him to see the local team play. We paid some attention to what was happening on the field, but used the time together to talk about other things. To sit in the sun, have a beer, and enjoy each other’s company–those were precious hours.

Several years ago when I worked at a high school, the faculty and staff challenged the seniors to a game near their graduation. One of the teachers, a friend, offered to give me some coaching before the game. He checked my stance, watched how I held the bat, and told me how to position my right foot. Following his advice,  I shocked everyone when I hit a double up the middle. My dad would’ve been proud.

At the end of my MFA program, tradition called for a game between the graduates and the first year students, but there wasn’t much of a turnout. (I was the only woman, and I had a couple of decades on most of the other students.) Plenty of beer, but not many participants. We played anyway, and, as I recall, I got caught in a rundown and was tagged out rather emphatically by a poet.

And that was the last time I played baseball.

2 Responses to The Old Ballgame