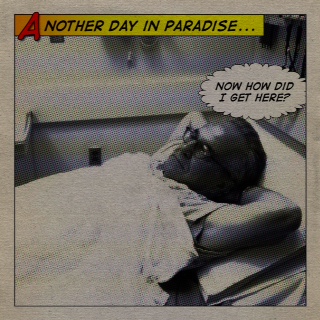 I was too short to play basketball. I wasn’t that great at baseball, although I love the game. Our little high school couldn’t afford a football team. Then along came soccer. Soccer was affordable and — so they thought — less dangerous than football.

Soccer was perfect for me. I swam in summer and skied in the winter. My body would change with the New England seasons from smooth-muscled swimmer to gnarled, hard-muscled skier. Soccer would be a perfect way to get in shape for racing — or so I thought.

So, I joined the new soccer team, coached by one of our most amazing teachers, Karl Lindquist. He was a great geometry teacher and was kinda bohemian in those days of conformity. I later found out that Lindquist had been drafted out of an idyllic life on Nantucket at eighteen, had landed at Normandy on D-day and served as a forward scout (life expectancy two or three days) all the way across France to Berlin.

Mister Lindquist never talked about his war experiences but was a decorated soldier who later wrote a memoir of his battle days called Youth Interrupted, certainly an appropriate title that describes the plight of so many young men and women who are snatched up by the jaws of war. But I digress…

Our soccer field was surrounded on three sides by a hardwood forest that burst into autumn reds, yellows, and oranges as soccer season swung into October. I still have vivid recollections of jogging warm up laps around the playing field surrounded by that explosion of color, the still, sun-warm afternoon air smelling of distant burning leaves and up-close sweat and lineament.

The first game of the first soccer season approached. I had been chosen to play first-string defense. It was appropriate: although I was low to the ground, I had powerful legs and a chunky body, could clear the ball well past mid-field and block the opposition’s speedy but lightweight forwards. In short, I was a stocky obstacle with a slingshot return. Bravo.

For our first match, we were slated to play the Cambridge School in Weston, a classy prep school that had been playing soccer since, say, the Civil War. We didn’t stand a chance but everybody was game. The basketball cheerleaders suited up to urge us on, a bouncy phalanx of blue-and-white clad motivators. A big opening-day crowd showed up, the whistle blew, and the match commenced to begin.

Cambridge scored countless goals in the first half. They had a W-shaped squadron of giants who would appear out of the chaos of our defense and launch a nasty cross-goal offense, usually instigated by a large, blond young gentleman who had obviously charged many a fullback before.

I tired of watching him — almost relaxed — arc into my territory and hook the ball across the goal with perfect timing for the center or the right forward to punch through our bewildered goalie.

A few repeats of this maddening assault and I became… let’s just call it ‘frustrated.’ I began to anticipate him and devised a move that would swing me behind his frontal attack to arrive at the point where he usually cleared the ball. Hah!

There I was, hooking behind and then ahead of the towering son of a bitch. I looped around behind him and Wham! slammed the ball out of his path. Ha!

The young gentleman’s high-velocity kick arrived where the ball had been a millisecond earlier. Instead of finding his mark, his boot found my left foot, leg fully extended, muscles still taut from my clearing kick.

A funny, mushy vibration swam up my leg as he ran past. I looked down to see my left boot, with foot inside of course, turned past 90 degrees away from the direction my body was facing. I decided I’d better sit down.

Being driven off the field in an ambulance didn’t do much for soccer’s reputation at my high school. My lower left leg was a mess — spiral fractures of both tibia and fibula, an internal reduction that enabled the doctors to wrap the splintered bone in cuffs replete with screws. So much for skiing that year, although by spring, I was able to ski on one leg with my sock-encased cast lifted off the snow.

There were upsides to the adventure: People treated me like a war hero. I learned how to walk down the entire school corridor on my crutches without ever putting my feet down. Ha ha. I was also introduced to morphine. Wow. During all the years that ensued, I survived the onus of that ecstatic, first-one’s-free experience by never injecting anything under my skin. But now, dear reader, it’s time to substantiate my title’s claim.

Yes, soccer saved me from the draft. As described in an earlier Retrospect post, I had argued myself into a conscientious objector’s I-0 draft classification after my student exemption, the precious 2-S, ran out.

Two years later, the Vietnam juggernaut had run too many young American boys through the meat grinder. General Westmoreland wanted more troops for his disastrous body-count war of attrition. The Tet Offensive threw everyone off guard. America’s cities were on fire. FBI Director J. Edgar Hoover warned President Johnson that he could not guarantee national security if Westmoreland took more troops out of America. In short, the warmongers were running out of fodder.

The Selective Service issued a recall bigger than anything General Motors could have anticipated. Every exempt young man was ordered to report to the nearest military induction center for a second physical.

We were all angry. We’d already been through this hell before. I had fought hard for my conscientious objector’s 1-0 status. Fuck the Army! But the recall included a threat of warrented arrest, so I showed up at the induction center. I hadn’t slept in days, hadn’t showered for a week, and reeked of alcohol.

The input officer, an African-American vet with a facial expression like a clenched fist, was not impressed by my Fuck-the-Army threats. Growling and cursing, I was shoved down the line, and ordered to strip. There’s nothing quite as awkward, homely, and unhappy as a bunch of naked shivering draftees. My mind was whirling — should I just bolt out the door naked? Should I urinate on the nearest officer? Stage a nervous breakdown? What?

We all endured the clichéd “bend over, grab your ankles” directive and submitted. We all passed, whatever that meant. After a short ritual of poking and prodding in less sensitive areas, we were ordered to pull up our pants and move along. A new bored and annoyed white coat entered. “Anybody with broken limbs. Step forward.”

Yikes! Of course! I could not believe my naiveté. I’d emerged victorious from my draft board tribunal, a proud bearer of a conscientious objector’s classification, only to realize that the metal in my leg — acquired so painfully but now well-healed — rendered me useless as a functioning, government-issue (G.I.) asset.

Another G.I. stamped my paper with a large, smeared 4-F, nullifying my hard-won, principled 1-O status. “Follow the yellow line,” he said. It led down the corridor to a door. I was outta there, bleary, blinking, too numb to feel relief, still shaking with rage, trepidation, and paranoia.

I patted the lumps beneath the skin of my lower left leg. I could feel each screw the edges of the metal cuffs, embedded close to the surface of my shin. It hurt.

These days, my soccer injury has begun to remind me again of the damage done. There is nothing to regret but an injury of that nature lasts a lifetime. Still…

That’s how soccer saved me from the draft.

11 Responses to How soccer saved me from the draft