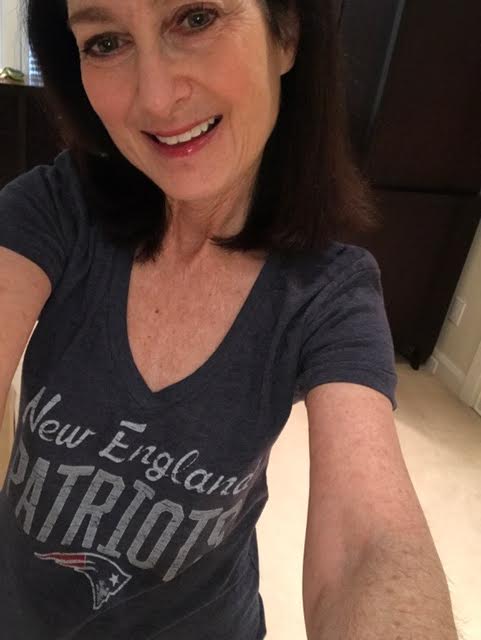 Haters gonna hate, but I gotta tell you, it is fun to root for a winning team. Over the last couple of years, I have become quite the Patriots fan, political bedfellows aside.

I grew up in a household with a father who watched football, baseball and golf constantly, then I married a huge sports fan, so I’ve been surrounded by televised sports my whole life. Guess sports crept into my psyche through osmosis.

I always enjoyed going to my high school football and basketball games, but the teams were awful, so that was largely a social event. At Brandeis, we had no real football (for a while we had club football and I attended those games). I loved going to the basketball games. As I confessed to a ball-playing classmate, a well-played game was a little like watching a sporting version of ballet, as the game ebbed and flowed across the court. I briefly dated one of the star players and was friendly with lots of others, such was my attraction to the game. I can still hear the announcer calling the games. That was more than 45 years ago, but he had a distinctive style. I lived with a few of the cheerleaders (at a time when this was distinctly uncool during the great social upheaval of the day). Once, when a petite one was sick, I suited up and sat on the bench in her absence. I was always a rah-rah sort of girl.

The first Boston team I followed closely was the Celtics during their glory years. With work friends, we had a piece of a season ticket, lived right in Boston and walked to the old, non-air conditioned Boston Garden. We loved those days. We were true fans and it was easy to love the genius of Larry Bird and the fabulous players who surrounded him. I remember wearing a tank top and sitting as still as I possibly could, so as not to sweat buckets during a play-off game during the winning 1984 season.  In my seventh month of pregnancy, I cried my eyes out when we lost the championship in 1985. To soothe myself, we went out after the loss for ice cream, ran into a raving Lakers fan who mocked me. I nearly tore his throat out. Chalk it up to hormones…or not. We were there at the opening of the new Garden and the dismal era of slick Rick Pitino. By this point, we had our first child, Dan traveled constantly, getting babysitters was difficult and we had moved to the suburbs. Tickets were very expensive and eventually, our whole group gave them up. Between babies and travel, we stopped watching televised sporting events except Patriots games and golf.

At the beginning of the Patriots franchise’s life, they were a truly awful team. Robert Kraft bought them, brought on some great coaches and built them into a much-hated dynasty. Bill Belichick, with five Super Bowl wins to his credit, will go down as one of the greatest coaches in the sport. And Tom Brady, still going strong at 40, defies any description besides Greatest Of All Time. No, I am not happy with their politics. My stomach turned when I saw the red trucker cap in Brady’s locker. Gisele was smart enough to get Tom to remove it and shut his mouth about anything political. She claims to be environmentally concerned, so she must hate what’s going on right now. I was furious when the Orange Monster read a letter from Belichick at a rally in New Hampshire the night before the election. The famously laconic coach said it had nothing to do with politics; they are just golfing buddies. I’ve been in Bob Kraft’s house. His late wife, Myra, was a Brandeis trustee and hosted a few events for donors there. She wouldn’t have put up with this nonsense either, but Kraft said Trump called him every week after she died and was a true friend. Nice that he cares about his billionaire buddy. Too bad about our country.

Putting the above aside (and sometimes it can be difficult to do that), the Patriots are fun to watch and great champions. The team the rest of the country loves to hate and thinks they cheat. Belichick knows every rule (his father was a great coach at the US Naval Academy) and will push just up to the edge, use every advantage he can get. Yes, I know…first there was Spygate, for which Belichick and the team were duly punished; very harshly at the time, but the other owners sought more which led to: Deflategate. For anyone really paying attention and not pre-determined in your thinking, you know that this season, another team was caught with under-inflated balls and NOTHING happened at all. Other quarterbacks confess that they routinely tamper with balls. This whole crazy mess was Roger Goodell flexing his muscles and, due to the collective bargaining agreement, Tom Brady was powerless to do anything. One very cold day last winter, my car tire pressure warning light came on, as the tires deflated, then were fine once the car warmed up. It happens to car tires and footballs. The whole thing was a sham, pay-back because the rest of the owners wanted blood, plain and simple. Move on. Notice who won the second half of that game with regulation balls.

I’ve been watching the team closely for three seasons now…a great time to tune in with two Super Bowl wins in our column. I’ve learned about the players and positions, OTAs, passing up the seam, protecting the pocket, and other terminology. I always understood the basics of the game. Now I am learning strategy, clock management and other important points. And my husband is tickled (his word).

I have my favorite players (not who you might think). I loved Martellus Bennett this past season. I follow him on Twitter. He’s a hoot. I loved that immediately after the big win, he announced he would not go to the White House, saying, “I am a black man today and will be a black man tomorrow.” ” I also have a wife and daughter”. Bravo, Marty. He wrote a children’s book and goes to hospitals and schools to read to kids. He has already signed with Green Bay (one of our hated competitors), and I will miss him, but he says he’ll still come back to read at Children’s Hospital.

I also like rookie wide receiver Malcolm Mitchell. Not only did he play his heart out, he did several interviews on TV and in the Boston Globe about going to college in Georgia, having only 8th grade reading skills, but knew he wanted to do better than glide by on his athletic ability. So he worked hard at his literacy, even joining a women’s book group outside of Athens, GA. The TV show visited him there, with a bunch of middle-aged Southern white women, talking about the book they read that month. Those Georgia women are now Patriots fans too. It was awesome. Now he, too, has written a children’s book, goes to schools, reads to youngsters and works on literacy programs. In addition to being great athletes, these guys are really making a difference in the community. So sometimes, athletes can be more than knuckleheads. And that makes the game even more enjoyable for me to watch.

The above essay was written (and shared on this site) months ago, but the Patriots are back in the Super Bowl. This year they battle against the Eagles, whose owner is from Newton, MA, has a home on Martha’s Vineyard and has a PhD from Brandeis…the world is so small. Martellus Bennett left the Patriots, but came back mid-season, played in a few games, was injured and out for the remainder. Malcolm Mitchell has been out with a pre-season injury the entire season. But Belichick and Brady continue to break records in their 16 seasons together. Love them or hate them, there can no longer be any doubt that they are the best at what they do. They have pulled out many a game in the last few minutes, causing their fans agita and delight, and the rest of the country some respect mixed with hatred and envy. Injuries, including the dreaded concussion have plagued the team this year. And Brady launched his own fitness brand: “TB12” with his guru and trainer, Alex Guerrero, stressing “pliability” instead of muscle building. It has kept him going at the age of 40, but there are rumors that it has caused a rift between him and Belichick. We’ll see what the future holds and how long this franchise can keep going at this incredible pace. I am not a soothe-sayer. Time marches on.