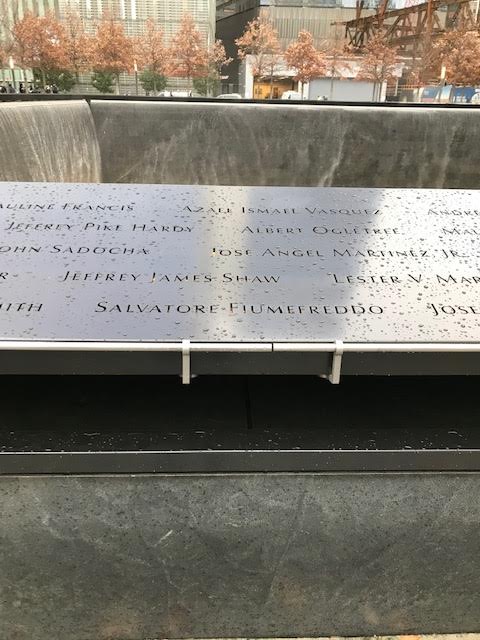 We didn’t know Victor 20 years ago. His wife is in a book group with several of our friends. They live in Newton and Martha’s Vineyard and now we, too, are good friends. Victor is Dan’s frequent golf partner and we go to dinner with the couple. One evening, he revealed why he retired early.

Victor was a telecom entrepreneur, finishing a meeting at the World Financial Center at 200 Liberty Street in the shadow of the World Trade Center Towers on the morning of September 11, 2001. He witnessed the attacks. As part of his recovery therapy, he wrote a lengthy essay about his experience. An excerpt appeared in the Martha’s Vineyard’s Times in 2015 and was reprinted this week. He submitted it to the 9/11 Memorial Committee, who were gathering testimonials for their museum and archives. It won a cash prize for memoir writing, which he donated to the Boy’s and Girl’s Clubs of Newton and Nantucket (his companion that day was from Nantucket). A phrase from the essay, (I will link to the whole story), appears on the wall to the room that memorializes the 2,754 souls who were lost that day, as one enters the main entry to the 9/11 Memorial in New York City.

While we still looked up, a man jumped from the building to the ground…At that instant, the towering glass and metal mass of billowing smoke became human.

He did not escape unharmed. He developed bladder cancer from inhaling those toxic fumes, underwent painful biopsies and chemotherapy. He is fine now, enjoying his retired life with his daughters, sons-in-law and grandchildren. He and his wife travel a great deal when there is no COVID to contend with.

He also gives back. Among his many charitable endeavors, he is on the board of the Newton Boys and Girls Club and works with 9/11 survivors. Just a few weeks ago, he told us about two sisters who worked in the towers. One, after many attempts, had just learned she was pregnant, called her sister in another office to tell her the joyous news. The newly pregnant sister was incinerated that day. Her sister survived. Victor works with the survivor to help her overcome her grief and survivors guilt. She will be doing a PSA for the 20th anniversary.

The last time we traveled to New York City, in November, 2019 (before COVID), we visited the rebuilt World Trade Center, took the tour, saw the slurry wall, the memorial to those who perished that day. It is a huge site; I had never seen it before. It really drives home the enormity of the loss, the number of names on the monument (some with white roses, left by grieving family members), and the effort it took to rebuild while paying tribute to the fallen. Today, the area is, again, a thriving hub of people and industry. 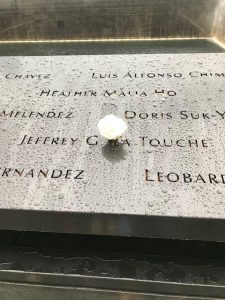 Close-up with flower by a victim’s name

Two of the flights came out of Boston that morning 20 years ago. Many of the losses were local. There is a memorial in the Boston Public Garden as well. Every year there is a public ceremony where names are read aloud, bells tolled. Remembrance helps. The Taliban are back in control of Afghanistan after 20 years of war. We must remain vigilant against terrorism, both abroad and domestic. Hate makes people do evil things.

A new Netflix film came out on September 3 called “Worth” depicting the efforts of attorney Ken Feinberg and a colleague to cajole Congress to create a fund for the survivors of the victims of 9/11 and how to equitably distribute those funds. On September 1, I watched a YouTube discussion from the JFK Library, hosted by film critic Nell Minow involving the film’s stars Michael Keaton, Laura Benanti, the film’s screenwriter and producer Max Borenstein, and Ken Feinberg and his colleague Camille Biros. The discussion was wide-ranging, but the thrust of it was about empathy, which in 20 years has all-but disappeared from the public arena. Congress, then led by Republicans, came together to form The September 11th Victim’s Compensation Fund for the good of the people whose loss was unimaginable (actually, as I learned from watching the film, it was to ensure that the airlines weren’t sued, but also about redress for the victims’ families). Michael Keaton (who plays Feinberg in the film), name-checked Jim Jordan, saying could we imagine these people doing that today? It is all about destroying the “other”, red vs. blue. No common good or empathy. And the rise of social media has made this so much worse, amplifying the worst instincts of people, hiding behind online personas. A really sad state of affairs.

An excellent opinion piece by Will Bunch, sent to me a few days ago by a good friend is worth the time to read.

The following is the description of what that day was like in my household, 20 years ago: