Prompted By My First Computer
12 comments. 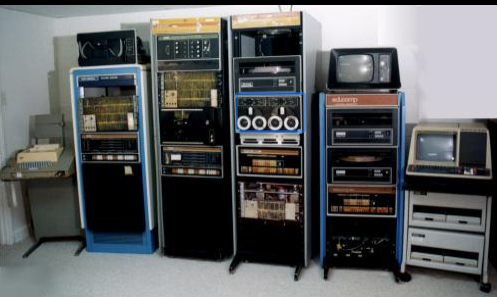 My husband was always a tech guy; first a programmer, then a systems guy, then a thinker – a management consultant. I came out of college with a Theater Arts degree and a teaching certificate. As he began grad school, I begged for a job in his office and they took the bait, thinking they could train me (Over-Educated, Under-Qualified). First I keypunched, taking the punch card decks to a service bureau in the building next door that had a huge array of IBM computers. I just dropped off the decks and picked them up with the print-outs the next day.

Within a few years, one of the smart people at SofTech configured a PDP-8 (the Featured photo), hardly a personal computer, but still, small enough to fit in a room in our office without special air conditioning. And he somehow decided that I should run it, as I was Chief Program Librarian. This computer was called a “minicomputer”, made by Digital Equipment Corporation, headquartered in Maynard, MA, about a half hour west of our office. Those computers had a fair amount of horse power in their day and the programmers in our office liked having their own computer, rather than having to pay to use an outside service. I’m sure the company had done a cost/benefit analysis and found it made sense to purchase this computer for the growing company.

I had no idea how to run a computer, but Barry (the fellow who configured and purchased this one), taught me how to maintain it, check to make sure it ran properly, order supplies for it, and the like. I never learned how to actually use it. I have no idea how to program. That skill has eluded me all these years, even though I always earned a living in the tech sector.

When I was selling, I always had a smart MBA-type at my side to answer the technical questions. I knew how to do the initial sales pitch, ask the right questions, listen carefully, make sure the prospect’s questions were answered, and ASK for the sale. But I never learned how to use whatever it was I was selling (at one point, even when I sold software, we had a deal where we could sell hardware too and I sold a Prime minicomputer to Coca Cola in Atlanta, GA, and Hardee’s Food Systems in Rocky Mount, NC. I was there for the installation, to make sure all went smoothly, but didn’t have a clue what transpired; a smart hardware/systems person from my company took care of that).

Dan, with two friends, bought one of the first IBM personal computers in 1981. The three of them were going to start a business. They thought about writing software to run small doctor’s offices, a good idea that they never got off the ground. The machine sat in our study for some time. Since then, we have been a 100% Apple family. Dan just bought a new MacBook Air for himself a few weeks ago. I still use the 10 year old desk top in the den. 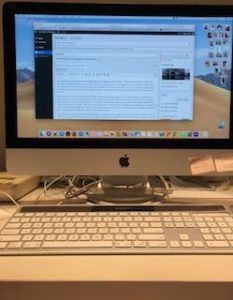