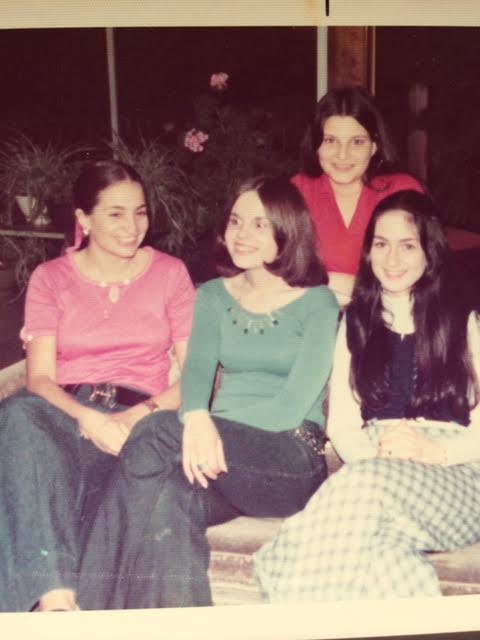 I had the IUD inserted just before coming home for spring break my junior year at Brandeis. It was a Dalkon Shield and not really meant for young women like myself. I lay in bed for the rest of that day, bleeding and in pain. In fact, I bled for a long time after.

I took my father and brother into my confidence, but never my mother, who would be hysterical and not know what to do with this information anyway. Immediately after returning to Detroit from Boston, we began an extended road trip, the last our entire family would take, as I married 14 months later and my brother would be ordained as a rabbi two weeks earlier, then begin his PhD, so be swamped with his studies.

My father drove a Buick at the time and we had our AAA TripTick route all marked out in orange marker. We headed to Baltimore to spend Passover with my cousin Louise and her family. Most probably, Aunt Sara, dad’s sister, was there too. We stopped somewhere overnight on the way and both my father and brother asked how I was doing…still bleeding and cramping was my response. They were concerned and consoling.

After celebrating Passover, we moved on to Williamsburg, VA. We had visited once before, when I was in 7th grade. That was a wonderful trip. We were all older now, but it was still enjoyable. Dad went off to play golf in the morning, while the three of us toured the historic sights. We dined in an old tavern at night. It didn’t seem quite as magical as it had so many years earlier, but still interesting.

On we went to Virginia Beach. One of my Brandeis suite mates lived close by and other friends were visiting for the vacation, so we stopped in there one night to visit Rozie (now long-deceased), Netsie, my roommate, and Drucy, whose father was a well-known rabbi, so my brother was interested in talking with her. Rozie’s parents were pleasant hosts to all us and we passed several hours there. But we were looking for a beach vacation and that was what we found in Virginia (debatable whether it was for lovers…we stayed at a family motel, but the beach was expansive).

Dad and I took a long walk, just as we did the day before I started Brandeis, up in Ogunquit, ME in 1970. Predictably, my nose got burnt. It was always good to have a long talk with my father. I’m sure we talked about the IUD. The bleeding and cramping had finally subsided and I felt better. Now 46 years later, I can’t remember what else we spoke about, but we never held back. He was my rock and it feels like a cruel joke that he has been gone 29 years. That sunny vacation day was the last time I walked with him alone without a care in the world.

6 Responses to Road Trip with Family