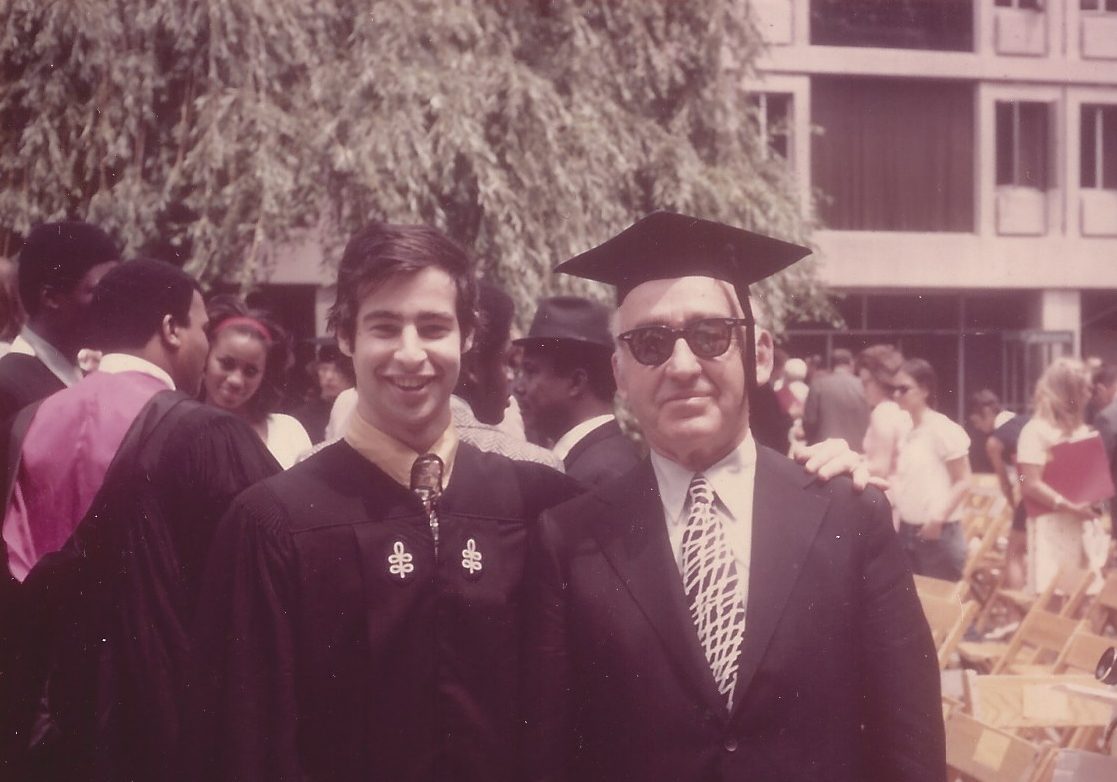 With my grandfather at graduation in 1972, with Leverett House G Tower in the background.

Junior year in college, my three roommates and I struck gold in the Leverett House rooming lottery. We scored a quad suite in one of two modern towers overlooking the courtyard with a cavernous living room, our own bath, and three, count them, three bedrooms. Even seniors coveted these rooms, so we knew we’d be there for two years.

The stakes were sky high: the corner single.

We were a diverse group, as Harvard students go. Carlos, a preppie from a wealthy Puerto Rican family, spent most evenings at his elite “final club,” where his brother Jaime was also a member. Nick hailed from working-class East Boston, where we would occasionally join him at home for an elaborate home-cooked Italian dinner, course after delicious course. That left two suburban Jewish boys from the Midwest—Joshua from Chicago and me from Detroit.

But who would get which bedroom? Both singles were desirable, with windows on the courtyard, over which you could just see the Charles River. But one was a corner room, brighter and more spacious, with windows on two sides. And those who shared the double, across from the bathroom and overlooking a side street, were clearly disadvantaged.

We drew lots, agreeing to switch off for senior year. Carlos and I lost and had to share the largest bedroom. Nick got the smaller single, and Joshua won the grand prize—the corner single.

The first year was a challenge. The double room was barely big enough for two beds and two desks. My girlfriend Patti and I went shopping in Harvard Square and found an Indian cotton bedspread, which we hung from the ceiling, dividing the room meticulously in half. When she occasionally stayed over, the narrow, college-issue bed cramped our style, not to mention listening to Carlos snore through the privacy curtain.

But we managed. We hung out in the living room, which was furnished with a well-used sofa, a few chairs, and a coffee table. We’d do our homework listening to “Tommy” and “Abbey Road” and watch the 11 o’clock news and Johnny Carson on a tiny black and white TV. We looked forward to senior year and some privacy.

By the end of junior year, both Carlos and I were lusting after the corner single. Carlos, who played a lot of cards at his club, suggested a round of high-stakes poker to decide who got it. I accepted. Joshua, Nick, and Patti watched in suspense as the game played out.

It came down to the last hand—and I won! That fall, I moved proudly into my single corner bedroom. Patti and I splurged on a secondhand double bed and a cheap mattress. All that room! She stayed over more frequently. By mid-year we were engaged.

Carlos and Nick soon followed suit. Only Josh didn’t have a steady girlfriend. He hung out with Larry, a friend from upstairs, or with Patti and me, or, when I was in class or at my library job, just with Patti, cruising the shops in the square.

Flash forward to Commencement week, when our families came to Cambridge for graduation. While I was out, Josh gave a tour of the suite to his parents and two younger sisters. He opened my closed door (of what had been his room the year before) to reveal the unmade double bed—and a pair of Patti’s panties on the floor, where she had left them in her rush to get dressed that morning.

Josh’s mother was appalled. How could I leave the room like that, Josh mimicked her later, when I should have known his impressionable sisters would be around? They hardly spoke to us the whole weekend.

Two years later, when Josh finally came out, we weren’t surprised, but his parents were devastated. Although his mother eventually worked through her disappointment, it took his father the rest of his life to come to terms with Josh’s sexual orientation. Years were wasted—decades. We wondered what they would have given then to enter Josh’s bedroom and find a pair of women’s panties on the floor.