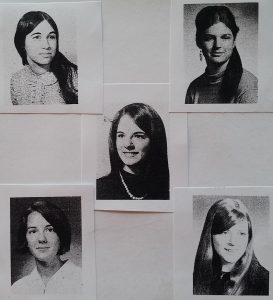 Freshman Register pix of all my different college roommates and me

Sometimes you can work it out, sometimes you can’t. I’ve had a lot of roommates, starting as a 17-year-old college freshman, and ending when I bought my first house at age 27.

CAVEAT: This story is way too long to sustain anyone’s interest, so I advise reading maybe about half of it. Once I started writing, I just wanted to describe all my roommates for my own benefit, lest I forget them when I get old(er).

Growing up I had my own bedroom, and my two older sisters shared a room. They often complained to my parents, but since my grandparents lived with us there weren’t enough bedrooms for all three of us to have our own. My parents said that one of them could have her own room if the other one was willing to share with me (the baby). Neither was willing to do that, so I kept my own little room until I went away to college.

My first roommate, Linda #1, appeared to be a perfect match on paper. We were both Jewish, living just outside New York City (she in New Rochelle and I in New Jersey), and were interested in government and politics. We wrote to each other over the summer and thought we would hit it off. BUT . . . apparently the Housing Office hadn’t asked the crucial question, or had ignored our answers. She was a morning person and I was a night person. I liked to wake up at 9:25 and run downstairs to breakfast in my pajamas just before they stopped serving at 9:30. I generally went to bed around midnight or later. She had an 8 a.m Russian class five days a week, so woke up early and went to bed early. And the worst part was . . . she shaved her legs in our room with an electric razor EVERY MORNING before she got dressed. Her shaver sounded very much like the alarm on my clock-radio, so I couldn’t even train myself to sleep through it. It was intolerable. I started being deliberately noisy when I came back to the room late at night and she was asleep, because I was so mad about her shaver. It’s amazing that we lasted as long as we did.

My second roommate, Linda #2, gets the Nobel Prize for self-sacrifice. Her assigned roommate, also named Suzy, had moved fairly early to a single in another dorm because the two of them were incompatible for their own reasons, and Suzy had entered with sophomore standing so she was eligible for a single. This left Linda #2 in their double by herself, which was a sweet deal. And yet she voluntarily offered to switch with Linda #1 and move in with me because she couldn’t bear to listen to my complaining any more. This was fine with me and Linda #1. Linda #2 was a townie, from Chelsea, Mass., and was still involved with her high school boyfriend. He would come over to our room and they would have sex. I think that was one of the things that bothered the other Suzy. I didn’t care, I just sat at my desk with my back to them and did my assignments. I didn’t see any reason to leave, I could ignore them and they could ignore me. So it worked out fine. Plus, Linda was more knowledgeable about sex than any of the rest of us, so it was great to have her around to answer questions.

One Saturday night, when Linda’s boyfriend had been sick for a while and hadn’t come to visit her, she was complaining about being horny. This was a new concept to me, and kind of interesting. We started talking about who she could have sex with to satisfy her cravings. I reminded her about these guys we knew in Kirkland House who had a four-person suite and never locked their door. She decided she would get up early in the morning and walk over there and climb into bed with one of them. I didn’t think she would really do it, but she did! When I woke up on Sunday, she was gone. Then a little while later the phone rang. She was calling me from Kirkland House to tell me she had done it. Then she put the guy on the phone to confirm it, in case I didn’t believe her. Apparently they had a pretty wild time, although I don’t think she ever saw him again after that. The next year she got a single.

My sophomore year roommate was Kathy. She and I were as different as could be. She had grown up in a Navy family, living in many different places, the last of which was South Carolina. Her high school boyfriend went to The Citadel, a military college in South Carolina, and she went down there freshman year to go to his prom or homecoming or something. She was pretty apolitical and didn’t do drugs at all. Despite being my opposite in both these respects, she was a wonderful roommate. We got along well and had fun together. Every five years when we go back to Cambridge for reunions, we always room together and it is a joy to spend that time with her. We talk and laugh and feel like we are 19 again.

Junior year I roomed with Barbara. We were supposed to be in a suite with Kathy and a fourth woman, but as a result of the complicated logistics involved with integrating the Harvard Houses, Barbara and I went to Lowell House, and Kathy and the other woman went to Quincy House. By that time Kathy was spending all her time with her Harvard boyfriend, so she didn’t care where she lived or who her nominal roommates were. Barbara and I adored Lowell House, and had a great time rooming together. We had met in Choral Society and both loved to sing all the time. We would walk around singing in harmony, songs like Crosby, Stills & Nash’s “Helplessly Hoping” and Bob Dylan’s “You Ain’t Goin’ Nowhere.” She was also involved in radical politics, so we went to a lot of demonstrations together. Our hitchhiking trip up the West Coast from San Francisco to Seattle is memorialized in Planes, Trains, and Automobiles. She graduated that year (she also entered with sophomore standing), and senior year I had a single in Lowell House.

After college I got a job in Cambridge, so I went to the Harvard Housing Office to check out “roommate wanted” ads. I ended up choosing a beautiful old house on Cambridge Street to share with three other women. Cathy was a nurse who worked right across the street at Cambridge City Hospital. Bonnie and Arlene were graduate students. Cathy later left to go to dental school and was replaced by Lita. When Lita came to interview, the thing she was concerned about was that we were four women sharing one telephone. She wasn’t sure that could work. We were also sharing one bathroom, but that didn’t bother her, it was the phone that seemed like a problem. She decided to move in anyway, and we managed to make it work. I’m sure the younger generation can’t even fathom the idea of four people having to share one phone. Out of all of these women, the only one I have maintained contact with is Arlene, who continues to be one of my dearest friends. She also appears in the story You’ve Got A Friend.

When I arrived in Davis for law school, I again relied on the university’s housing office to find a rooming situation. I answered a listing by Diane (pronounced Dee-Ann, as it turned out), and we liked each other so much I moved right in. She was a great roommate, and the fact that she wasn’t a law student probably helped keep me sane that year. I have written about her in two other Retrospect stories, They Say It’s Your Birthday, because she threw a surprise birthday party for me when it wasn’t my birthday, and Remember (Walking in the Sand) because we had a seder together in Hawaii after we bumped into each other on the beach.

Second year of law school I roomed with another law student named Jana, along with a woman whose name might have been Anita, who was training to become a firefighter. I ended up loathing both of them. The less said about that year the better.

My last year of law school I lived with Bonnie, who was a year ahead of me at Davis and had just graduated. It was a difficult time because she ended up flunking the Bar Exam and had to spend the next couple of months studying and then retaking it in February. That was a tense period around our house. Luckily she passed on the second try, although we didn’t know that until June. It really motivated me to study hard when I took it that summer, because I wanted to be sure to pass it the first time. Our friendship soured over a guy who moved in with me in May when he left his wife. I’m sure I bear most of the blame for that. When Bonnie moved out, I advertised for a new roommate and got Kim, who was a graduate student in one of the sciences. I don’t remember much about her except that she ended up going out with a guy named Kevin Bacon (but not THE Kevin Bacon). I think she ultimately married him.

Then I left Davis and bought a cute little house in Sacramento where I lived by myself. Jane lived across the street and also worked with me at the Attorney General’s Office. We carpooled to work and also spent a lot of time running back and forth to each other’s houses. When she had a big dinner party, we carried all the dirty dishes over to my house to put in the dishwasher, since she didn’t have one. We also shared a kitten, Loretta. That might have been the best roommate situation of all — across-the-street-mates.

12 Responses to We Can Work It Out