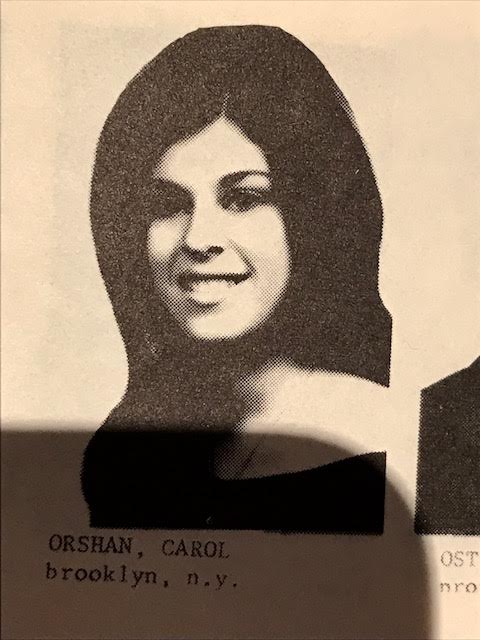 There was no Facebook or Instagram in 1970. I sent a postcard to Brandeis with my preferences: neat, non-smoker. Over the summer I received one back: Carol from Brooklyn. She received a similar one with my name and address. I later learned that she thought I would arrive in over-alls (the East Coast kids called them dungarees) with hay in my hair because I come from Huntington Woods. She didn’t understand that I lived in an affluent tiny town about two miles northwest of Detroit. Huntington Woods has no schools so we were educated in Royal Oak, at the time the seventh largest city in Michigan. No hayseed here.

From her yearbook photo (which was submitted for “New Faces”, the Freshman yearbook; the guys called it the “Pig Book” – let’s talk about the need for attitude readjustments!) one can tell she was good looking, but by the time she showed up, she had cut her hair into a chic shag and adopted the hipster uniform of the day: plaid shirt, jeans and work boots, along with dangling earrings. I didn’t have pierced ears. She had a boyfriend from back home and whenever he visited, I had to find a different place to sleep. She was a Psych major. I, a Theatre Arts major. We were very different, but at first, tried to find common ground.

We were both neat and non-smokers and that was a blessing. We attracted boys to our room like bees to flowers. I later learned that one wag had given us the  “TPR” award…that is: “Tits Per Room”! We had different taste in room decor. She opted for psychedelic wall art; I was into Renoir’s “Bather” from the Detroit Institute of Art and, after one break, came back with a poster of a handsome WWII flyer (my father, a photo blown up by my cousin). The girls on my floor thought the unidentified man must be some 1940s movie star. I rather liked that. 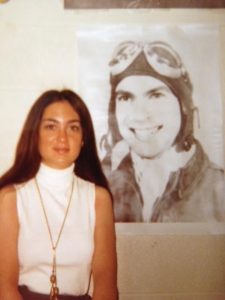 We took the train into Cambridge to shop once, early in the school year. I bought her earrings for her October birthday at Truc in Harvard Square. We did try to be friends, but were too dissimilar. She hung out with “cool” kids, some of whom mocked me behind my back (I discovered notes in her waste basket).

We had similar taste in music. That was a solid bond. Elton John’s first album played non-stop for a while during study time. She had a much better stereo system than I did and she let me play her records. I appreciated that.

She slept nude. I thought that was pretty cool, so I started to as well. She broke up with the guy back home and started dating guys on campus, often coming in very late at night, having screaming fights while I was trying to sleep. I stayed out of those.

She talked in her sleep twice. By second semester, she had arranged her schedule to have no early classes. I still had 9am classes most days, so was up at 8am every day. A dear friend had given me an old-fashioned wind-up alarm clock with a tiny hammer dinging two bells on top. It could rouse anyone out of a stupor and Carol hated it. One morning it went off, she sat up straight in bed and said, “Who do the think you are, the fucking ice cream man?” Another morning, out of the blue, she sat up and said, “Hello, goodbye, no exit”. She was reading Sartre. She claimed in both cases that she was sound asleep and had no memory of either event. I thought both were quite funny. Perhaps she was having acid flash-backs.

At some point during first semester, she decided it was time that I try pot, so got a group of girls from our dorm together, we all sat in a circle on the floor of our room and passed a joint. Much to her chagrin, I felt nothing. We mostly went our separate ways.

In the waning weeks of the school year, we finally connected and she saw that I was a real person, not some stereotype she had imagined. She had never come to see me in any of my theatre productions. We came to like and respect each other. She was quite bright.

We chose not to live together the following year. She lived with a math major in the Castle, an iconic women’s dorm, now being demolished as it is beyond salvation. It pre-dated Brandeis, was the original building when the campus was the Middlesex Veterinary College with dissection rooms in the basement. Legend goes when the famous architect Saarinen visited campus, he described the style as “Mexican Ivanhoe”.

I went into a suite with other women who clung to their mascara (as I did), several were in Gilbert & Sullivan with me and others were cheerleaders. We actually, occasionally wore a skirt. Carol and I visited rarely our sophomore year. Then she transferred to Stanford. Last I heard, she was living in a lesbian commune somewhere in the Bay Area. Always ahead of the curve.