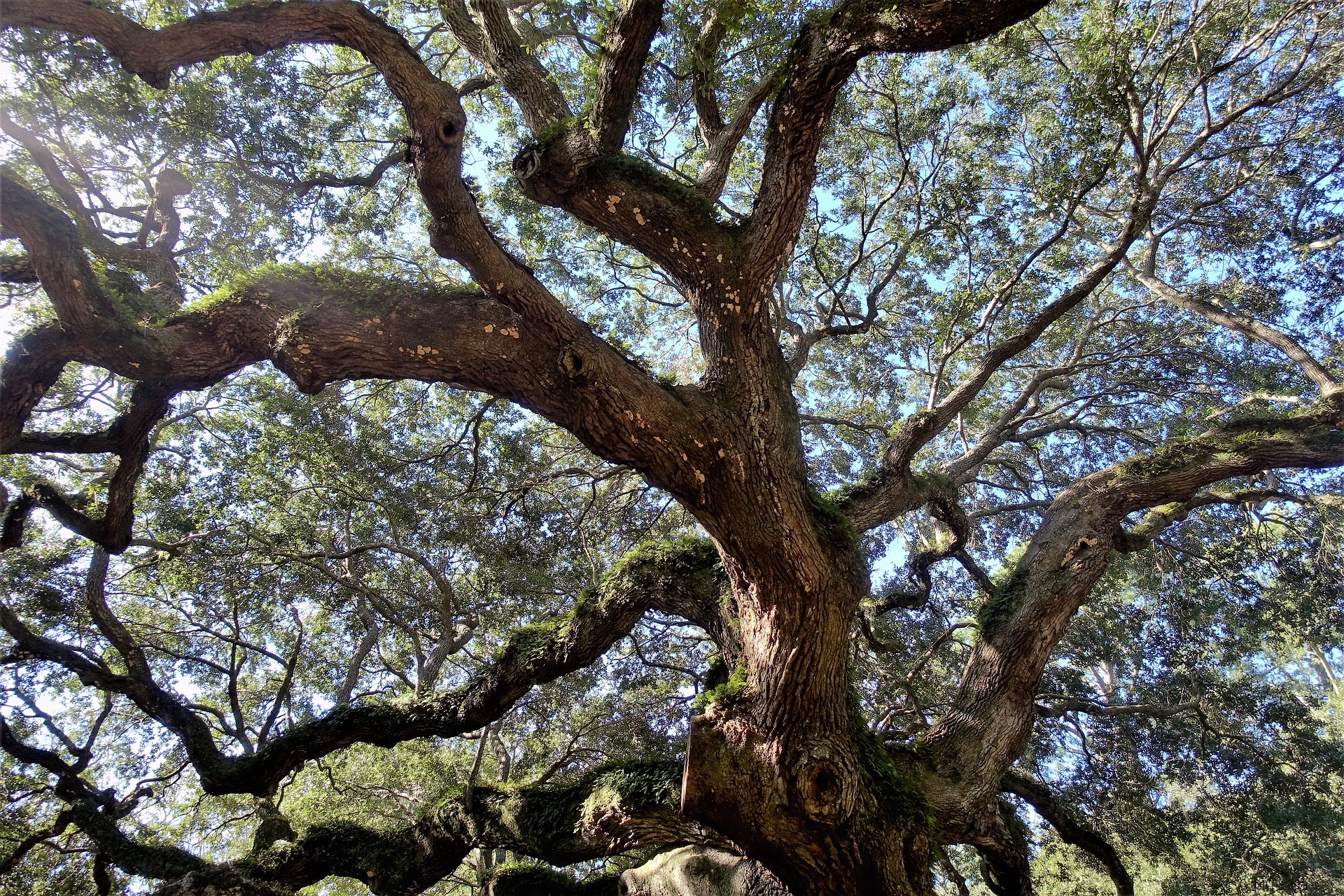 People who know me well are aware of two “suitcases” in my emotional baggage: my love of my late Siamese mix cat Latté, and my anxiety about trees. Tall trees creaking in the wind make me especially nervous, to the point that this past fall, I begged my partner Dick to have a large tree near my home office window topped off, which he did. He insisted it was perfectly safe, but the scraping noises on my window and the rustle of the leaves left me unable to concentrate. Here’s why.

I looked into the back yard and saw my enormous oak tree whirling like a cocktail's swizzle stick, and then with a huge crack and boom, the tree split into three parts, from top to bottom.

In the late 1990s I owned a small house on a large lot on Oak Court in Menlo Park, California. I’d bought out my soon-to-be ex-husband from the house as part of the divorce and ended up with Latté, the little cat we’d gotten shortly before the breakup (he took the other cat). Latté was so named because she was milky white with coffee-colored points. She was my constant companion, because I worked at home, and now being broke, never went much of anywhere.

We lived with hand-me-down furniture from a friend’s garage. Any extra money I put into maintaining my stunning yard. The area was part of what had been a huge chicken ranch in the 1920s, and thus the soil was incredibly fertile. The back yard was full of beautiful trees, including a strawberry guava, East Coast chestnut, and black walnut. Most magnificent were the many live oaks, which were at least 60 years old, and in particular one enormous tree dead center in the yard. Each day in the spring I could hear the birds chirping and see them build nests in the trees.

Latté and I developed a weekday routine. About 8:30 in the morning I would start work, and if the weather was nice, often would sit outside on my back patio with my documents and pens (this was when a lot of my editing still was with red pen). Latté would watch from indoors behind the screen slider. In this area she had to be an indoor cat because of the families of raccoons that marauded as soon as it got dark. About 9:30, I would take a break to go inside and feed Latté her breakfast.

The winter of 1997 and spring of 1998 interrupted our routine and brought drama to the home, when during El Niño the creek down the street overflowed and I had three feet of water in the yard. (See my story Fish in the Street, Snakes under Glass for the details of what happened.) So when the sunny spring of 1999 came around, it was a pleasure, and Latté and I resumed our routine. One especially beautiful morning in May, at about 9:15, I was out on the patio as usual when I noticed that the wind seemed to have picked up, and the rustling sounds were suddenly louder.

Latté poked her claws through the screen and meowed loudly. I turned around and said, “Latté, watch your claws, and it’s not time for breakfast yet.” Five minutes later, same poking and meowing. “Oh, all right, here I come.” I gathered up my editing work, got her food, and put it in her dish in the kitchen, but instead of eating it, Latté went back to the patio screen. Following her, I looked into the back yard and saw my enormous oak tree whirling like a cocktail’s swizzle stick, and then with a huge crack and boom, the tree split into three parts, from top to bottom.

My yard was obliterated, turning into oak leaves. One third of the tree had fallen toward the house, its crown covering the patio and touching, but not breaking the slider doors. I heard a second crack, and about a third of the large black walnut tree, broken by the oak, came crashing down on the patio, right where I’d been sitting.

What had Latté sensed? I’ll never be sure, but at that moment she looked at me quizzically. My next door neighbor Kathy’s voice rang out. “Marian, are you OK?” “Yes,” I shouted, as I got outside to the patio and slithered my way through branches. One-third of the tree had broken my back fence and was leaning precariously against my back neighbor’s roof, and the last third had crashed through Kathy’s fence but missed all structures.

“Not very much,” I replied.

When I got back into the house, I sat hugging Latté, and after about 20 minutes of deep breathing called my insurance company. Because the tree was leaning against a neighbor’s roof, they authorized emergency service that afternoon. At noon I took Kathy’s advice, found a half bottle of dessert wine, and took a glass out to the tree to wish it goodbye.

A couple of hours later a crew came by and started clearing and sawing. Oak trees in northern California have evolved in a dry climate, and the saturation of the soil from the last year’s El Niño had rotted the roots of my tree. It had disintegrated and died from the inside out. The crew sawed until dark, came back the next day, sawed for another 12 hours, and then rebalanced the injured black walnut tree. I ended up with a cord of oak wood in my side yard and a stump so large we decided to leave it as it was. Where there had been shade in the yard, there was now sunlight. Different, but very pretty.

From that time on I referred to Latté as the cat who saved my life. She lived a long life, and I never resented having to care for her when she became deaf and diabetic. She died of kidney failure in 2013, at age 19. By that time I’d had a number of tests and discovered I was allergic to cats, although I never had the standard symptoms, so I couldn’t have another cat. So as anxious as I am about trees, I’ll remember Latté with fondness and gratitude.

11 Responses to Saved from the Tree by the Cat