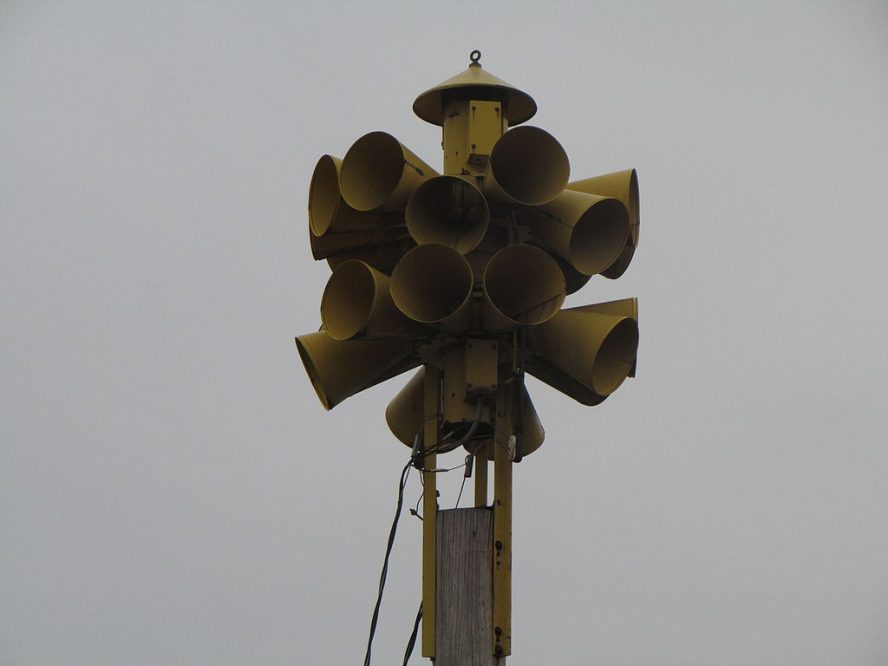 In 1962, while playing near the back fence, I noticed large construction equipment digging a deep hole in the center of the neighbor’s backyard. The next day, a cement truck poured a gray mixture into the cylindrical hole. Once the cylinder dried, a lid was placed on top of this contraption, which then looked like a giant can of peas without a label. I asked my parents what it was, and they hastily explained the basics of a bomb shelter.

The moaning whine infiltrated my nightmares for years. It became a reminder of a situation we could not ignore.

While the neighbor got busy placing nonperishable food and all sorts of supplies in the shelter, my parents explained, in terms a nine-year-old could understand, why I shouldn’t be freaked out. Although we were in a Cold War, a “hot” nuclear war was unlikely (they didn’t mention that a bomb shelter wouldn’t do much good if a war were to occur), and it was clear that my parents thought the neighbor’s paranoia was misplaced. At that point I couldn’t wrap my mind around a nuclear war, and because I was claustrophobic, I was much more concerned about how I could cope in such a confined space.

Several years before, in kindergarten, we were marched into a dark, brick hallway for a version of a duck-and-cover drill. We had to be seated on the floor, lean our backs against the cool, scratchy brick, bring our knees up, bring our heads to our knees, and cover our eyes with our arms. I peeked through a gap between my arms and knees to see bright yellow signs, with a symbol that I believe was an atom, which I determined was supposed to indicate where we were supposed to go when we heard—

Periodically I heard these sirens near the school and throughout my neighborhood, because they were often tested. The sound started with a whir and progressed to a creepy moan, then an annoying whine. While I guess the sound was intended to make people pay attention to it, for some reason to me it was the scariest aspect of the entire Cold War period. The moaning whine infiltrated my nightmares for years. It became a reminder of a situation we could not ignore.

Looking back from the standpoint of today’s many troubles and anxieties, I am amazed how well the adults seemed to cope in that dangerous time. It could be they were just acting strong for the benefit of the kids, or maybe they believed the Cold War had been a largely manufactured crisis. I definitely thought the bomb shelter and the school drills were silly, but there was something about the sound of the sirens that would not go away.

8 Responses to Shelters, Signs, and Sirens