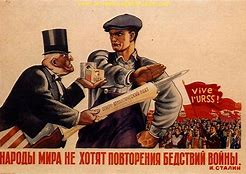 Most Americans regard the Cold War from a unilateral position. For decades, America stood armed and vigilant against the Soviet threat. For some, the experience felt righteous and reassuring. We stood on the bulwarks of freedom and democracy and were willing to make the sacrifice required to keep communism’s dreaded darkness at bay.

Others of us saw through the propaganda and subterfuge. We stood apart from the chauvinists, magnates, and militarists and the gray-flannel drones who drove the treadmills of post-war capitalism. We called out the hypocrisy of the American Dream and pointed to another America, riddled with poverty, racism and male dominance. We organized, we resisted, and we succeeded to generate an alternate narrative to the Red Scare.

From right and center, we were supposed to hate them… again. From the left, radicals struggled with how to accommodate the realities and contradictions of the Soviet Union’s impossible dream. But regardless of how we coped, we stood inalterably on the other side of the Iron Curtain.

But what about the Russians? How did they cope? In 1984 George Orwell described a world in which most citizens lived under shifting, perpetual war, saturating surveillance, and propaganda. To continue the state of war, necessary for ongoing subservience, the Orwellian state declared enemies to be friends and friends to be enemies in an endless swirl of loyalties.

It’s fitting that Orwell wrote 1984 in 1947, a year in which a fickle American leadership declared the Soviet Union, our ally during WW II, our enemy. The United States, victorious at the end of WWII, allowed our errand boy, Great Britain — who had suffered terrible losses during the war — to warn the world of the threat the Soviet Union posed to the “free” world.

So mother Russia, who lost half its peasant army until they withdrew from the Western Front in World War One, who lost 20,000,000 people as they led the fight against Hitler and the Nazis, once again became The Red Menace.  the Soviet Union openly admitted at the end of WW II that it would take them generations to recover from the destruction and sacrifice it had borne.

The United States and Britain, eager to reclaim their dominance over war-torn Europe and its battered resources, once again declared the Soviet Union to be our foe. As anti-communism re-established itself, our armaments industry no longer beat swords back into plowshares. The military-industrial complex that Eisenhower so prophetically described demanded that a state of war, even a Cold War, was necessary to liberty, justice, and the American way.  There was money to be made; friends became foes.

We engaged in horrific proxy wars in Korea, Vietnam, Afghanistan, Cuba, Angola. We aided the rebellions against Soviet satellite nations like Hungary and Poland. The war in Afghanistan, where we backed the CIA’s favorite Pashtun tribe, the Taliban, finally brought the Soviet Union to its knees in the early 1990s.

After the Soviet Union failed, we delivered an economic coup de grace by offering up managed capitalism to the vulnerable former Union, plans that fostered capital accumulation and practically guaranteed the development of oligarchies and mob rule.

Mother Russia had a right to be pissed off. Since the 1920s, just a few years after the Bolshevik Revolution, the brave experiment in socialism had been attacked by twenty-two nations. So, when I watch Putin fuck with us, I remind myself that we had been fucking with Mother Russia since they were reborn as the Union of Soviet Socialist Republics.

The Cold War was over. We had won. Won what? We had been using the Soviet “threat” as a demon to continue pumping public tax money into private corporate coffers of weapons manufacturers. Central America exploded. Iran Contra. Clinton. NAFTA. We enjoyed a few years before 9/11 where myopia settled in regarding most things international.

But just like two boxers going fifteen rounds, when two great nations battle, no one emerges unscathed. After Vietnam, American capital, culture, and the national zeitgeist fell into a deep depression. Of course, no one would admit it. As in Middle America, depression did not exist. No one understood post-traumatic stress disorder, but America was suffering from PTSD.

As a wounded imperial power, we struggled to find a new demon. We sold our industries to the highest bidder. We waged a war on drugs. We built a service economy on domestic consumption and tourism. We became cops of the world and ignited a terrible war in the Middle East. We inflated real estate bubbles and information bubbles, then exploded them, all for naught. We elected a lovely, eloquent President to keep our place at the global capital table for eight more years. But really, nothing made money like the Cold War.

Today, I know that the Presidential Idiot can’t keep any of this Cold War stuff in his head. He’s incapable of sequential thought. But I knew that the betrayal of our former WWII ally played into what today we might call Mother Russia’s reprisal. I don’t like Putin, I don’t like democracy undermined by cyber warfare, and I don’t like the exploitative, bling-based cruelty of modern Russia. But I do understand the Russian motive to create chaos. Revenge is a dish best served cold.

6 Responses to The Soviet Matter