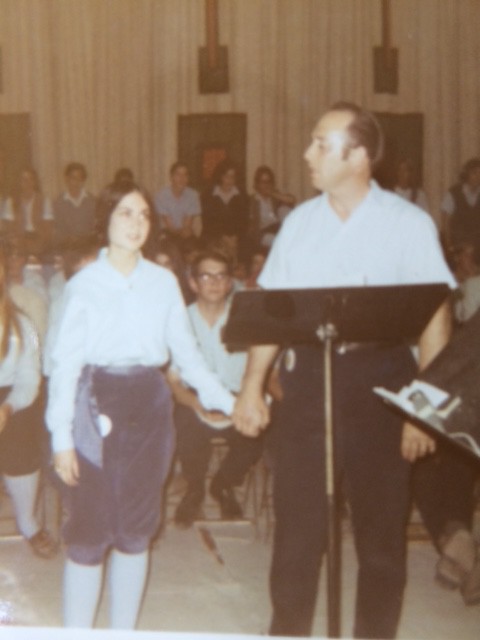 I was so shy, I was a skirt-hugger. I loved to play with my dolls, the kids in my neighborhood and was dazzled by the performing arts. My first love was ballet and I started lessons at the age of seven. With flat feet and a sickly constitution, I wasn’t very good, and often missed class, so despite being quite musical, my mother pulled me out of class, though I did get to see my teacher as the Sugar Plum Fairy in a local production of The Nutcracker Suite. I was hooked, though didn’t get back to lessons until an adult.

I took requisite piano lessons in 5th grade but watched The Mickey Mouse Club instead of practicing. I was, however, showing a talent for singing. When my parents’ friends came over, I was trotted out to sing Broadway show tunes, which my mother taught me when I was very young. I would sing “Oh, What a Beautiful Morning” full blast on my swing set to summon my best friend/next door neighbor to come out to play. I knew quite a repertoire of Rodgers & Hammerstein and Lerner & Lowe songs at an early age. But I was a misfit at school; smart, qawky, with glasses and buck teeth. And a bad hair cut. At about this time we moved from Detroit to the suburbs and things got really bad socially.

In the summer of 1964 I began attending the National Music Camp in Interlochen, MI (now the Interlochen Arts Camp) as a drama and voice major. There I fit in completely and made the friends of my lifetime, both in the cabin and in the classes I took. One counselor and one teacher made a lasting difference in my life.

My counselor in 1966 was Marilynn Andersen, universally called “Grundy” for reasons that were never clear to me. She was a warm, gregarious person who taught friendship by example and played a great folk guitar, prompting boisterous songfests. I was still quite shy and unsure of myself, as many 13 year old girls are. Grundy’s infections good humor and compassion allowed me to blossom. Eight weeks can make a lifetime of difference. In her train letter to me (an end-of-the summer ritual, written to each person in the cabin to amuse her on her way home; I obviously still have the one she wrote to me 50 years ago), she said: “An excellent camper you’ve always been all along, and you truly are a virtuoso in the the art of living. Keep your sense of humor, enthusiasm, and intelligence always about you, and you’ll never ever lack for friends.” No one had ever said that to me before. It is not an overstatement to say that going forward into high school, I developed a certain self-confidence that has stood me in good stead ever since.

The next summer, in High School Division, I was able to take Operetta with Clarence “Dude” Stephenson. I had taken it as an Intermediate, but the High School production had really serious singers and a huge chorus, frequently as many as 90 girls. The leads had wonderful voices, some went on to real careers in opera and inspired me to take voice lessons when I returned home. But I was never of the calibre to get a lead role in Dude’s Operetta (always a Gilbert & Sullivan, fully staged with costumes rented from Tracy & Co in Boston…always a highlight of the summer). But I am just five feet tall, and was a Drama Major. Dude would line up the chorus by height, so I always led the chorus on and off the stage and he would give me special bits to do, knowing that I would be fully in the moment and could carry it off. And he rewarded me by singling me out to win the Operetta Chorus Award all three summers that I was in the division, and as the best Female Chorus member for the first 25 years of Operetta at camp. The first year I heard my name called was surreal. I sat there, not at all expecting the honor and heard “Elizabeth Sarason”. No one calls me “Elizabeth”…ever. So I sat there, thinking the name was familiar, but it couldn’t be me, not little Betsy. Everyone was looking at me. And suddenly I realized it was me. From a group of 90 girls, I was singled out. I had been noticed. And I learned that as individuals we DO make a difference. We do the best we can, we put our hearts into whatever we do and our efforts are appreciated. We are not all soloists, but being part of the ensemble is just as important. I learned that from Dude.

I went on to have a successful career in tech sales, which takes a willingness to get up in front of people and follow through with strangers. And Dude and I remain friends to this day.