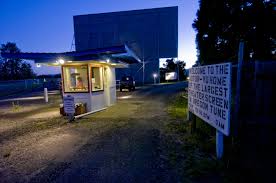 “There were several drive-ins around Spokane from the 1940s to the 1980s. A few lasted until the early 1990s. A family could take a fussy baby to the drive-in and no one complained. You could park near your friends and chat. Kids could play on a swing set near the screen. And, of course, a young couple could find some window-fogged privacy. It was a short walk to the concession stand for popcorn and soda….Ticket sellers at drive-in theaters tried to spot which carful of teens was trying to avoid paying. An employee, who lived across the street from the East Sprague Drive-In, said someone in his family often saw teens stop and hide their friends in the trunk before rolling up to the ticket window. Then he or someone in his family would call the ticket booth with the info. He was known to tell cheaters: “That’ll be six bucks. Two for you and $4 for the four guys in the trunk.”

I have several fun memories of drive-ins that I could share, but rather I’ll choose the one that stands out as the most…uncomfortable.  My first boyfriend was a guy from another high school in town, and neither of us had a car. So, unbelievably in hindsight, his father took us to a drive-in movie. John was a “bonus baby,” his father was a fair bit older and pretty gruff. Of course it was Dad in the front, and us in the back.  And every so often John would be bold and start smooching with me. How ridiculous with his Dad in the front seat, yes? And every so often when he figured enough was enough, Dad would clear his throat or wiggle around in his seat and we’d break apart.

Now the strangest part of it was, I needed to use the rest room fairly early in the show. But I was decidedly shy and exceedingly modest at that age. So I was embarrassed to even admit it, and just get out of the car and walk over to the restroom. Instead I sat there with the urgency increasing. My mind was a whirling dervish of discomfort from body and emotions. I thought the movie would never end, not to mention the drive home from the theatre.  Happily there isn’t some traumatic final scene to this story. I simply got dropped off at home, with none the wiser about my misery. I outgrew the shy, but a measure of the modesty remains.

One Response to Shy

Protected: My One Drive-In Movie Story
by John Shutkin