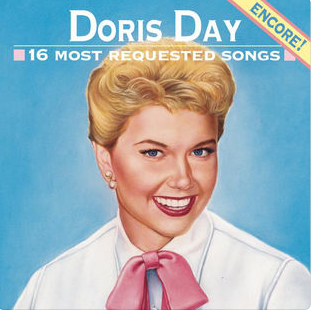 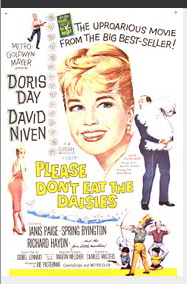 One might think that drive-ins would be a big thing in the Motor City, since Detroit was the birthplace of the car culture, but I have only one memory of going to a drive-in movie. As a youngster, the whole family piled into my dad’s Imperial. He owned a Chrysler dealership and always had the newest and best cars. One even had a record player in it…in the early 60s!

We went to see the Doris Day, David Niven vehicle “Please Don’t Eat the Daisies”, a family romp about a large family (and shaggy dog) who move to the suburbs of New York to a spacious, but ramshackle house and hilarity ensues. Niven becomes a theatre critic and goes into the city often, leaving Day to manage the house and rambunctious kids.

The song became a big hit for Doris. Very catchy…I can sing it right now, a real ear worm. It was a treat for my brother and me to wear pajamas in the car and squirm in the backseat while trying to see the movie, pestering our parents, like the kids in the movie, and generally having a grand old time!

Shy
by Susan
Protected: My One Drive-In Movie Story
by John Shutkin