Written in response to Forbidden Fruit 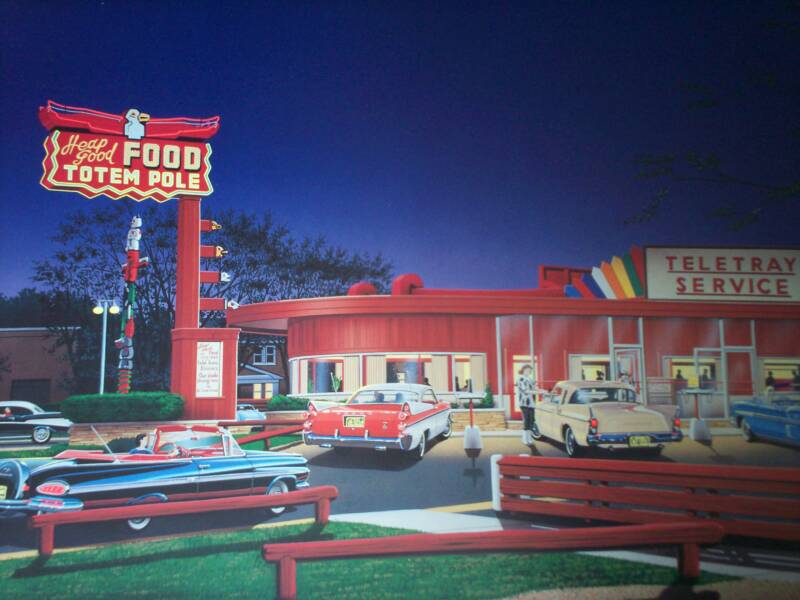 My favorite menu item at the Totem Pole Drive-In was the Big Chief Burger, an all-the-trimmings double-decker burger that was similar to but far better than the Big Boy they sold down the street, which itself was infinitely better than the Big Mac that arrived later. Despite the availability of barbecued beef, fried shrimp, and frog legs on the menu, I almost never ordered anything else. I learned this preference from my father, who would order (and consume) two at a meal. Plus sides of fries and vinegary cole slaw. Plus a chocolate milkshake. I could only aspire to that kind of capacity.

The sauce was a perfect blend of mayonnaise, summer vacation, Tom Terrific, rainbows, and ambrosia.

The Big Chief sounds standard now: two hamburger patties, two slices of cheese, sweet pickle slices (which I discarded), shredded iceberg lettuce, and a toasted triple sesame bun. The secret was the dressing, which was more refined, more flavorful than its competitors, then or since. I remember it as a perfect blend of mayonnaise, summer vacation, Tom Terrific, rainbows, and ambrosia. 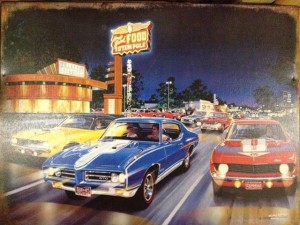 In the late ’50s and early ’60s, everyone went to the Pole—teenagers on dates, families with kids, frats, greasers. It was the epicenter of the Woodward Avenue cruising scene, which extended from the Pole to Ted’s Drive-In in Pontiac, eight miles north. But in the late ’60s it attracted a rowdier crowd. After a series of police incidents that culminated in a stabbing (or was it a shooting?), it closed. The next year, it reopened as a Burger King.

But you couldn’t get a Big Chief at a Burger King. I was in college in Boston by then, but every time I returned to Michigan and passed the place, my mouth would involuntarily start salivating.

What to do? I needed a fix. If I couldn’t get a Big Chief, maybe I could get the recipe. I opened the phone book and looked up Mrs. Hund, who owned the place (along with the upscale Northwood Inn and Club Berkley restaurants up the street).

There she was! I dialed the number, and she answered! (This was way before call screening.) I explained my dilemma and she laughed. Apparently I was not the first fan who had contacted her. No, she wouldn’t give me the recipe. But she had partnered with a food company, and Big Chief Dressing would soon be available at local markets.

Salvation? Each trip back, Patti and I looked in the stores, to no avail. Meanwhile, we tried to reconstruct it ourselves. But what to add to the mayo? We tried everything: dry or prepared mustard, garlic salt, onion salt, Lawry’s seasoned salt, pickle relish, a little ketchup. Nothing came close. (A recent Yelp reviewer suggested the key ingredient was curry—an exotic spice we would never have considered at the time. That rings true.)

Then we heard that Mrs. Hund had died, and with her, my dream of ever tasting a Big Chief again.

Flash forward a couple of decades. We hear almost simultaneously from Patti’s brother and my sister. A new restaurant called Duggan’s has opened on Woodward, a few miles north of the old Totem Pole. Apparently they bought the recipe before Mrs. Hund passed, and they are now serving … drum roll … authentic Big Chief Burgers.

On our next trip, with both eagerness and trepidation, we made our way to Duggan’s. It’s full of local relics from the ‘50s and ‘60s. From the Totem Pole they’ve got the actual neon thunderbird that topped the building, menus plastered on lighted signs, and vintage pictures of Fords, Buicks, and DeSotos packing every parking stall. (In one, a server places food on a tray that’s clipped to a car window, while two couples inside wait impatiently for the driver to distribute it.) But there’s more—memorabilia from other restaurants, photos of sports teams, photos of classic cars cruising Woodward, signs from Mohawk and Sinclair gas stations, and an actual Gulf gas pump. It’s a boomer throwback, where time apparently stopped 50 years ago. 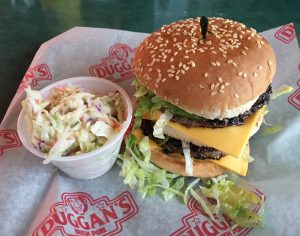 And the Big Chief? Almost unbelievably, it lived up to expectations. As we bit into our burgers, and the beef and bread and cheese and lettuce filled our mouths and the savory dressing coated our tongues, we looked at each other and we agreed, “This is it. This is how we remember it.” It was Remembrance of Things Past if Proust had been addicted to cheeseburgers instead of madeleines.

Duggan’s also bought the recipe for signature dishes from two other fabled Woodward drive-ins, fish and chips from the Susie-Q and a different burger from Ted’s. Just in case people get tired of Big Chiefs. That’s nice for them. I’ll never order any of them, but that’s nice.

When we go back to Detroit, it’s the Big Chief we want, because a Big Chief is more than food. It’s a portal to a time when our parents took us, or we took our dates, out to a drive-in and we had our whole lives ahead of us and all we had to worry about was how to scarf up every morsel of burger and every drop of dressing without dripping on the upholstery.