Prompted By In Trouble
6 comments. 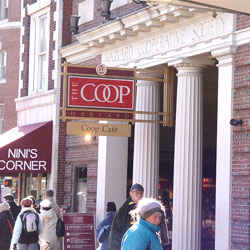 In 1971, Abbie Hoffman, the antiwar activist and Chicago 7 defendant, published a book entitled Steal This Book. In the book, he referred to America as the Pig Empire, and said it was not immoral to steal from it, in fact it was immoral not to do so. Many of my radical friends had the same attitude towards Harvard and its merchandising arm, The Harvard Coop. But wait, you say, the Coop is a co-operative society, and all Harvard students are members. We each have a member number, and we get to share in the profits, receiving a rebate check every year based on how much money we spent there over the course of the previous year. Stealing from the Coop is like stealing from each other. This argument did not hold water with my radical friends. Behind its cooperative façade, the Coop was still part of corporate America. It was a revolutionary act to steal from the Coop or any other corporation. No doubt the fact that security in the book annex wasn’t very good, and it was pretty easy to walk out with textbooks, made it even more tempting to embrace this tactic. And those textbooks, most written by Harvard professors, were so-o-o-o expensive!

I had not adopted this philosophy until one day, during my senior year, I went to the Coop Annex after a class to get the book The Amateur Democrat, by James Q. Wilson. I needed it for my senior thesis, which I was writing on the 1968 McCarthy campaign. Of course I hoped that Wilson, a Harvard professor, would be one of my thesis readers, and would be flattered that I was analyzing the campaign through the lens of his book. Surely he would give me a magna or even a summa. I found the book, put it on top of the notebook I was carrying from my class, and started walking to the cash registers. Suddenly it struck me. Who would know whether I had walked in with this book or not? So I bypassed the cash registers and walked out. I didn’t feel nervous, or guilty. I wasn’t in a hurry. I stopped on the second floor to pick up my rebate check from the year before. I browsed through other items in the main building of the Coop. Then I walked out the front door to head back to Lowell House for lunch.

I was halfway across Mass Ave when a man tapped me on the shoulder. I looked at him, annoyed. “Excuse me, I need you to turn around and come back to the store with me.” “What?” I said. “Come with me right now.” He flashed some kind of badge or ID and grabbed my arm. We walked back to the Coop. He took me to a small office inside the store. “You stole that book.” “No I didn’t.” “I was following you, I saw you take it.” I don’t remember the rest of the conversation, but the upshot was that I had a choice. If I continued to deny stealing the book, he would have me arrested and prosecuted for shoplifting. If I signed a paper admitting I had done it, they would simply take the book back and revoke my Coop membership, and that would be the end of it. In addition, I was never to set foot in the Coop again. So I signed the paper and left.

Looking back now, with my legal training and experience, I wonder what I would advise my 20-year-old self. I have never practiced criminal law, and I certainly don’t know the intricacies of Massachusetts law, but I think I would be inclined to fight it. (Hell, I even fight parking tickets!) Who knows how that would have turned out!

I ended up buying a copy of The Amateur Democrat at the other bookstore in Harvard Square (yes, there actually was one other bookstore in the Square), since I still needed it for my thesis. I’m sorry to say that James Q. Wilson did not take the bait and sign up to read my thesis. Instead I had two graduate students, who did not appreciate the brilliance of it. And I actually did go back into the Coop occasionally after that, although it always made me nervous, and I certainly didn’t use my Coop number when I bought things there.

6 Responses to Steal Away (Into the Night)