Prompted By In the Band
8 comments. 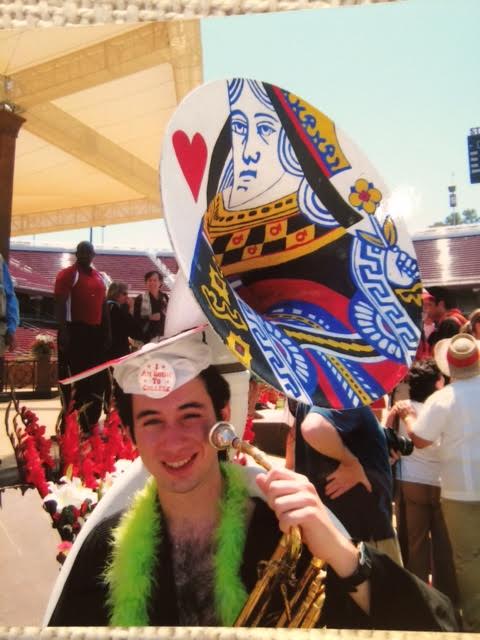 David came home for Christmas break from Stanford freshman year and announced he was going to join the band. I scoffed. He had played piano in elementary school, so perhaps remembered how to read music, but knew no other instrument that would help in a marching band. “What will you play,” I queried, “the triangle”? “They will teach me an instrument”, he replied. And so they did…the tuba, or more properly, the Sousaphone. You must understand, David is 5″6″, so somewhat overwhelmed by the size of the instrument. I suspect that was part of the joke.

The Stanford Band is notorious. They are a scatter band. The do not march in formation, they run to their positions on the field to make whatever formations are required for the desired effect. They try to be witty or political, but frequently are offensive. Before David’s time they were banned for life from ever again playing at Notre Dame because their drum major conducted the band with a crucifix. Later, same result with Brigham Young where, during half-time their dancers, known as “Dollies” came out in wedding veils and the announcer said, “Marriage…a sacred vow between a man and a woman, and another woman, and another woman…” Well, you get the picture. Political commentary didn’t always go over well; BYU was not amused. There was a travel ban for a while, since the kids got drunk on their way home from an away game and literally tore up the bus.

Much of this was before my son’s era. He worked hard to learn his instrument and found a real social group within the ranks of bandmates. Their repertoire was contemporary. They were the opening act for The Who once. We went out twice to see them perform; once to a basketball game during his sophomore year, and to the “Big Game” (vs. UC Berkeley) his junior year, just before he left for Thanksgiving break. He was section leader by then and worn ragged with all the responsibilities, parties and pep rallies they had to perform at. We had to wake him from a stupor to get him to the flight home. They even perform at former band members weddings from time to time.

Between his junior and senior years, he stayed at Stanford to work in a physics lab (that being his major). A few friends were there that summer as well. At the end of the summer, the band moved from their old “band shak”, where instruments were stored and they rehearsed, a truly dreadful, filthy, run-down modular building, to a newly refurbished, million dollar building. The kids on campus worked for several days to move everything over. They were told the old Band Shak was coming down the next day. There was a long-standing tradition to destroy the old one. At one time the university president had even joyously joined in the destructive fun.

By this point, there was no faculty oversight of the band. The administration had given up trying to regulate them long ago. A fellow bandmate contacted David and a few other kids. She said she had permission from the person in charge of the band to demolish the old Band Shak. So, late at night, four kids went in with sledge hammers, paint, and food and REALLY messed it up, since they thought they had permission and because it would be bull-dozed the next day. They knocked out windows and walls, sprayed it with graffiti, smeared it with condiments. It had been unseemly before (my shoes had stuck to the floor when we had visited it a year earlier). Now it was the after-photo from Demolition Derby.

The next day the tow truck showed up. It turns out this was a RENTAL modular building and it wasn’t being torn down – it was being removed and returned! Palo Alto police and Stanford police were called. The four kids were questioned. They were stunned. These were all good kids, honors students, no complaints against them ever and they had not been drinking. They honestly thought they had permission to do this. (Turns out the supervisor, who was also a student, had winked, and said, “I can’t actually say it’s OK to do this, but don’t get caught”.)

The police didn’t press charges, but Stanford considered this a violation of their honors code and demanded to know who else had defaced the property throughout the years. The list grew a lot longer. They were hauled before the Honors Code Board, made up of faculty and students, but the meetings kept being put off, so this hung over David’s head for most of his senior year. He didn’t know if he would graduate or be suspended. The band was suspended for all of David’s senior year, though there was a brand new stadium. The dedication and games went on without the band. In March of his senior year, the ruling finally came down that there would be no punishment, since Stanford had tolerated this behavior for years without ever trying to rein in the behavior. After David graduated, the band was reinstated, but now with administrative oversight.

The whole episode soured David on his alma mater, leaving a permanent scar.

8 Responses to The Band Shak