The First Shall be Last by Tom Steenburg
50
(58 Stories) 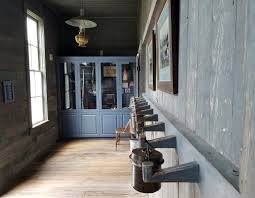 Here I go again, quibbling with terms.  “First Dates”: just what does that mean?  Both “first” and “date” are not so obvious.  At least to me.  I’ll start with early encounters, and I do mean early: 1956.

There is something liberating about a “date” when, from the outset, both know that there can be no future.

Second grade.  True confessions.  I made out with Susan in our classroom cloakroom.  Not exactly a “date”, to be sure, and perhaps the result of a dare.  But it happened.  Before witnesses.  Remember “Clue”?  J’accuse: Tom in the cloakroom with chapped lips.  Two take-aways: (a) turns out girls don’t have cooties, and (b) this mushy stuff is not at all bad.  Oh, and I still can picture Susan vividly.

Same year, a bit later. Melba.  Now this probably constituted a date, objectively, but I don’t remember that we saw it that way.  A movie.  A Saturday afternoon matinee, of course, but, then, we were, what? Seven years old? “The Ten Commandments”.  How’s that for a date movie? And we saw it all the way through, except for rest room and concession stand breaks (it was, of course, a very, very long movie.)  I don’t remember any cloakroom-like activity, though.

Now what was going on in 1956 that might explain this early start?  I really have no idea, but I do remember that it was that year that the city started fluoridating the water supply.  And, perhaps, fluoridating leads to all sorts of dating.

Dating in my teenage years was complicated by the fact that I attended an all-male boarding school.  I went home for school vacations and summers, of course, but as a consequence of being absent for the school year my public school circle of friends faded into the background.  Fortunately, there were a number of us private school kids, male and female, in the same situation so we hung out together.  No dating, really, just good companionship.  And a bit more.  We were hormonal teenagers, after all.

“Dating”, as such, was essentially non-existent during the school year.  Our school collaborated with neighboring girls’ schools for a handful of dances each year.  These were stilted affairs – really group blind dates – made all the more so because the live music for these events usually was provided by our school’s Dance Band, of which I was a four-year member and leader my Senior year.  The Dance Band was modeled on the swing bands of the ‘40’s – think Glenn Miller and Tommy Dorsey – and we played largely the music popular in their heydays.  Now playing that kind of music was terrific but it was entirely out of place in the ‘60’s.  But no matter.  We just played slow stuff so that couples could, well, you know.

Fortunately, I did have an opportunity to participate occasionally, and one such dance was memorable. The protocol was that our school would send a list of attendees to the girls’ school, and the girls would pick their “dates”.  With no prior knowledge of these match-ups, we arrived on campus and were escorted to an area to await summoning for the “big reveal” – the introduction to our date for the evening.  On this occasion as I walked toward my destiny an attractive youngish faculty member leaned in and whispered to me, “You’re in for a big surprise.”  Now, that’s not necessarily the most encouraging of sentiments under the circumstances and I wondered just what I was in for.  But she was right: “Zoe” was a delightful exchange student from Britain.  There is something liberating about a “date” when, from the outset, both know that there can be no future.  We were free to simply enjoy one another’s company, and we did. I don’t remember her face now, but, then, we were two ships passing in the night.

My memory of college years dating is a bit fuzzy.  Most if not all relationships grew out of casual and serendipitous introductions, and pinning down a “first date” is difficult.  Even my senior year when I met the woman who would become my first wife. That year the entire campus went co-educational – actually “coresidential” was the term – including our House of about 350 residents.  I was buttonholed by a House mate to help him move a refrigerator for a couple of our new female residents soon after the semester began, and things evolved from there. Nancy and I used to joke that we lived together before we even met, let alone went out, and I guess that was true.

And then.  There’s no good way to put it, but let’s say my marital experiences were, well, we’ll leave it at “multiple” including the one that produced singlehood again about nine years ago.  And after a two-year hiatus I found myself DWS: Dating While Senior. Match.com

No reason to get into specifics, but it can be quite a “through the looking glass” experience.  I was fortunate and found someone quite quickly, and we’re still together now seven years later.    But an earlier potential match turned into another memorable date.

When we first met over coffee Laura and I talked about tango.  Some background: at a college reunion some years earlier, a classmate organized an introductory class on tango, and it was great fun.  Laura had noted in her profile that she was an aficionado, and that was part of the reason I reached out.  Anyway, she mentioned that her tango club was holding a Halloween “milonga”.  Costumes were encouraged.  I was intrigued in part because I thought, well, I’ll probably make a fool of myself as a pure novice but in costume and masked, what’s there to lose?  So we made a date.

This was 2012.  I decided I would go as “Oven Mitt”, proprietor of Oven Mitt’s café (Tag line: “Always Just Right”).  I wore a chef’s tunic plastered with labels promoting the café, such as “Proudly serving only 1% milk” and “We knead dough for those who don’t”.  And a full Mitt Romney mask.  The event was great fun.  I was just as inept as I had feared, but the group could not have been friendlier nor more welcoming.  And Laura and I, realizing that geography made continuation highly unlikely, just enjoyed ourselves.  Just like Zoe and I so many years before.  Seems that when first dates are by circumstance last dates as well, and known to be such, they can be very special. 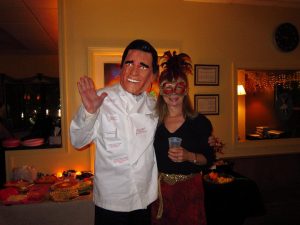 12 Responses to The First Shall be Last